President declares there won't be any turning back 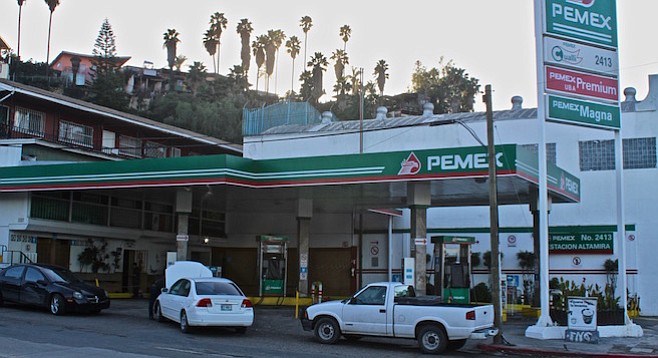 Gas prices went up more than 20 percent in Mexico on the first Monday of 2017 (January 2). Protests and highway blockades started the same day over what is being referred to as "El Gasolinazo." 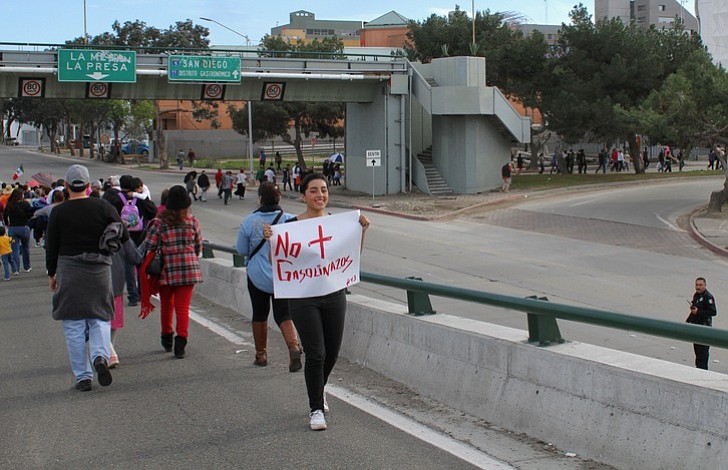 Panic spread through social media and the next day the protests became bigger. Families started to stockpile gasoline in their homes, depleting gas stations. Citizens reportedly looted gas stations and stores, resulting in over 600 arrests and 5 deaths. There have been reports of policemen joining the ransacking.

In Baja, protesters formed a blockade outside the Pemex fuel depot in Playas de Rosarito. It resulted in the closures of more than half of the gas stations in Tijuana. The ones that remained open had long lines, sometimes of more than 50 cars. 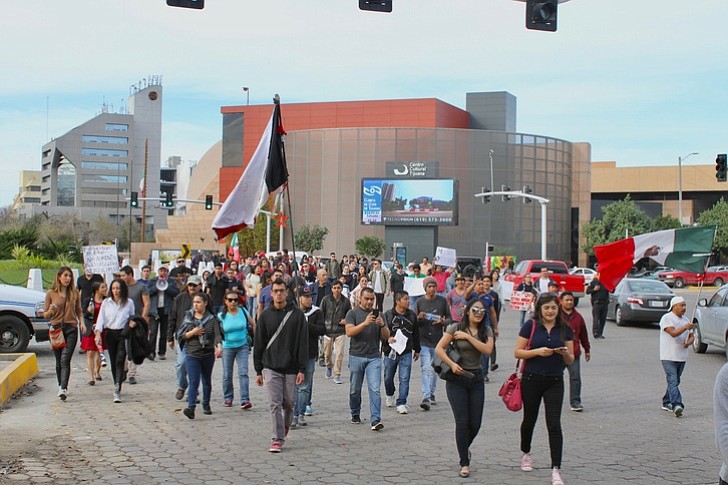 Friday morning (January 6), at around 4:00 a.m., federal police arrived to remove the protesters and allow tanker trucks to resupply the gas stations. Police convoys accompanied the trucks. After nine hours of struggle, federal police left, allowing the protesters to again form a blockade. Gas shortages and protests are expected to continue throughout the week.

Those who can are driving across the border to fuel up at U.S. stations.

“Out of nowhere they told us to close everything because they were coming to saquear [loot],” a retail employee at Tijuana's Plaza de la Tecnología told me. “They kicked everyone out around 6:30 p.m., supposedly because a riot that started in Parque Teniente Guerrero was headed this way. There was a collective psychosis — we are not prepared for something like that....

“I was going to call you to come record,” the employee told me. “But the guards started hitting a guy with a belt because he was recording. [Guards] always take advantage just to feel like a symbol of authority. It was only an alert and nothing happened, I guess because we closed everything on time.” 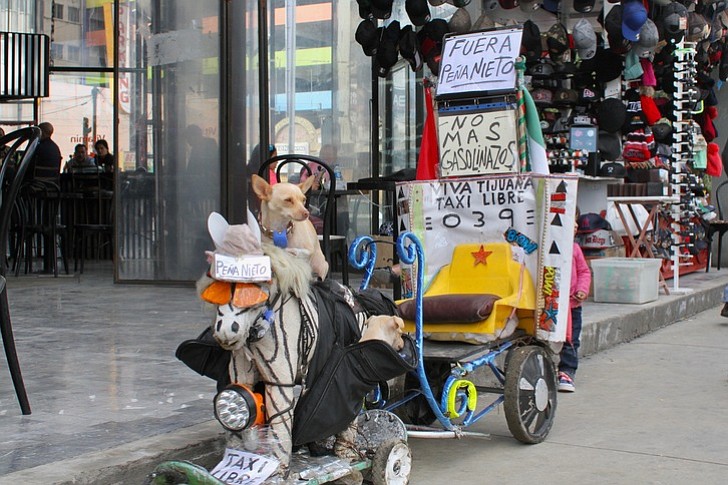 Despite reports of unrest on the street, Juan Manuel Gastélum, Tijuana’s new mayor, told reporters on January 6 that there hadn’t been any official reports of looting in the city. He also told citizens to protest in a peaceful manner and not to resort to the looting activity that had been reported in other Mexican cities; he claimed the videos and images shared on social media were not recorded in Tijuana or had been exaggerated. 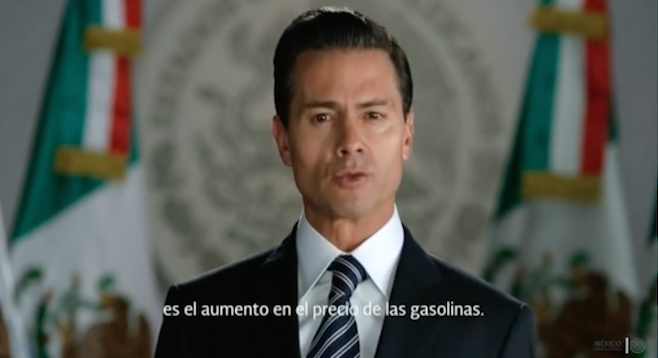 Stores are on high alert, especially those that have been targeted through Mexico (e.g., Costco, Elektra, Walmart). Facebook and Whatsapp groups created to coordinate saqueos (lootings) are promptly taken down. For the first time in my five years living in Tijuana, I recommend people not visit, much less do a road trip to Mexico.

“What would you do?” Enrique Peña Nieto, the president of Mexico, asked the people at a press conference on January 5 after explaining why prices were hiked. Mexico has subsidized gas prices for the past six years. The president asked for calm and strength from the citizens since there will be no turning back from the raised price.

The peso also continues to drop. The morning after the gasolinazo, Mexico's currency went from averaging 20 pesos to a dollar to 21.50.

Journalists for Frontera and El Mexicano have reportedly been assaulted and illegally detained by federal police in Rosarito. A video has emerged showing a truck running a police blockade, injuring more than four officers who faced down the truck with handheld shields.

Many gas stations remain closed. Transporting gasoline from the U.S. to Tijuana is illegal.

Truck running over police in Rosarito 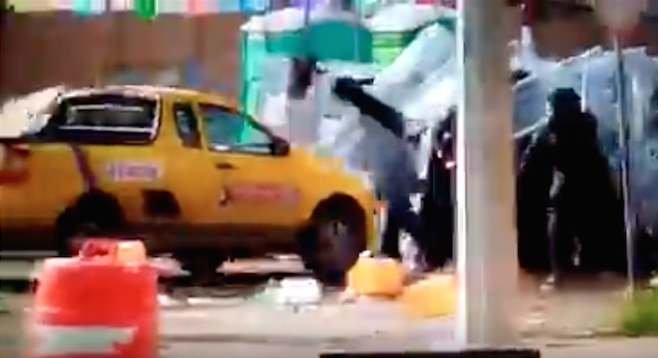 In some typical Mexican doublespeak, El Presidente announced that the prices were being allowed to adjust to international pricing. If so, why are the new prices higher than those here in high-cost California? And if they are being allowed to follow market pricing, why was there a decree that raised them to a preset level? PEMEX has had those fixed prices for decades, maybe for its entire existence. Sometimes they looked like wonderful bargains to US drivers, other times they were higher, and nobody knew why. Well, they did know why, in that some bureaucrats and politicos in Mexico City were setting them arbitrarily. (For those with long memories, in the late 70's PEMEX sold diesel for $0.15 a gallon. Those diesel Benzes were most popular cars for US types to own back then. But they had to drive across the border to get that ultra-low price.) Is the notion of price competition among stations such a hard concept for Mexico?

The Mexican government now has taxes of approximately $1 dollar per gallon on gasoline. In the USA the average tax burden in a gallon of gasoline is 48 cents. Mexico raised the gas tax to make up for government revenues lost from Pemex, the national oil company. That is why gas in more expensive in Mexico. But in typical Mexican fashion, they lied and blamed it on market prices. The Mexicans have now figured all this out, that the government is pissing on their leg and telling them it is raining.

The quicker we build the wall, the better. Soon, they'll be rushing the border when their country collapses.

The protests have turned my work commute into a nightmare. On the buses and trolleys it consumes most of the chatter. One thing is very apparent. The Mexican government and their media stooges keep repeating that the protestors are small in numbers. That is true but they have the semi quiet support of a lot of folks. As my grandpa would have said of the situation, "The water isn't boiling yet but it's simmering."

Could that country maybe, just maybe, go through a Trump-style rebellion against their establishment? This presidente is PRI, if I recall correctly, and now makes his PAN predecessor(s) look like statesmen. When, oh when, will the Mexican people decide they have had enough from these political parties and their hack candidates? Neither party has really made any progress, even though each departing presidente claims to have made a grand turnaround.

And wouldn't it be nice if our south county area were not so tightly bound to TJ with all its foibles, nuttiness, homicides and mordida?

3rd world country on our border, the place is not civilized

@913pm. If the people down here do go anti establishment I think it will be to the left with AMLO and not to the right like the US did. But a lot can happen between now and then.