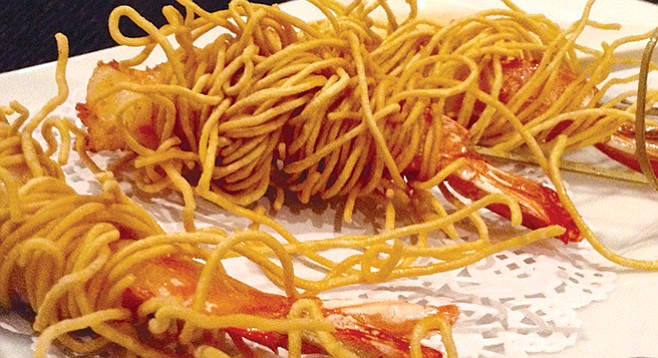 ’Cause I keep seeing Thai cuisine on lists of the world’s healthiest diets. And especially my all-time fave soup, tom yum kung, the lemongrass and ginger soup with shrimp and herbs such as coriander and turmeric. Delivered searingly spicy hot, of course. They say it helps treat colds, tummy troubles, weight problems, the whole nine yards. One big steaming bowl of antioxidants, you might say.

I’m thinking about this right now because it’s the morning after the annual triple whammy: Christmas, Carla’s birthday, New Year’s. All in one week. Only now coming up for air.

I’m in southern La Jolla, in this eatery cluster on Pearl Street near Fay. And looking for an HHH. Healthy Happy Hour. Tall order, because most of these places are way too rico-suave for happy hour, healthy nosh or not. Plus, it’s going on 6:30, and places that do have happy hours seem to have them from, like, 3:30 to 5:30, when they know none of us will be off from work yet. 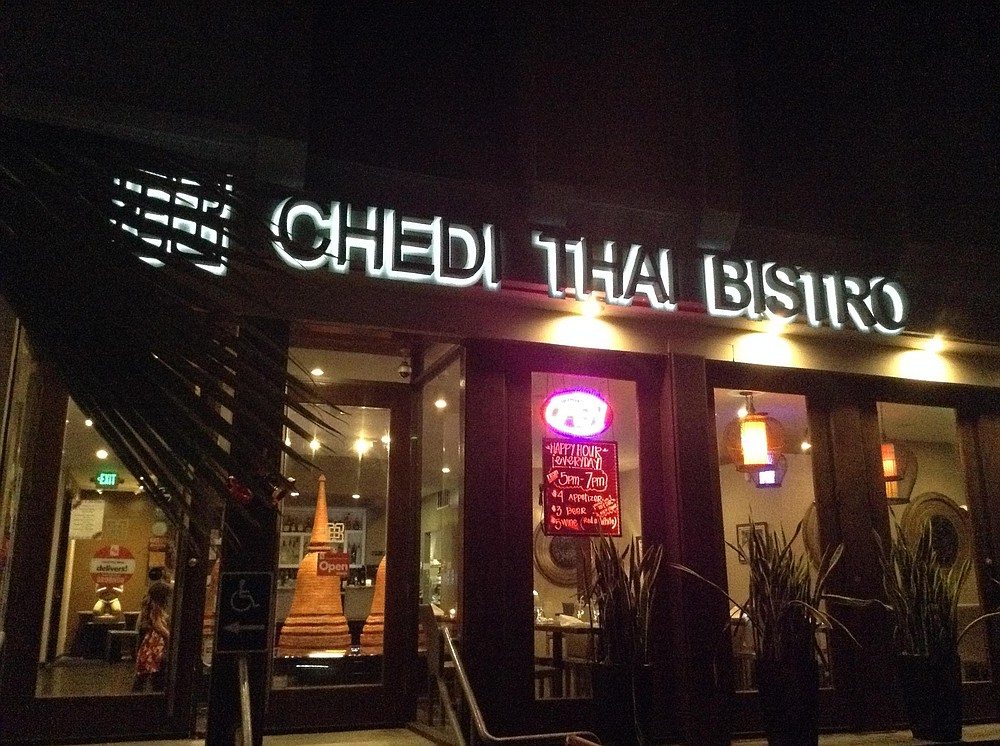 Chedi Thai Bistro: Kick off the Year of Eating Healthily with a Thai feast

I wander down Pearl anyway, past a CVS store, Dick’s Liquor, Sammy’s Wood-Fired Pizza, and Don Carlos Taco Shop, when this elegant-looking place shows up.

“Experience Contemporary Thai Dining,” read the letters stuck to the wall. They peek out from behind a row of mother-in-law’s tongue plants.

“Chedi Thai Bistro,” says the main sign. I did a lot of wandering in old Siam. Chedi are like stupas. Great round domes rising out of the earth, usually where a revered Buddhist monk has been buried. 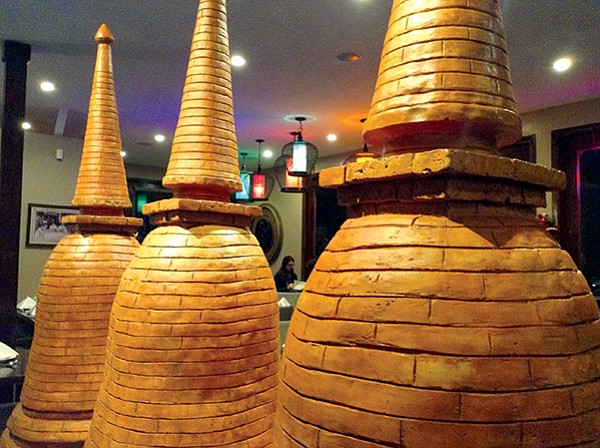 The restaurant’s three chedi, mock-ups of the structures built over burial sites of revered Buddhist monks

And, wow, looking through the glass doors, I see three eight-foot-high orange chedi plonked smack in the middle of the restaurant.

It looks expensive, but I notice an illuminated blackboard hanging in the window.

So now I’m waiting at the desk inside. The tables are filled with an interesting combo of elderly couples and groups of parents and kids from, like, India, the Middle East, plus mixed anglo-Asian families. I like the international flavor.

Eddy, at the desk, says yes, they’re still good for happy hour. He escorts me to an area behind the chedi and hands me the HH menu.

I’m expecting a listing of maybe spring rolls and dumplings. But, no, we’ve got 14 items to choose from, four bucks each, and a lot look interesting and healthy. Like larb chicken, the Lao salad dish. High protein, low fat. Or steamed shrimp or vegetable dumplings. Or crispy root vegetable spring rolls, or — maybe not your healthiest, but tempting: Angel Wing, fried ground chicken with bean thread, black fungus (and I thought black fungus was just an Aztec thing), and garlic, all stuffed in a chicken wing, plus sweet plum sauce.

Sigh. Greed cometh before the fall. I end up going for four items. Sixteen buckeroos: green-papaya salad, larb chicken, Golden Triangle (fried ground chicken and shrimp with cheese in a wonton wrap, plus a sweet pineapple dipping sauce). And something called Shrimp Sarong.

The green-papaya dish has three asterisks beside it. Meaning, max heat. Server named Bee brings it, in a white oval dish. She’s from Laos. So, yes, it’s strips of “green,” meaning unripe papaya. Actually, they’re white, not red like the mature flesh, mixed with little tomatoes, long beans, chili and lime. Simple enough but so sweet-tasty; and good heat. You munch some of the papaya then cool down on the big lettuce leaf that comes under it all. Papaya’s chewy, but the taste — dessert cucumber? — with the liquids and the other veggies is strong, sweet, tart, and rescued from being too sharp by the cashews. And good for you? Believe it.

The larb salad is ground chicken and tastes like it has only “cooked” in the acids of the lime juice and fish sauce (though it has been fried up). The mint leaf and red onions and sauce keep it light and give it pep. (Though it has nowhere the heat you get in “real” Lao places like the Lao Community Market on Imperial Avenue. These folks are letting La Jollans off the hook, but it’s still delicious.)

Okay, I compromise with the other dishes. The yummy Golden Triangles (named after the place where Laos, Thailand, and Myanmar meet — a notorious opium area) are just cheesy and crunchy enough to feel more wicked than they are.

But the one you really don’t want to eat, because it’s such a piece of art, is the Shrimp Sarong. Three stout red marinated fried shrimp tied up in a net of crispy egg noodles. They’re good on their own, but with the sweet chili sauce that comes with them, plus those crispy noodles, they’re the tops.

Boy. Nice for the price. And I see at lunchtime they have a $10 prix fixe menu. For that you get two “first course” dishes like the happy-hour choices, plus a second course entrée. You pick from 16 dishes such as green curry with chicken, or panang, or Tilapia Pad Prik King.

So I’m leaving stuffed but not bloated, thanks to all that unripe papaya and the lettuce leaves I’ve been chomping away at.

All in all, not a bad kick-off to the Year of Eating Healthily.