With new nonstop flights from S.D., find your Lost in Translation moment. 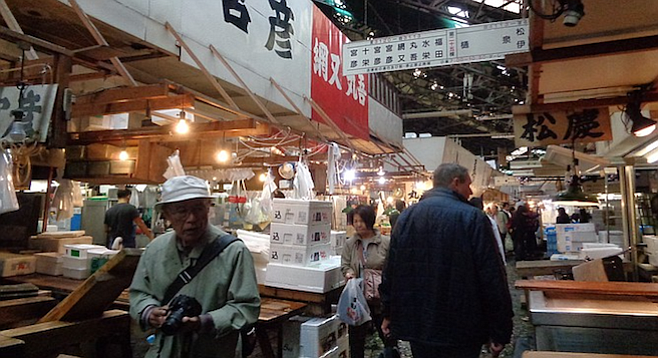 Japan had been on our vacation destination list for decades, but it always seemed too far away and too expensive. This year, noticing a substantial drop in airfare prices and the introduction of an 11½ hour nonstop flight from San Diego to Tokyo, we decided to pounce on the opportunity to visit.

We've all heard the urban legends of the crowding and exorbitant prices — and who can forget the iconic pictures of the subway workers cramming people into subway trains. We wanted to travel there to see if any of it was true... and of course to see the giant Godzilla we had heard about.

Transit and walking are the best way to see just about any city, and Tokyo is the ultimate commuter city. In many cases the directions from Google Maps told us it was fastest to go by subway. It was busy, but we saw no shoving, even at rush-hour.

Our budget-priced hotel room near Shimbashi station suited us just fine, and was located a healthy walking distance from a lot of things we wanted to be near: the Imperial Palace grounds, the upscale Ginza district, Tokyo station, parks and gardens near Tokyo Bay.

In the cool, overcast late October morning, we tried to get to the Tsukiji Market early. Too late to get into the viewer's box for the tuna auction, we explored the diverse outer markets until the fish market was open for regular visiting. The fish market had wet floors, slippery fish, cleavers, blood and little trucks zipping around, but they let us walk around anyway.

Just outside, there were small food stalls with long lines where we had the freshest sushi ever. 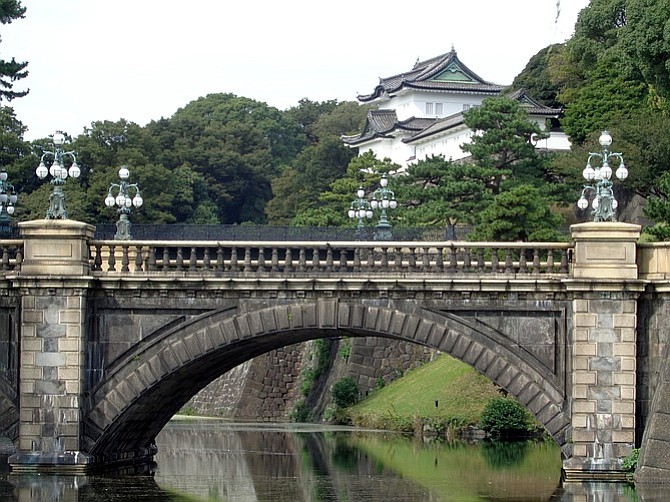 Having a general idea of which direction to go next, we made our way to the Imperial Palace Gardens. Gladly we found plenty of local signs on the street with the handy "you are here" marking to tell us where we were in relation to things around us nearby. As we were consulting a sign to plan our walking route, a nice Japanese lady in a dark business suit stopped to ask if we were lost and if she could help, even though she looked like she was on her way to work.

We could see an expansive, open green space across the bridge, with manicured pine trees that looked almost like enormous bonsai, and a classic Edo-period Imperial Palace atop a hill. As we approached we joined the throngs of visitors from all over the world taking pictures in front of the 19th-century Nijubashi bridge. 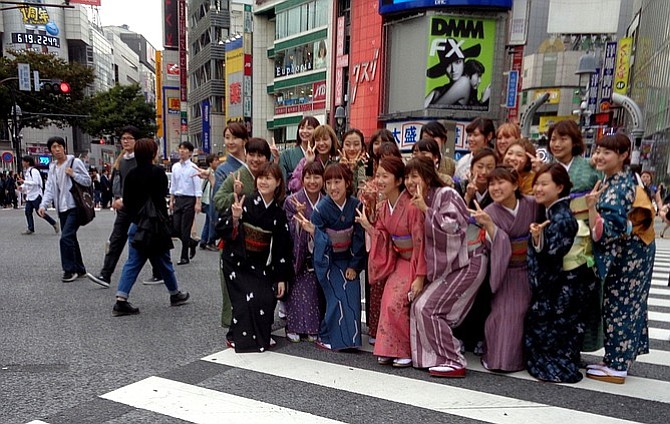 As expected the crowds could be intense at times, but there was a kind of harmonious flow underlying it. The most prominent example of this was at Shibuya Crossing, the famously crowded and chaotic-looking intersection. We could not leave Tokyo without experiencing "the scramble," when all the car traffic lights turn red, and all pedestrians go every which way all at the same time.

It was awesome to me how the sheer masses of people were flowing past one another without colliding, subconsciously reacting to each others' nonverbal signals with split-second speed. We crossed a few times just for fun, and at one point a bunch of young girls in kimonos unexpectedly spun around and posed with the iconic v-sign for a picture right in the middle of it all. People took it all in their stride.

From Shibuya, it was just another few train stops to Shinjuku, where we thought we might find the Godzilla we were seeking. We walked around the area called Kabukicho, which we had heard was Tokyo's seedy red light district. Maybe it's been cleaned up recently, because we found it to be more like a "pink light" district: more tacky, kitschy fun than seedy or menacing. Just when we had given up on Godzilla, lo and behold, there he was peeking out of an upper floor of the Hotel Gracery, which was in turn stacked on top of a movie theater. 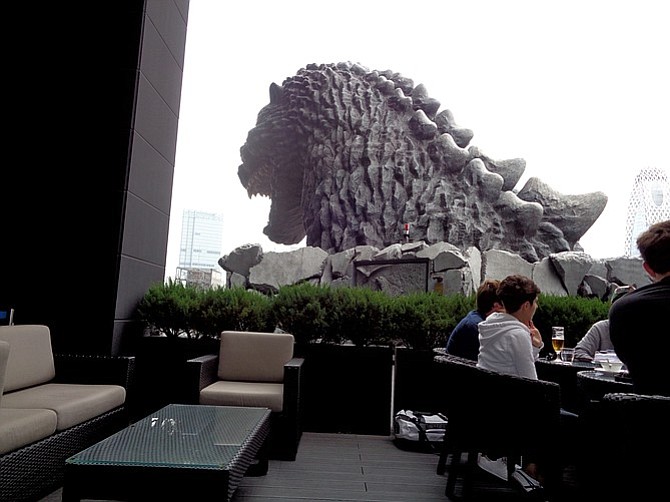 A view of Godzilla from the Hotel Gracery cafe in Shinjuku.

Since we had learned to think vertical, we suspected there must be some kind of cafe where we could get a closer look and rest our tired tourist feet for the price of a beer or pot of tea. The hotel lobby, a cafe and the Godzilla head were all up on the 8th floor.

We were there at just the right time to hear the characteristic roar and see the simulated "radioactive breath." As a cafe patron I went out onto the terrace to see the expansive view of the area and get a selfie that looks like Godzilla is going to eat me. It was silly, but fun!

The bright lights and night life of Tokyo are legendary, and upscale Ginza is one of the many places where it really shines. Although we were exhausted, we headed back out after stopping at the hotel to freshen up after a long day.

Tokyo is very urban, and most of the time it feels like you're walking through valleys between mountains of concrete, steel and glass. Tucked away within this urban fabric are exquisite oases like Yoyogi Park, natural legacies handed down to modern Tokyo from the shoguns and emperors of the past. More subdued than other shrines, the Meiji Shrine is located at the end of a lovely wooded path that made us forget we were still in Tokyo. 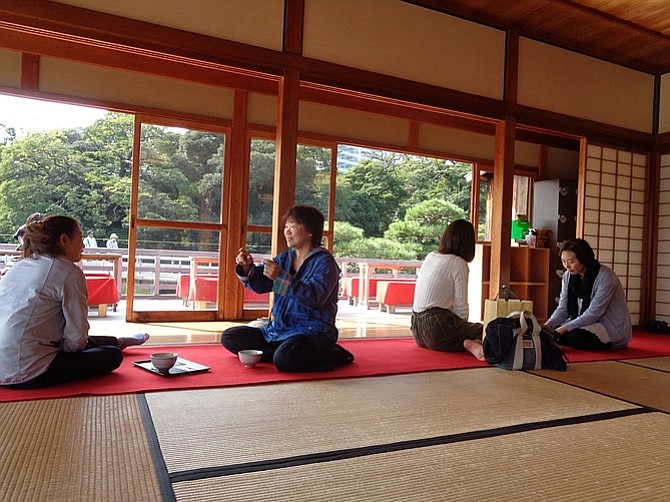 "The Way of Tea" at Nakajima Tea House in Hama-Rikyu Gardens.

Another urban gem is Hama-Rikyu Garden, where it was easy to spend a few hours. On the large tidal pond in the middle of the park sits a lovely tea house that seems to float on water. The classic wooden structure with large open doors was the perfect place to take a bowl of matcha green tea and a red bean wagashi sweet in the traditional style, on tatami, surrounded by a carefully created naturalistic garden setting. Although it's all post-war restoration, I could imagine it was just as nice as that enjoyed by shoguns and their families in centuries past.