Eyesore for the birds at Lake Murray 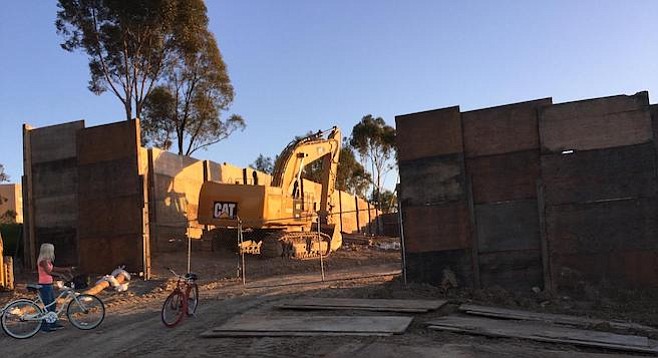 Beginning in late 2016 and continuing through mid 2017, the City of San Diego's water department started the Pipeline 4 Project, which entails relining pipes at Lake Murray.

Along with construction crews, cement trucks, and extra traffic associated with the project came the raising of plywood walls standing 16 feet high and looking like half-built houses.

Craig Balben of the San Diego Water Authority said that some people from the Lake Park Condominiums called to complain about the walls detracting from the lake scenery; they’ve also called to find out their purpose.

The walls contain the two excavated locations where workers are inserting the steel pipe lining and pushing it through to the end: portal number 1, situated directly behind houses on Laport Street; and portal number 2, directly behind a part of the Lake Park Condominiums on Baltimore Drive.

This area for the Pipeline 4 Project covers approximately 5400 feet and runs from the northern part of Lake Murray to the Alvarado Water Treatment Plant. For a Lake Murray visitor, the construction would be visible from the main entrance of Lake Murray on Kiowa Drive going on to the upper trail that runs parallel to the lake's service road until the 1 1/2 mile marker on that service road.

The two portals are surrounded by the "sound walls" or "sound barriers" of plywood according to the workers, mostly from the water department and personnel from Woods Construction. The wood panels are stored in their construction yard and reused for different jobs.

Dave, a foreman with Woods, said that the pipes had not been relined since the 1980s. That particular section of the pipeline had been left untouched for years because the department needed to get untreated water to the plant. According to Tom, another worker for Woods Construction, crews have diverted water to another pipe that will take it to the Alvarado treatment plant.

Gayle Havens, Lake Murray’s reservoir keeper, said that the walls were built for the wildlife and people. Havens mentioned that the lake supports the endangered tricolored blackbird and they are always concerned for the wellbeing of that species. Although the lake itself is not a bird sanctuary, it is home to over 149 species.

Havens said nesting season would be coming soon and the "sound walls" would keep the noise, dust, and debris down.

The walls were also intended to keep people from entering the area but that was not the case a few weeks before Valentine's Day: Dave commented that someone climbed over the walls around portal number 1 and stolen over $30,000 worth of welding equipment. The robber or robbers had crawled inside the pipe to get the equipment.

Havens said the same thing happened five years earlier at another pipeline project near the lake — only the amount stolen was much greater. Security guards are now on duty to guard the equipment.

The Woods Construction crew said that portal number 2 was done on February 17th and those wooden walls behind Lake Park Condominiums would soon be taken down.