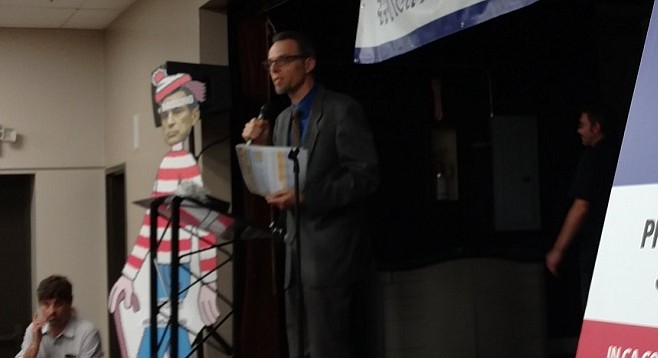 Hundreds of North County residents packed Jim Porter Recreation Center in Vista on Tuesday night (February 21), while a thousand or more were left to gather outside for a town-hall event missing only its guest of honor, congressman Darrell Issa. 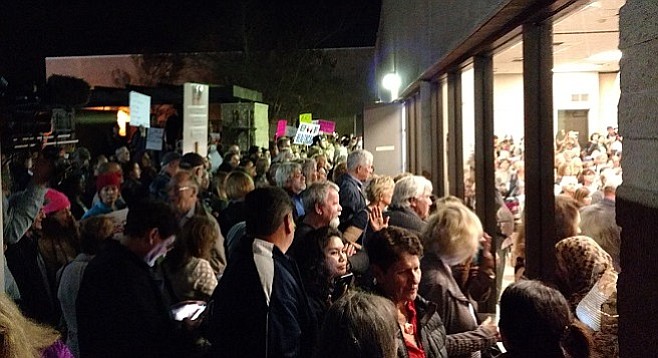 Crowded out of the meeting, many of the protesters gathered at the windows.

The event, organized by a coalition of faith leaders, health-care workers, labor groups, and other activists, failed to draw a commitment to attend from Issa despite a full-page invitation placed in the Union-Tribune. Issa's staff says he had a long-standing invitation on the same date to tour a homeless shelter and was thus unavailable, though other members of Congress have faced open hostility at similar events taking place across the country while legislative bodies are in recess.

The focus of Tuesday's event was to protest Issa and other Republicans' push to repeal the Affordable Care Act (popularly known as Obamacare) without a proposal for how to replace it. Issa, though, has for years endorsed a replacement plan that would involve opening up the plans available to federal employees to the general public. In a February 10 email newsletter to constituents, he announced plans to re-introduce his proposal.

"The [federal insurance plan] has great benefits," said Peter Brownell, research director at the Center on Policy Initiatives, "but the rub here is that for federal employees and their dependents, the government pays 70 percent of their premiums."

Issa released a draft of his latest proposal, which includes language that specifically states "no Government contribution may be made for any individual enrolled in a health benefits plan," effectively ruling out subsidies of the type many enrollees in Obamacare receive.

"That's really a non-starter in terms of a solution," Brownell continued, noting that subsidies in San Diego County alone allowed 260,000 people to obtain coverage through an expansion of MediCal, while another 106,000 receive some form of subsidy through the state's Covered California insurance exchange. 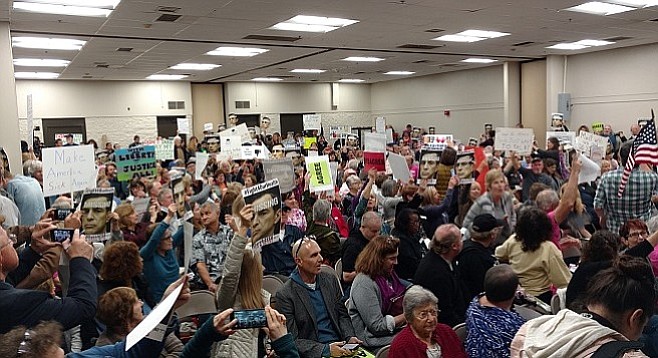 Inside, meanwhile, the crowd seemed no less adamant about getting their point across.

Barbara Cohen, a Carlsbad insurance broker, attacked another portion of Issa's plan — elimination of the relatively unpopular "individual mandate" that requires all Americans, whether receiving a subsidy or not, to purchase health insurance from a private insurer or face a tax penalty.

"Insurance depends on having lots of people pay into it, when they're healthy as well as sick," said Cohen. "If you don't have a mandate, people who are healthy will not sign up until they're sick. And guess what happens to the insurance companies? They lose their shirts and pull out.

"How can he propose a plan with pre-existing coverage and no mandate unless he's planning on it failing?"

Issa, for his part, has said that by including new subscribers into a base of approximately 9 million largely healthy government employees, the risk pool should be sufficient for insurers to remain profitable. 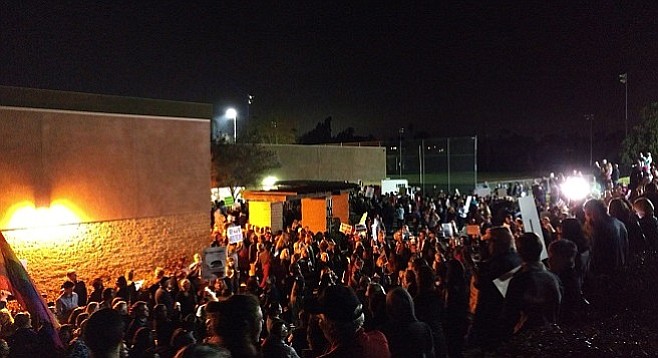 "This is what democracy looks like!" the frustrated villagers chanted outside.

Meanwhile, the considerably larger gathering outside the venue, unable to secure audio of the goings-on inside, maintained a jovial mood, with some crowding around open doors to the auditorium to listen while others lined a grassy hillside chanting "Where is Darrell?" and "This is what democracy looks like!"

Nearly an hour after the town hall's scheduled start time, attendees continued to pour in from the street, all parking near the community center having long since been consumed.

Though he declined to attend the evening event, Issa did meet with a considerably smaller gathering consisting of both supporters and protesters outside his office earlier in the day which, according to a Union-Tribune report was relatively peaceful and did include commentary on his health-care positions. After tweeting photos from that event, critics continued to blast the representative for declining to attend their event.

Darrell Issa is a coward and can't face his constituency. He knows that most of the people in his district don't agree with his position on abolishing the ACA and many of his other views. He was very lucky to win re-election this year, but it's very unlikely he will ever win an election again.

"If you don't have the guts to face your constituents, then you shouldn't be in the United States Congress"