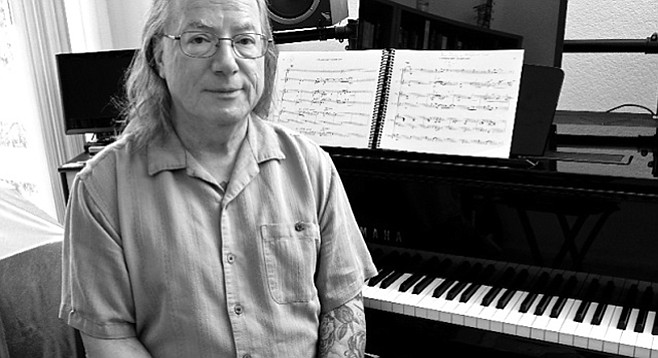 Reclusive jazz composer Joe Garrison is unveiling a new CD called The People Upstairs with his large ensemble Night People. The musician makes his living tuning pianos and long ago he came to this revelation: “I was checking out the unisons, playing really high notes, and I realized the piano is like a spaceship — you can just hit a note and ride it into outer space.”

Joe Garrison and the Night People 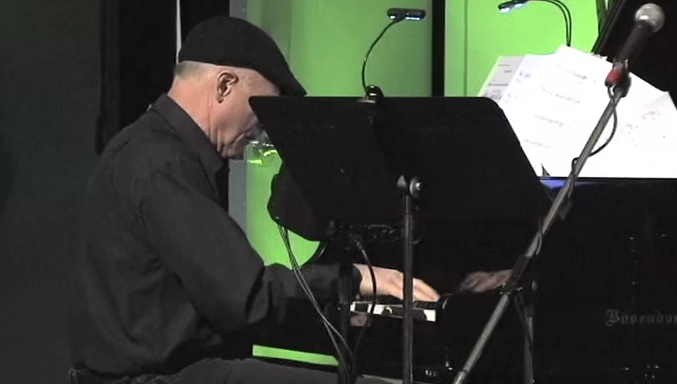 Some tuning situations, however, can quickly turn sour. “I was working for Greene Music and they sent me to this ‘problem guy.’ They delivered a brand-new Yamaha to him that he swore was scratched, so they took it back and brought him one in the crate which they opened in front of him. He starts freaking out that this one is scratched, too, and he’s gonna sue the company. That’s when they call me. I get there and the instrument looks perfect, so I tell the guy to let me tune it and I guarantee he’s gonna be happy. He leaves the house, and I get started, but the first thing I do is drop my hammer on the part that covers the keys! Now there’s a big fucking dent on an instrument he’s already bitching about. I ran back to the shop and we swapped that part for the one on the other piano. It didn’t work, though, and they ended up having to bring a third piano out. I can laugh about it now, but it was pretty horrifying.”

There isn’t much commercial potential in his brand of music, but Garrison keeps at it. “It all goes back to the question, ‘What is life?’” says Garrison. “When my personality comes in contact with that energy in the universe — it manifests itself in music. With an orange tree it makes oranges. I’m trying to renounce music, but it isn’t going well. My duty is to write better music first. You can’t renounce cleaning the floor if the floor is still dirty! Dude, I haven’t figured it out yet, there’s so much I don’t know...”

Until he figures it out, there’re more pianos to service and there’s more music to compose. “I’ve tuned for them all,” says Garrison. “Wynton Marsalis, Esperanza Spalding, Ahmad Jamal... When you can make everything perfect, that’s really satisfying. That only happens when it really matters — when it has to be perfect and stay that way throughout the show. When it’s that good, every note is like a telescope looking into the sky.”

You can download a track from Garrison’s new disc by visiting his website, nightpeoplejazz.com. Night People will perform the album in its entirety on April 8 at Dizzy’s.