Picasso at the Lapin Agile at the Old Globe Theatre

An artist and a physicist walk into a bar... 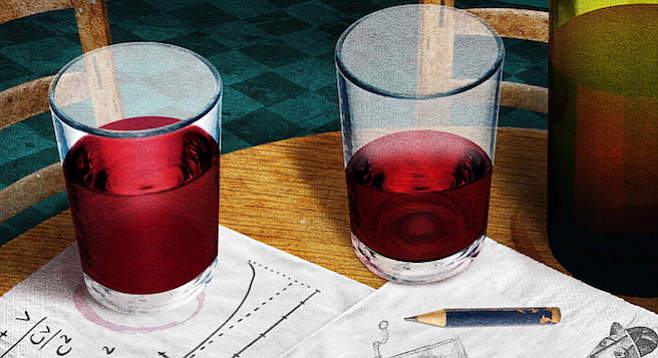 Two geniuses walk into a bar.... Sound like the setup to a joke? It is — and the jokes come fast and loose in Steve Martin’s wacky Picasso at the Lapin Agile at the Old Globe.

Picasso at the Lapin Agile

But for all its joking, this is also a play of ideas. In fact, there isn’t much of a plot here. Legendary comedian, writer, and SNL alum Martin imagines one evening in a Parisian bar in 1904 as the birthplace of ideas that would usher in the 20th Century.

The other genius — besides Pablo Picasso, of course — is Albert Einstein. We meet the two young men when each is on the verge of greatness. Much of the humor stems from what we know of their subsequent accomplishments. Picasso would pioneer Cubism, a revolutionary style of modern art; and Einstein would create the theory of relativity and alter the field of physics.

At first, the artist and the scientist butt heads over who will leave the bigger mark on the 20th Century. Their intellectual dueling, the highlight of the show, becomes a sort of dance. Soon they embrace each other as brothers when they realize they have much in common. Despite differing methodologies, they both seek to explore and reveal the world beyond perceptions.

The bar’s denizens make up a host of secondary characters who opine, to humorous and sometimes absurd effect, on the nature of genius and what the future holds.

Picasso’s art dealer claims that what makes a painting great is the frame — staying within boundaries. After all, he says, who wants to watch a soccer game where the players can run up into the stands with the ball and order a beer?

But our two geniuses — and Martin, too, for that matter — are intent on breaking boundaries. Picasso and Einstein transcend time and space in their thinking, and their genius leaves room for serendipity, spontaneity, and a multiplicity of meanings. Similarly, the play repeatedly breaks the fourth wall and crushes expectations with its own weird randomness: a third genius jumps through time and space to provide the inspiration for Picasso’s groundbreaking Les Demoiselles d’Avignon.

The cast includes several familiar faces from Hollywood, including Justin Long as Einstein, who is as loveably kooky as he is exuberantly scientific. Philippe Bowgen drips sensuality as the lusty, egomaniac Picasso.

A crack technical team makes Picasso look as stunning as one of the works of art discussed in it. John Lee Beatty’s moveable set is a turn-of-the-century Paris daydream, lovingly detailed, and aptly lit by Russell H. Champa. Katherine Roth’s costumes fit the period and are mostly spot-on.

Still, not all of Martin’s gags hit (not in the moment, nor in front of the “icebox”). There are groan-worthy puns, jokes that are too obvious and some that are just plain weird. Other bits drag on like a dull SNL skit. But if a joke doesn’t strike your fancy, just give it a moment. The breezy pace under director Barry Edelstein and the nonstop cracks ensure something’s bound to amuse.

Martin’s humor — weird, over the top, frantic, and at times brilliant — is definitely on display, and if that’s your thing, you’ll love Picasso.