Take your tongue on a side-trip to East Africa

By way of Burundi 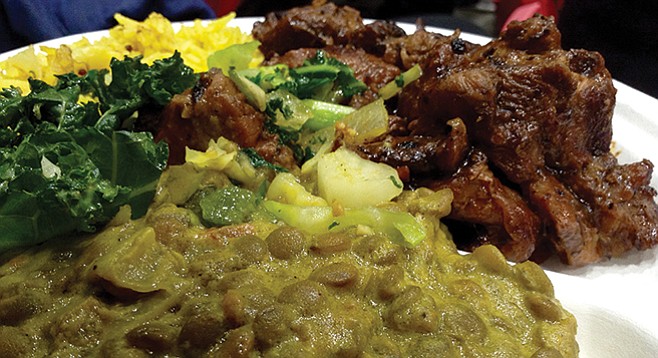 This is Mary Beth and her friend Jef. Waving their arms, pointing their fingers, whooping like werewolves, doing a dance in place here in row 32 at SDSU’s Viejas Arena.

Confession: This is my first basketball game ever. I’m way out of my league trying to keep up with all the tribal hand-waving, victory chants, competing for the cameras for noisiest section in the crowd, pyramid-building cheerleaders, and a live student band playing everything from Star Wars sound effects to Sweet Georgia Brown. It’s wild. And, incredibly, there’s a game going on down there.

But Mary Beth? She’s usually a take-no-prisoners medical teacher here. Now, like everybody else around us, she’s a kid again.

“Traveling! Traveling!” she’s yelling now to the ref about a Wyoming Cowboy. Then she says to me, “If you’re going to get food, go now, before the half-time crowd.”

Sigh. I look up the steps you gotta climb to get to the main doors. Have to be 250 at least. From the top (pant, gasp, sweat), the players look as small as they would on your iPhone. I break out through the doors and — whew! — there in front of the fence is this red-and-black pop-up stall. 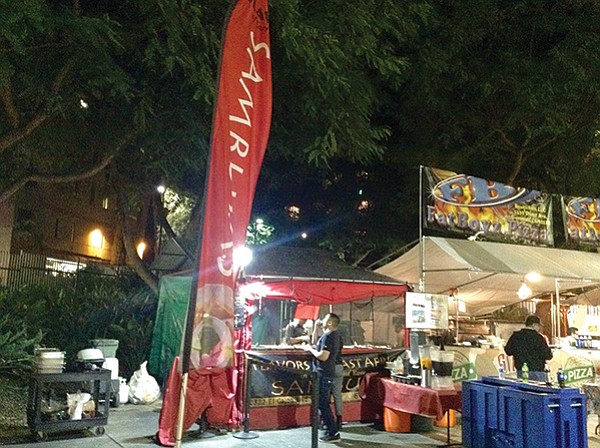 So I join the clump of people hovering over the chafing dishes. Students, teachers, alums with their SDSU sweatshirts.

Hmm... Basically talking stews. All except for slabs of roasted chicken on double skewers. Ooh, so eatable.

Turns out the guy shouting the come-ons is Enrique — Rico. He passes out little pots of dark-sauced chicken.

Oh, yes. Jerk. (Charqui in Spanish, though originally from the Quechua language. Think Peru.) Means dried meat. Also meat that’s been punctured so that spices (like the searing-hot scotch bonnet pepper, often teamed up with jerk chicken) can get inside the meat while it’s cooking.

And, like the flag says, there are always sambusas, the triangular stuffed pastry. A dollar each, six for $5. Six flavors of stuffings: spicy lentils, chicken, spicy beef, spinach, potato, and coconut cream cheese. So, I order one of each, but strictly to take home to Carla. She couldn’t come tonight.

They have $10 chicken bowls and vegan combos for $11 — basically rice and three veggies — but the combo everyone ahead of me’s going for is the $12 chicken combo. You get rice and one veggie plus a choice of jerk chicken (the sweet one), chicken curry, or a chicken skewer. Then they have a $14 combo where you get two veggies, and a $16 where you get two veggies and two kinds of chicken. Or you can get a chunk of chicken for $7. 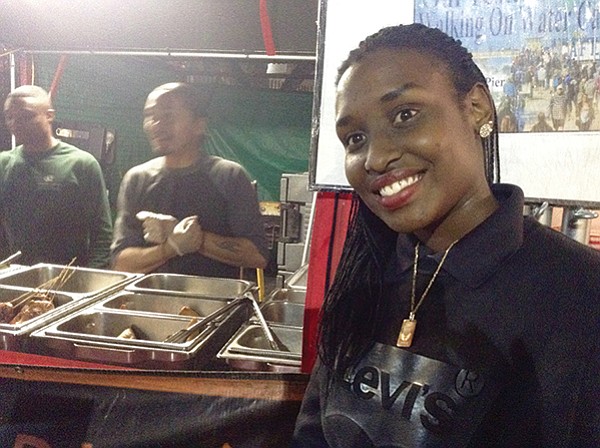 I ask for the $12. Three of them. Mary Beth, Jef, me. And, okay, I let Rico and Darlene (the gal at the cash register) do the choosing of the veggies. One plate’s got rice, collard greens, lentils, and sweet chicken jerk; next has a wicked-looking combo of corn (or hominy?), kidney beans, carrots, and potatoes, along with curried chicken and rice; and the third’s loaded with rice, spicy chicken jerk, and eggplant.

“Our language. I’m from Burundi. Our country is near Tanzania, Kenya, Uganda.”

Oh, man. My dream world. West of Zanzibar, on the shores of Lake Tanganyika, near Shabunda in the Congo. Too romantic for words.

Darlene’s from Bujumbura, the capital. “Weather-wise, it’s just like San Diego,” she says. She’s here studying international law and business. “East African food is a lot like this,” she says. “We love collard greens. But we eat more goat than you, and I do miss our foufou.”

“It’s a kind of corn flour or tapioca mix,” she says. “You use it to scoop up sauces or soup. A bit like rice or bread here.”

I hand over the dingle.

Huh. Murakoze. She is the first Burundian I’ve ever met.

Five minutes later, I’m back inside, in this all-American scene, hanging onto the railing, manhandling this pile of three paper-plate meals, and blind-footing my way down those 250 steps. Steady, steady, I keep saying to myself.

Somehow I make it to our seats, get the plates safely to Mary Beth and Jef. Jef nabs the curried chicken, Mary Beth goes for the spicy chicken jerk. I end up with the sweet chicken jerk. We sit there with our knees tight together so these foldy plates don’t collapse and have at it. It’s worth it. For me, that sweet chicken is just wicked delicious. And along with the yellow rice, there are collard greens and lentils. All tasty and way filling.

Mary Beth gets a big swatch of eggplant and rice with her spicy jerk chicken. Says it’s a bit tingly, but definitely no scotch-bonnet burn in there. Jef has the curry (popular in East Africa, I hear; they have a big Indian population). And he gets the bonus of the hominy/kidney beans/carrots, and potatoes combo side. I get a taste. It’s a great big wonderful yellow-and-red mess.

Aztecs win and suddenly it’s Cinderella time. People who’ve been yelling their lungs out are normal college types again. I collect our plates.

“That was biraryoshe,” I say. 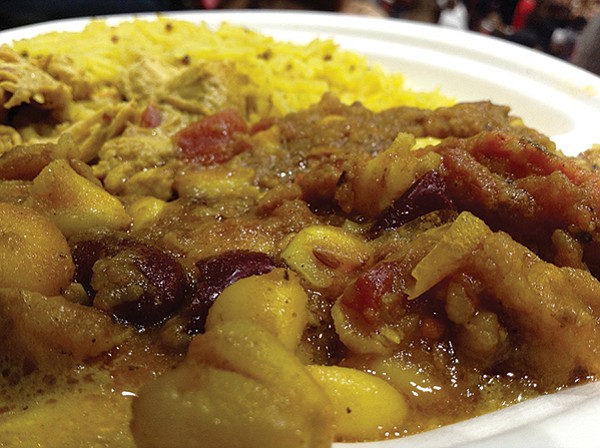 Hominy, kidney beans, carrots, and potatoes are a favorite side dish.