"This is not the last time we'll be here." 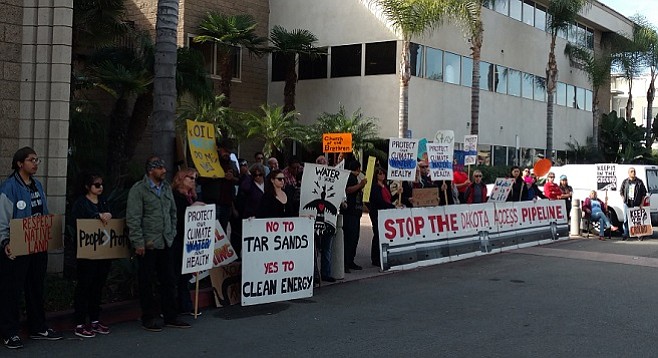 "We knew these attacks were coming, and now more than ever we must grow the resistance," opened Abel Macias, reading a statement from tribal leaders at the Standing Rock Sioux reservation in North Dakota, where protesters are gearing up for what may be a last stand before the way is cleared for completion of the long-controversial Dakota Access Pipeline.

On Monday (February 13) Macias and others spoke to a group of about two dozen in the latest in a round of protests staged outside the Army Corps of Engineers office in Clairemont. The Corps, after promising to complete an environmental review and explore alternative routes for the pipeline, changed course following an executive order from the Trump administration directing the agency to fast-track approval for existing plans.

"This is not the last time we'll be here," Macias promised. "Energy Transfer Partners, the company that's overseeing this project, is emboldened right now. They feel that, with Trump's permission, they can do whatever they want."

The small crowd cheered for, but did not act on the idea of commencing citizen arrests on agency employees for what Macias characterized as a failure to follow federal law by not completing the promised study.

The group was also raising funds for Ivan Sam, who organized a group of about 65 military veterans from the region to travel to the reservation in an attempt to de-escalate conflicts between the self-dubbed "water protectors" and local law enforcement. Sam hopes to take another group back to North Dakota, where dispersed water protectors are expected to begin amassing again in anticipation of a February 22 order to cede pipeline land to Energy Transfer.

"A lot of us can't be in Standing Rock, but we show support and solidarity by coming out and being a bit of an inconvenience at Army Corps buildings to let them know that we demand they respect indigenous peoples' rights and treaties," added Gina Tiger-Madueno, who traveled to the reservation last year.

Later in the day, attorneys for the tribe asked a federal judge to block the pipeline's easement, claiming the corps violated the National Environmental Policy Act by failing to prepare a full environmental impact statement about the river crossing.

"If we have to keep coming out here every few weeks, we'll keep reminding them," continued Tiger-Madueno, echoing Macias. "This fight is not over."