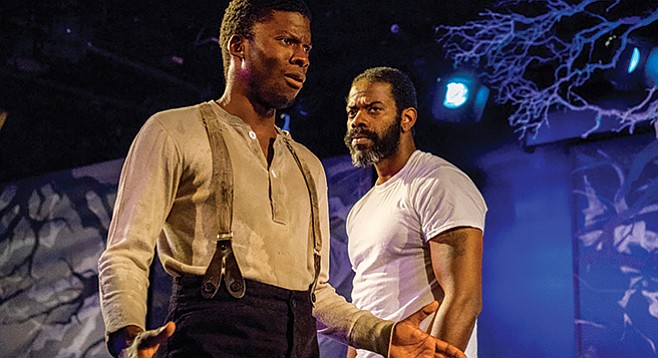 When you enter Moxie’s intimate space, you won’t see a door or the color blue. Instead, five pale gray, diaphanous panels stretch across the stage. Each displays tangles of leafless branches, thorns, and brambles, too thick to squeeze through without tearing cloth or skin. Squint in the half-light and they could become disconnected synapses in a mind severed from itself. Victoria Petrovich’s foreboding set suggests other possibilities. But one thing’s for sure: if those five panels were your poker hand, best to muck it and hope for better cards to come.

Lewis, a math professor at a prestigious university, has attempted just that. An African-American, he has tried to renounce his roots. He married a white woman 25 years ago and earned a PhD in non-Euclidian mathematics. Why? “To rise,” he says with pseudo-nobility, “above the drudgery of existence and apprehend the eternal verities.”

That’s the official reason. And he is obsessed with time not running in a straight line, so past and present can’t connect. Even wrote a book on the subject, Mathematical Structures and the Repudiation of Time.

Is time sequential, connected year to year? Or is each moment brand new, unconnected to what has gone before? In other words, the book asks, “can we define the present moment independent of the past?” Lewis argues for disconnection as a major theoretical issue and as a means to deny his heritage.

The book’s been controversial, at least among white scholars with whom he’s eager to assimilate. But deeper down he yearns to erase the pain of his personal history, which mirrors that of blacks in America from slave days to 1995, when the play is set.

Charles, his alcoholic father, began the process when he “beat the black out of” young Lewis. In a species of abusive love, Charles wanted to spare his favorite son from what the family suffered for generations. Charles didn’t care a whit about Lewis’s younger brother. Rex fully embraced his past and died a homeless crack addict in 1987.

When the play begins, Lewis is alone for the first time in 25 years and hates it. His wife wants a divorce, she says, because he refuses to walk in the Million Man March of October 16, 1995, when black males gathered en masse at the National Mall in DC. She said he wouldn’t go because that would identify him with blacks. She had another reason for the divorce, something to do with “housework.” She’s been pondering that one for the past nine or ten years. “I was thinking,” she says, “I think I would like a divorce” (one of the few weaknesses in Barfield’s often eloquent script: the wife sounds like such a ditz and one wonders why Lewis stayed with her so long).

So Lewis is alone. He can’t retreat into classical music or his usual crawlspace: meditating on complex mathematical formulae. In a format that recalls Dickens’s A Christmas Carol, Lewis suffers insomnia and spends a “ten-year night” with his ancestors’ ghosts. His great-great grandfather, Simon, arrives first, says he’s “just passin’ down stories.” Born a slave in 1844, he learned to read and write (from the man who molested him). Others follow: Simon’s son Jesse, his son — Lewis’s father — Charles, and Rex, spewing flames and summing up the lessons to be learned.

“Identity is not a math problem,” Rex shouts. There is no rational solution. Worse, Lewis sees his family’s past only as a history of oppression. Rex smashes that stereotype: “Oppression is only half the family story!” Lewis has been afraid to honor their suffering and endurance and to find it in himself.

Marilynne Robinson writes, “Sometimes it seems as if one’s own earlier self is a stranger to whom one is also indebted.”

Blue Door and the Moxie production get off to such a strong start, it might be a hard act to follow. Not so. The playwright marbles humor through stories of unthinkable anguish. The 95-minute play’s form echoes Rex’s injunction: find strength and honor amid havoc and weave the two together. The play’s title acknowledges both sides. Lewis’s ancestors painted doors blue to keep evil spirits out and “ya soul family in.”

Vimel Sephus makes Lewis a frozen maelstrom. Lewis is lost. When he looks back, he sees only thorns and bramble, backed by a murky gray sky, and fears getting ripped apart. In effect, Sephus gives us two Lewises: the aggressive one is in profound denial. He will never leave his forged identity, even if he knows it’s inauthentic. The other is more tentative, cautiously edging toward discovery and acceptance. In a remarkable performance, Sephus shifts back and forth and, in almost imperceptible stages, moves toward the suggestion of a breakthrough.

Cortez L. Johnson plays everyone else, from young Rex to ancient Simon, from abusive Charles to the heartbreaking Jesse, who embodies the highest hopes and deepest torments (the program has a useful chronology). It’s a tour de force of swift changes and precise characterizations, and a moving chronicle of oppression and endurance.

Playing through February 26; Thursday at 7 p.m., Friday and Saturday at 8 p.m. Matinee Sunday at 2 p.m. moxietheatre.com