Student-faculty ratio increases explained — "is cause for concern" 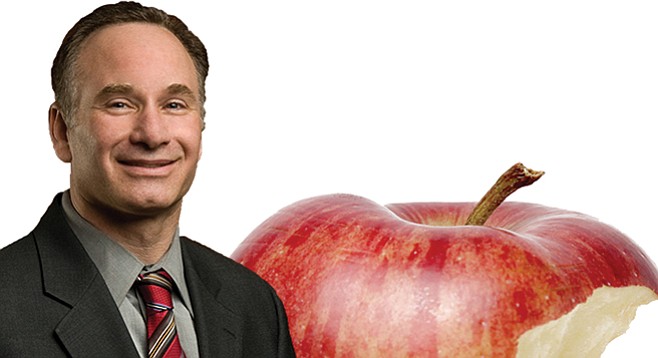 “Numbers of faculty and staff have not recovered from losses during the great recession, whereas numbers of graduate teaching assistants and administrators have increased,” says a report by professor Anne Donadey of SDSU’s Diversity Equity and Outreach Committee. “The loss of 164 faculty members (from 1,871 down to 1,707, an 8.8 percent loss) between Fall 2008 and Fall 2015,” the report notes, “explains the increase in student-faculty ratio, which has been 28:1 since Fall 2013 and was 22:1 in Fall 2009 (and 17:1 in Fall 2001).” The recommended ratio is 18.1, says the Donadey document. “The decrease in faculty numbers is cause for concern, as is the fact that percentages of female and underrepresented faculty members have not increased in spite of retirements and regular hiring since 2014-15.”

On the other hand, the number of high-dollar campus bureaucrats is shooting skyward. “Numbers began increasing to 285 in Fall 2014 and ballooned to 316 in Fall 2015,” per the findings. “Overall, the large spike in administrator numbers in recent years, coupled with the loss of faculty and staff, is cause for concern.”

First, there is a disconnect between the headline and the story. Nowhere in the narrative is there mention of faculty resignations and turnover, as in "fleeing faculty." It would appear that the school is just not filling needs by hiring full-time faculty members. The cause, as identified by the author, is hiring many costly administrators and neglecting to rebuild the faculty, after sharp cutbacks during the economic crisis.

Second, the notion that this nascent "research university" in the CSU system can be planning to reinvent itself while having a scandalously high student-to-faculty ratio is just amazing. Unless I'm very mistaken the operation was bragging of something like a 17:1 ratio in 1970, when it was just a "mere" state college. Oh, but now they can put instructors in front of the classes by using ever-larger numbers of graduate students. This is the same as replacing full-time employees with temps. And those graduate students are only temporary; they are churned and burned rapidly.

Third, I have been continually taken aback by the popularity of SDSU with applicants from across the state, nation and world. The campus is notorious, and has been going back to the 60's, for not havng enough seats in popular classes for all those desiring to attend. For a long time, starting in the 60's and continuing at least into the 90's, business classes were in high demand, and many students spent years enrolled there, waiting for a spot to open up in a needed class. For many, many years the attitude in the admin building was that it was "no problemo", in that if students could not find space in classes they wanted or needed, well, they would take something else! Oh, that was the stated policy when crusty old Tom Day was campus president. Just who was he? Adam Day, mentioned in the story, is his son. How did Adam end up on the board of trustees? I can't say for sure, but money and influence had something to do with it.

All issues with all schools start with the administration. While teachers struggle with class size and state/federal mandates the overpaid bloated administration keeps getting bigger and bigger.

...And now Elliott Hirshman has resigned as of last week, and Matt Potter has nothing to say. When Hirshman leaves SDSU at the end of June for a job as president of a private East Coast ex-Catholic ex-women's college (Stevenson University, formerly Villa Julie College), he will leave behind an unfinished industrial engineering building, a football team nobody gives a crap about, that 200 dollar "success fee", the dumb decision* to name that gargantuan student center after Conrad Prebys a few months before Prebys died, and a new "business college" that is more paper than school. What Hirshman excelled at was finding projects where he could give naming rights to donors, which is why the student center has a "Lee and Frank Goldberg Courtyard", and the Mack family has an elevator foyer in Student Services West named after them (!), and that industrial engineering building (when it is completed) will have a quad named after Thomas Day, but other spaces will be named after donors. It used to be you had to be a professor and dead before they named a building after you at SDSU. The one thing he never did was follow the USD path of Pradeep Khosla and Linda Katehi and double dip by becoming a board member of a corporation. Otherwise, he did everything the college president on the move is supposed to do; he stayed for six years, he tried to be as inoffensive as possible, he encouraged the things that get pay raises.

SDSU alumni should start asking questions of how their alma mater is run, and for whom.

I meant "USC" (Univeristy of Southern California) not "USD"....slip 'o the finger!