How to spot a poser 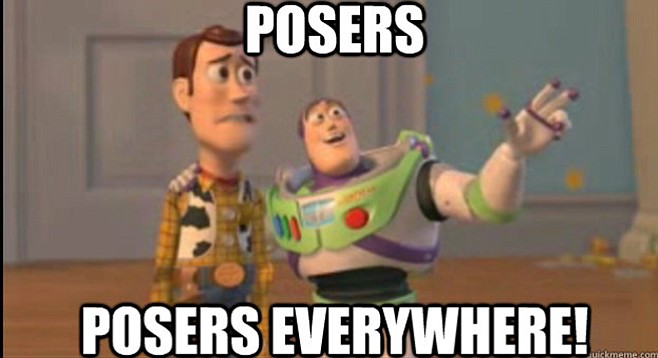 How do you spot a poser?

Oh, damn. Let’s just take a breath here. Slow down a minute before we dive into a long answer for a short question. Talk about opening a can or worms. Or maybe a can of whoop-ass. Maybe a can of some kind of hybrid whooping worms, here to wage a scorched-earth culture war. Calling out posers is serious business. Are you sure you want to get into it? You know people are going to get pissed off, right?

I’ll give you a chance to stop reading now and save your innocence.

Distinguishing posers from the truly legit is among the highest forms of hipster elitism. Only a truly evolved hipster can identify with burning insight who has, and who lacks, credibility.

I’m not 100 percent sure exactly what makes a poser, but, as the justice of the peace said, “I know it when I see it.”

Any guy who’s “too cool” to wear a tie with his suit, so that the collar on his shirt gapes open like that flap of skin everyone has to trim off the edge of a Thanksgiving turkey’s body cavity; that guy is a total poser. Yeah, we get it, you want to show how edgy you are. Guess what, that’s grade-A poser material. Ditch that middle-management job and start baristing for your money if you’re so hard.

Anyone standing in front of a mirror at the gym, taking selfies for Snapchat fame. Sorry. You’re a f*ing poser.

No, poser, you are not #reppindatset when you and your friends from Poway High reunite over appletinis at the local TGI Fridays.

Didn’t watch a single regular-season football game but came to work on February 6 with a boatload of opinions about that overtime drive? Quiet now, little poser, the grownups are talking.

Poser McPoserface has that sweet tattoo sleeve and a fridge full of growlers, but the one thing he doesn’t have is a single original thought inside that vacuous poser mind.

In one sense, “poser” is how members of some in-group label and exclude others who would include themselves in the group but for some perceived lack of integrity. I find this view extremely myopic because it’s unnecessary to actually be included in whatever group in order to perceive a poser. For example, I personally couldn’t give two shits about the Super Bowl, but I have no problem seeing the blatant poserdom of the 1/365 day sports fan.

Also, I don’t think it’s strictly bad to be a poser at least some of the time. The case against posers rests on the assumption that anyone who wants to be anything has two choices. Either, (a) be 100 percent invested and therefore legit, or (b) get labeled a poser for insufficient dedication to whatever.

I mean, heaven forbid a body should dabble. Maybe 99 percent of poser activity harms nobody, benefits somebody, and doesn’t really matter all that much in the grand scheme of things; so why get all up in arms about it in the first place? Let the posers pose. I’m over it.