The legs get stuck in your teeth 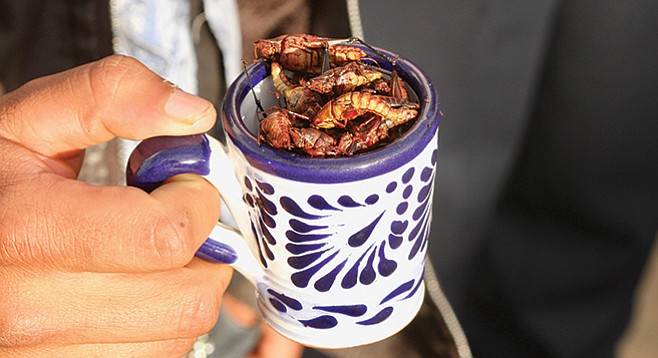 Street salesmen in Tijuana usually try to shove things down your throat, whether you want them or not. They yell at you in English or Chinese, depending on where they think you come from. If you stop for a second or even glance at what they sell, they cajole you to buy something. Some curio shops (that don’t sell liquor) entice tourists with a free tequila shot, then pressure them to buy outdated souvenirs. Even after you say, “No, gracias,” and walk away, they insist. 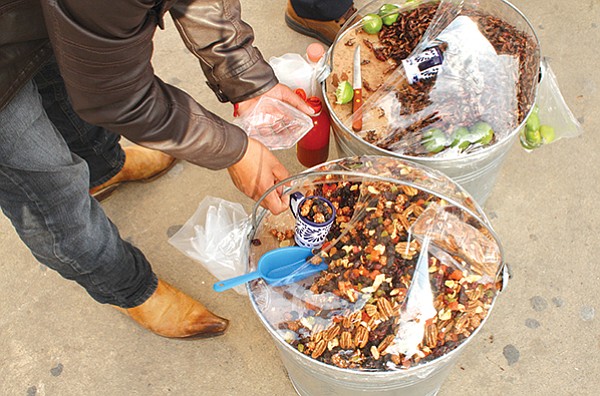 They all sell a kind of Mexican trail mix composed of garapiñados (sweetened nuts), walnuts, dried fruit, and raisins.

Not the chapulines salesmen. Chapulines means “grasshoppers” in Mexico, a word derived from Nahuatl (the Aztec language).

There are around a dozen chapulines salesmen roaming the streets of Tijuana. They carry two large tin buckets filled with toasted grasshoppers. The second bucket sometimes has a mixture of walnuts, assorted sweetened nuts, dried fruit, and raisins. They don’t yell out what they’re selling, like other salesmen. They hardly advertise. Instead, they walk around the street, choose a corner, and stand quietly next to their buckets, waiting for customers to flock toward them.

“Not me, I have nothing to say. There are several of us, you should talk to someone else,” I approached a grasshopper salesman outside Tijuana’s downtown cathedral, but he shut me down when I asked him if I could conduct a short interview and take pictures. 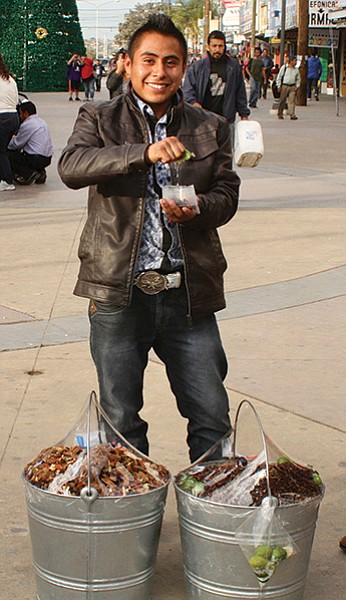 Damian, another chapulines salesman from Veracruz — but he was willing to talk.

“The chapulines are from Oaxaca, I’m from Veracruz. I’ve been in Tijuana doing this for five years. You should come back another day; there are others you can interview.” The salesman stopped me when I asked him if I could know his name.

I tried my luck with another cricket salesman on a different day. It was a gloomy afternoon, and he seemed down on his luck. He didn’t want to be interviewed or photographed. He also said he was from Veracruz but didn’t respond to any other questions.

“What kind of questions? What TV show?” Another cricket salesman I approached also had his doubts. I told him it was for a magazine article, simple questions about the grasshoppers and how he ended up selling grasshoppers on the streets of Tijuana.

“Vamos, mijo! He will make you famous,” an older lady who was buying grasshoppers encouraged the sheepish salesman.

“The people that come from the south, people that know what [chapulines] are, they buy them,” the cricket salesman told me.

His name is Damian, a young fellow sporting a spiffy haircut, brown leather jacket, a white belt with a large silver buckle, clean blue jeans, and pointy cowboy boots. He arrived to Tijuana a month ago. He is also from Veracruz.

“No, los Gringos casi no compran, muy rara vez.” (Americans rarely buy chapulines.) Damian stammers nervously. “I eat them sometimes. I prepare them with lemon juice and Valentina (hot sauce). Sometimes in a tortilla or in quesadillas.”

Asked about the grasshoppers provenance, he answers, “Well, we get them in bulk from Oaxaca.”

Oaxaca is a state located in southwestern Mexico. It’s known for retaining indigenous practices and culture and cuisine. Veracruz shares its western border with Oaxaca and occupies the most Gulf of Mexico coastline than any of the other Mexican states.

Gesturing to the bucket next to the one containing grasshoppers, Damian says, “It has garapiñados (candied peanuts), dried fruit, and other nuts. We also sell them like that in the south.” At 15 pesos (about 75¢) a bag, this Mexican trail mix sells cheaper than the grasshoppers, which go for 35 pesos a bag.

I told Damian that I’d take a bag of each and that if he was cool with it, I would take his picture. Damian nervously scooped the insects with a small clay jug, put them in a plastic bag, and added lemon juice and Valentina hot sauce. He then proceeded to fill up a different bag with trail mix.

I munched on the grasshoppers on my way home. The taste reminds of me of chili-powder-and-salt-covered peanuts, with a different crunch. The legs are bothersome and can get stuck between your teeth in a way similar to popcorn. I couldn’t finish the bag in one sitting, but I snacked on it throughout the day.

This is not my first time eating grasshoppers; I encountered them as a teen in the Oaxaca markets — wicker baskets overflowing with grasshoppers are a common sight. Cricket salesmen like Damian are found in cities all around central and southern Mexico.

If not for the chapulines salesmen, grasshoppers in Tijuana would be a rare sight. Tijuanenses usually purchase chapulines for tourists as a “dare you” snack in the popular bar La Mezcalera. The bar sells a small bag for a dollar.

“We buy them from Mercado Hidalgo, next to La Oaxaqueña,” Ivan Solorzano, manager of the restaurant Tras/Horizonte, told me. The restaurant uses grasshoppers as an ingredient in one of their dishes.

The restaurant La Oaxaqueña sells a small bag of grasshoppers for 15 pesos; 60 pesos for the larger one. Chapulines occupy a tiny space in a glass case that features all types of typical food and spices from Oaxaca.

“You have to go to Oaxaca if you want to know more,” a passerby told me as I was trying to get more information from a clerk in the busy restaurant. “This store next door has them in the back” he said, pointing to the right of the restaurant.

Mercado Hidalgo, next door, sells all types of Mexican foodstuff from the south. In the front of the store there are several kinds of mole, corn husks, and banana leaves for tamales, dried fish, and other delicacies. The shelves inside hold dozens of spices, Mexican candy, traditional toys, cajeta (a syrup made of caramelized goat milk), honey, dried fruits, and chilies, grains, and more. Wicker baskets and plastic balls hang from the ceiling.

The grasshoppers are not displayed as they are in the markets of Oaxaca. Instead, a big plastic bag full of the critters is inside a fridge in the back of the store.

The lady tending the store informed me that the grasshoppers sell for 650 pesos a kilo (around $35 for 2.2 pounds). They ship them from Oaxaca already cooked. She didn’t know much about how they prepare them, but she grabbed a big scoop of them and displayed them for my camera.

The grasshoppers are usually farm-raised in a maize field. They are easy to grab at dawn when they are practically motionless. Workers collect them and put them in plastic bags for them to “empty out.” Then, just like lobsters, grasshoppers are boiled alive. After that they are toasted on a flat cast iron pan (called a comal) with lemon juice, garlic, chili, and salt to taste. They are known to have a high protein value.

I bought a small bag of grasshoppers and a big tub of cajeta for 48 pesos. I threw the grasshoppers inside my bean-and-cheese quesadillas that I cooked later that day for dinner. For dessert I made small cookie sandwiches with cajeta and galletas Marías — a sort of tea cookie. Cajeta is another food that is commonly sold in central Mexico but it is not often seen in Tijuana.

Don’t say the word cajeta casually in Argentina or Uruguay, though: in those countries, cajeta is slang for female private parts.