In fair San Diego, we lay our scene

Shakespeare Academy aims to bring the Bard to underserved communities 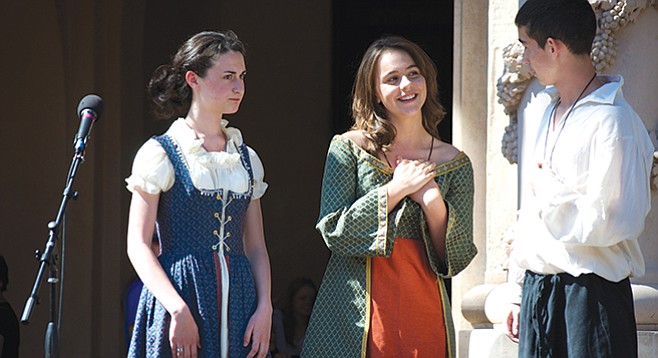 The great weather. The beaches. The Navy and Marines. The zoo and SeaWorld. Bad to mediocre (and exiting) sports teams. Comic-Con. Free associations on San Diego call up these images. But, “Oh me, the gods,” our fair city enjoys a quiet reputation as a Shakespeare town. And ’tis not only the Old Globe and its high-end productions driving this reputation. A cast of Shakespeareans such as Cherie Peacock, founder and director of the Shakespeare Academy and former boardmember of the San Diego Shakespeare Society, is one among many playing parts large and small to make San Diego–upon-Pacific the Bard’s beach town.

“I founded the Shakespeare Academy in 2013 to share my love of Shakespeare with kids,” says Peacock. “I travel all over the county offering classes to home-schoolers and am now looking to start after-school programs. The Academy is unique in that the focus is first on understanding the literature. We also do performance, but the literature is primary. The kids really learn Shakespeare and learn to love Shakespeare. And, it turns out, so do their parents. There’s nothing quite like having the parent of a nine-year-old say that she finally understands Shakespeare after watching her daughter perform it.

“My next goal is to bring Shakespeare to some of our underserved communities, so I am starting the process of becoming a nonprofit to seek funding for that endeavor. I have tremendous respect for schoolteachers, and they are under so much pressure with testing. I think an after-school program could be a great support to their classroom work.”

Eve Kelly: Tell me about the Shakespeare Society’s activities.

Cherie Peacock: “I love the Shakespeare Society and served on their board until I got too busy with the academy. We support one another in ‘Raising the Bard in San Diego,’ the motto of the San Diego Shakespeare Society. Their Open Shakespeare Readings are super fun and very casual. You just show up and a director guides you through one of the plays and assigns parts to anyone who wants to read.” Barnes & Noble Bookstar in Point Loma offers readings on the first Tuesday of each month from 6:45 until 8:30 p.m. March 7th will offer a Merchant of Venice reading.

EK: Any other recurring Shakespeare events about town?

CP: “Shakespeare & Tea is my favorite. Twice a month we read Shakespeare out loud together, stopping for questions and discussion. Scones with cream and jam and tea are donated by the Shakespeare Corner Shoppe. It’s yummy for the tummy — and for the heart and mind.

The La Jolla Riford Library readings are held the first Sunday of each month from 2:00 to 4:00 p.m. The March 5th gathering will be a reading of King Lear.

San Diego Central Library offers open readings on the third Sunday of each month from 2:00 to 4:00 p.m. February 19th will be the continued reading of King Lear.”

EK: You’ve seen Shakespeare performed all over... How does the Old Globe here in San Diego rate in your experience?

CP: “I lived in England for several years and have been to the some of the best Shakespeare festivals in the United States and Canada. So I can be a bit of a snob, and I admit I had low expectations for the Old Globe my first summer in San Diego. Boy, was I wrong. They consistently offer world-class productions. There have only been a couple productions over the last dozen years that I thought were sub-par, and several rank in the top handful I’ve ever seen.” This summer brings King Richard II and Hamlet to The Old Globe.

EK: Is the Globe the only place to see Shakespeare done well in San Diego?

EK: Can you tell me about the annual Student Shakespeare Festival in Balboa Park?

CP: “Yes, it starts with a parade, and there are usually bagpipes or a troupe of drummers leading it. Hundreds of kids from all over the county come to perform ten-minute scenes in front of a panel of judges — and whoever else happens to be at the park. The stages are set up along the Prado pedestrian promenade between the San Diego Museum of Art and the Natural History Museum. It’s a really joyful event, and it’s free for both the performers and the audience.” Most of the schools are local, but troupes have come from as far away as Russia. This year, the festival’s 12th year running, is being held on Saturday, April 29, from noon until 4:00 p.m.”

The San Diego Shakespeare Society will host the Valentine’s Day Sonnets from 2:30 to 3:30 p.m. at the Unconditional Surrender statue (55 Tuna Lane, Embarcadero), south of the U.S.S. Midway. Prizes will be given for the best readings.