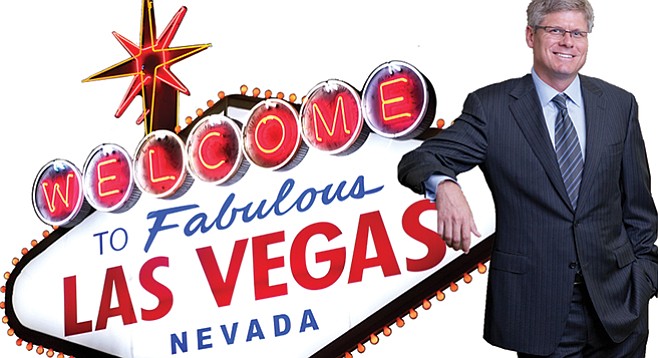 While North County Republican congressman Darrell Issa has been jousting with critics and backers of president Donald Trump who gathered outside his Vista office, a top aide has drawn lighter duty.

For three days beginning January 5, James Tyler Grimm loosened up at the Consumer Technology Association’s annual blowout in Las Vegas. The trade group coughed up Grimm’s round-trip transportation costs from Washington of $933, along with lodging bills of $848.96, a food tab of $219, along with “$57.75 meal taxes, gratuity and surcharges + $150 onsite transportation,” per Grimm’s January 19 disclosure report filed with the Clerk of the House.

“The trip is related to Mr. Issa’s work on the Judiciary Committee, which I handle as his legislative director,” according to the filing. “The purpose of my attendance is to learn about emerging technology issues.” Grimm, who was booked into the posh Encore at Wynn hotel on the Vegas strip, had access to such attractions as the keynote speech by Qualcomm CEO Steven Mollenkopff, and a presentation entitled “Virtual and Augmented: Our New Reality.”

Entertainment offerings included the C Space Party at the Jewel nightclub on Friday, January 6. “Come celebrate and have fun with other influencers in media, marketing and entertainment at one of Vegas’ hottest nightclubs. JEWEL is a multifaceted venue with a luxurious, modern experience and world-class DJs and performers.” The Upload Party was the same night at the Palms Casino. “To kick off 2017, we’ve rented out the top 2 floors of The Palms (twice as big as last year), with stunning panoramic views of Las Vegas.”