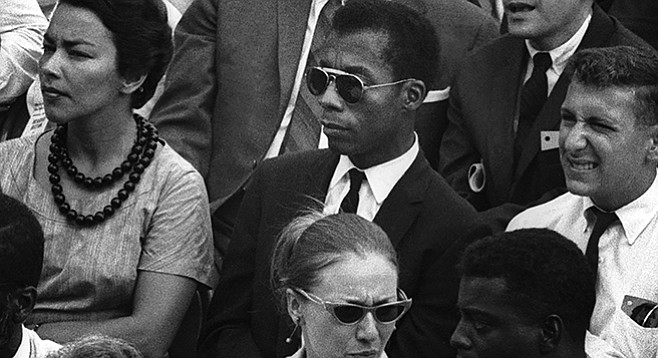 I was sorry when my interview with I Am Not Your Negro director Raoul Peck was cancelled at the last minute, in part because I wanted to ask him — out of genuine curiosity as opposed to unsubtle criticism — why he chose the source material he did. African-American author James Baldwin produced a sizable amount of finished work on the questions of race and class in America, including the famous essay collection The Fire Next Time. But Peck went with something unpublished and unfinished, and it shows.

The documentary, which opens at Landmark Hillcrest on February 10 but plays at MOPA this Saturday at 7 p.m. as part of the Human Rights Watch Film Festival 2017, opens with the following text: “In June of 1979, acclaimed author James Baldwin commits to a complex endeavor: tell his story of America through the lives of three of his murdered friends: Medgar Evars, Malcolm X, Martin Luther King, Jr.” The book was to be entitled Remember this House. By the time Baldwin died in 1987, he had written 30 pages of notes for the project.

I Am Not Your Negro trailer 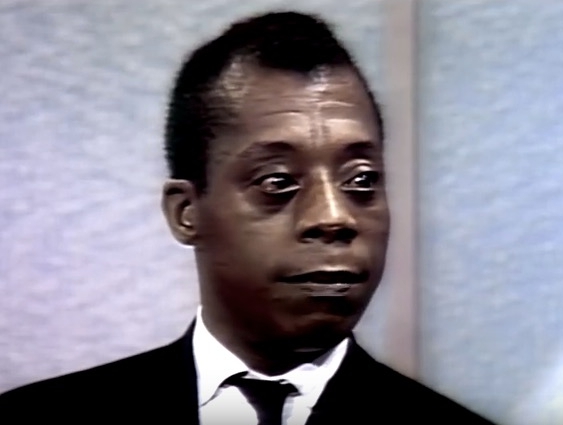 These notes provide the film’s narration-of-a-sort, read masterfully and mutedly by Samuel L. Jackson. But they are very clearly notes, impressions, the scattered insights and recollections of a man who is just getting started. Some are naturally stronger than others; presumably, the weak ones would not have survived the first draft. It’s telling to compare Jackson’s read ruminations with the clips of Baldwin in the public eye: sitting next to Dick Cavett in a television studio, or standing before a crowded Oxford University gallery, he is polished and composed even when incendiary. Considering the Black Panther movement in light of America’s natal fondness for revolutionaries, he observes, “If we were white — if we were Irish, Jews, Poles — Nat Turner would be a hero. If a white man stands up and says, ‘Give me liberty or give me death,’ the whole world applauds. If a black man says the same thing — the same words — he is treated as a criminal.” A bold, broad, claim, perhaps debatable but not easily dismissible. Nothing like the clumsy generalization from his notes that “No American has any viable, organic connection between his public stance and his private life,” or the tantalizingly unexplained assertion that Dr. King with his gospel of nonviolent resistance and Malcolm X with his talk of “by any means necessary” held, in the end, “virtually the same position” with regard to the struggle against racism.

I Am Not Your Negro is not the film version of Remember this House — not as it is described in that opening, anyway. For one thing, Evars, X, and King occupy far too little of the film’s running time. Their lives, their thought, their work on behalf of blacks in America, and their murders receive less attention than Baldwin’s memories of their appearance, or their first meetings, or the circumstances — on a beach in Puerto Rico, or at a fancy restaurant, or by a Hollywood pool — in which he heard of their deaths. This is nothing against Baldwin, because again, these are notes. It’s natural to start with those kinds of concrete, immediate details. But here, they have the effect of placing Baldwin at a remove from the horror. Ditto his listing of the celebrities near him at King’s funeral, juxtaposed with a powerful memory of trying to maintain composure, in part out of fear that “if I began to cry, I would not be able to stop.”

Much more attention is given to Baldwin’s story of America through his experience of American film. But here, again, the gulf between Baldwin’s notes and his finished work is wide, and widened further by Peck’s direction. There’s something undeniably powerful in Baldwin’s filmed description of himself as a boy, realizing that in your beloved Cowboys vs. Indians movies, “the Indians were you,” and also his youthful inability to see anything recognizable in on-screen blacks, except for the terror in the face of a black janitor as he is questioned about the rape and murder of a white woman found in his workplace. The accompanying clips help to illustrate his experience. But when he makes notes about Doris Day and Gary Cooper as “grotesque appeals to innocence” and the film places the sound of Day’s lovestruck crooning over an image of a lynched corpse, it’s hard to see it as anything but cheap. Yes, horror abounds. But so does romantic love. Baldwin notes that someone once told him that people cannot bear much reality. Hence, Cooper and Day. One might reply that he went to the movies, too.

It seems that Peck chose to work with Baldwin’s inchoate work because it gave him room to move. Baldwin spent most of his adult life in France and died in 1987. Peck wants to bring him back to America, and into the present. He wants to place Baldwin’s claim that “the story of the Negro in America is the story of America, and it is not a pretty story,” that “the country does not know what to do with its black population,” and that “the American people are unable to face the fact that I am bone of their bone and flesh of their flesh” against news clips from Ferguson in the wake of Michael Brown’s shooting, against video of Rodney King being beaten by police, against still shots of modern American blacks looking unsmilingly into the camera. I’ll go further and suggest that he also wants the present-day viewer to share in Baldwin’s admission that he finds himself compelled to be an optimist in spite of everything. And he wants, ultimately, to find a way to include Baldwin’s famous dictum that “Not everything that is faced can be changed; but nothing can be changed until it is faced.” Remember this House was an unfinished work; so too, observes Peck, is America’s struggle with race.