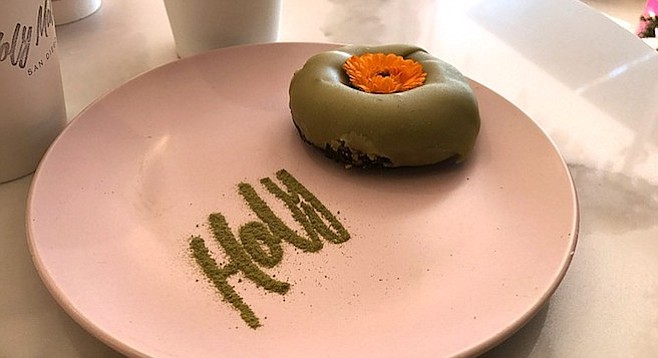 Holy Matcha, a tiny cafe specializing in the powdered green tea for which it’s named, feels like it was designed by an Instagram algorithm.

The interior is all pink and green, and everything — down to the food and drink — matches this color scheme. A pink neon sign (“you, me, matcha”) is positioned against a wall at selfie level. The food menu is limited to almond or avocado toast; vegan, gluten-free waffles; and gluten-free donuts.

Though these offerings are disjointed, the presentation is picture-perfect, and the branding is on point: each plate and beverage comes with a reminder of the location, beautifully stenciled in matcha. Which means every single picture posted instantly becomes an advertisement. In fact, that’s why I went there. All those pictures were so beautiful, and the name of the place had been burned into my retinas by sheer repetition. My 14-year-old niece had even showed me her photos, and those of her friends, including a shot of them with the neon sign. From the sweetly feminine decor and pretty dishes to the allure of healthy/lavish lifestyle-signaling, it screams Insta-cool. 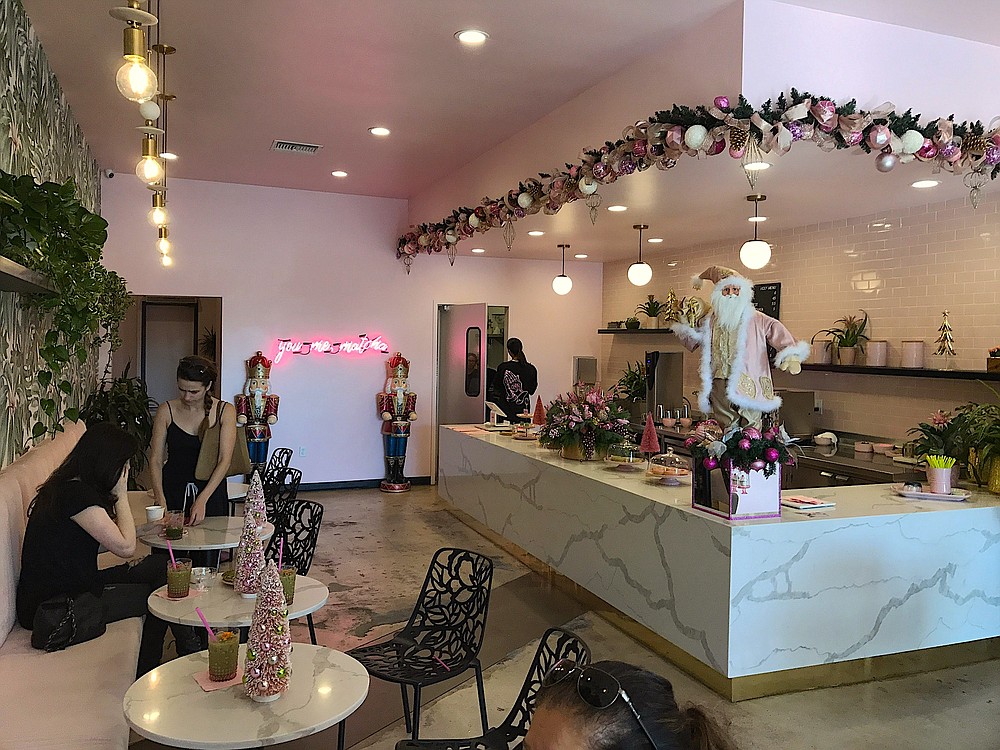 The pink-and-green glow of Holy Matcha, complete with a selfie-level neon sign

All of the drinks are matcha-based, and a Matcha Latte (with almond or coconut milk, as Holy Matcha is dairy-free) is $5.50. I ordered a Hazelnut Matcha Latte for $6, which tasted a lot like the Matcha Lattes I grew addicted to at a Starbucks in Tokyo, though slightly less rich for the lack of dairy. I didn’t detect the hazelnut flavor, but it was light and lightly sweet and the grassy, slightly bitter flavor of matcha was prevalent. 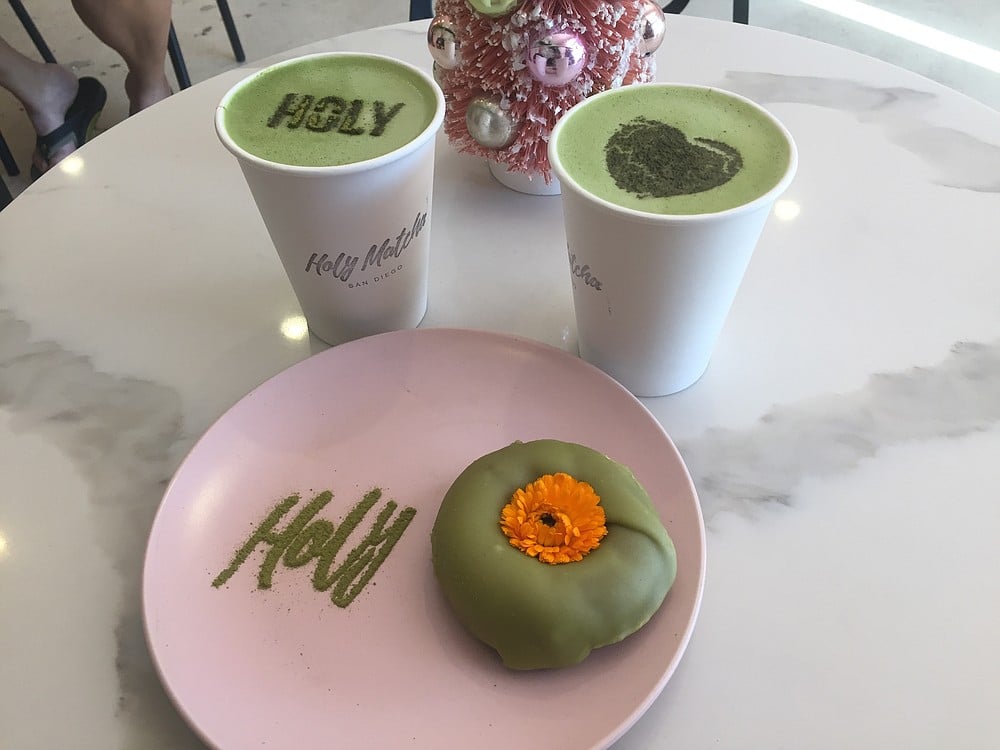 The Avocado Toast ($7) was the highlight of our afternoon. This is something my husband David makes often at home, so I was skeptical that Holy Matcha's version could be much better. The bread (with gluten) was exactly the right thickness and texture, but the true delight was in the slicing of the avocado — instead of mushed with a fork as we so often see it, this avocado was thinly sliced and fanned out to ensure full coverage over the toast. The seasoning — salt, pepper, chile flakes, and I’m sure I detected a subtle citrus note — was perfect. David said he's going to start experimenting with this style at home. 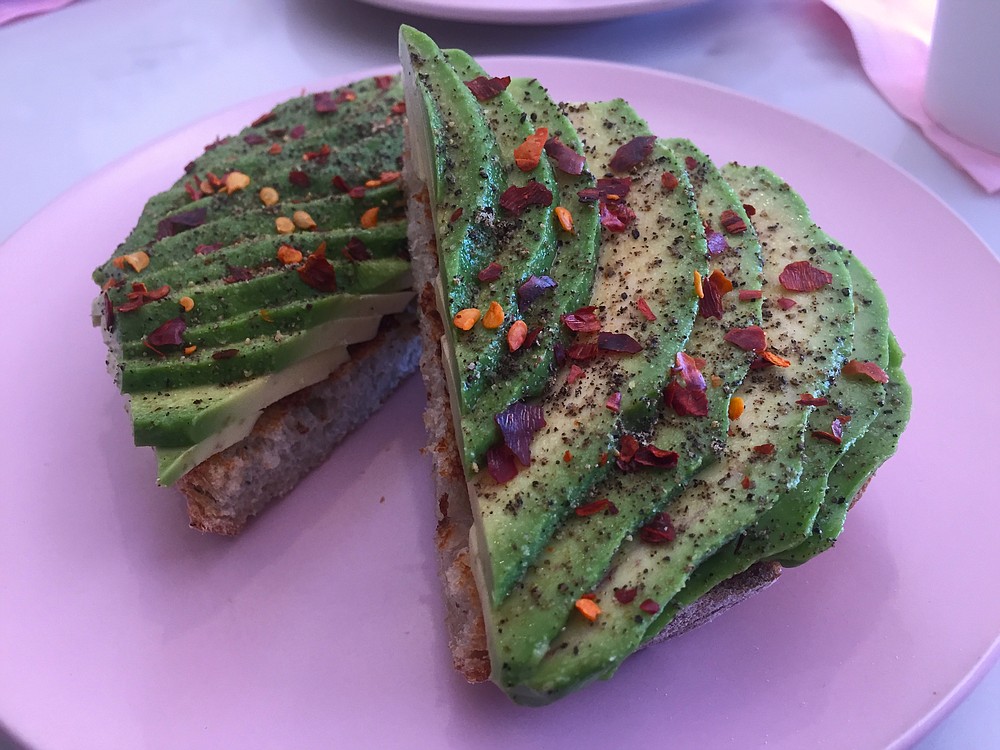 After the toast came the disappointments. I should have known better than to order a gluten-free donut, as chemistry ensures there’s just no way it could be reminiscent of the crispy, puffy, chewy dough of the real thing. Sure enough, my first bite of the chocolate “donut” with matcha frosting was sickeningly sweet, more pasty than pastry. I took one bite and threw the rest in the trash. Lesson learned, next time I’m in the mood for a donut, I need to walk next door to Nomad. 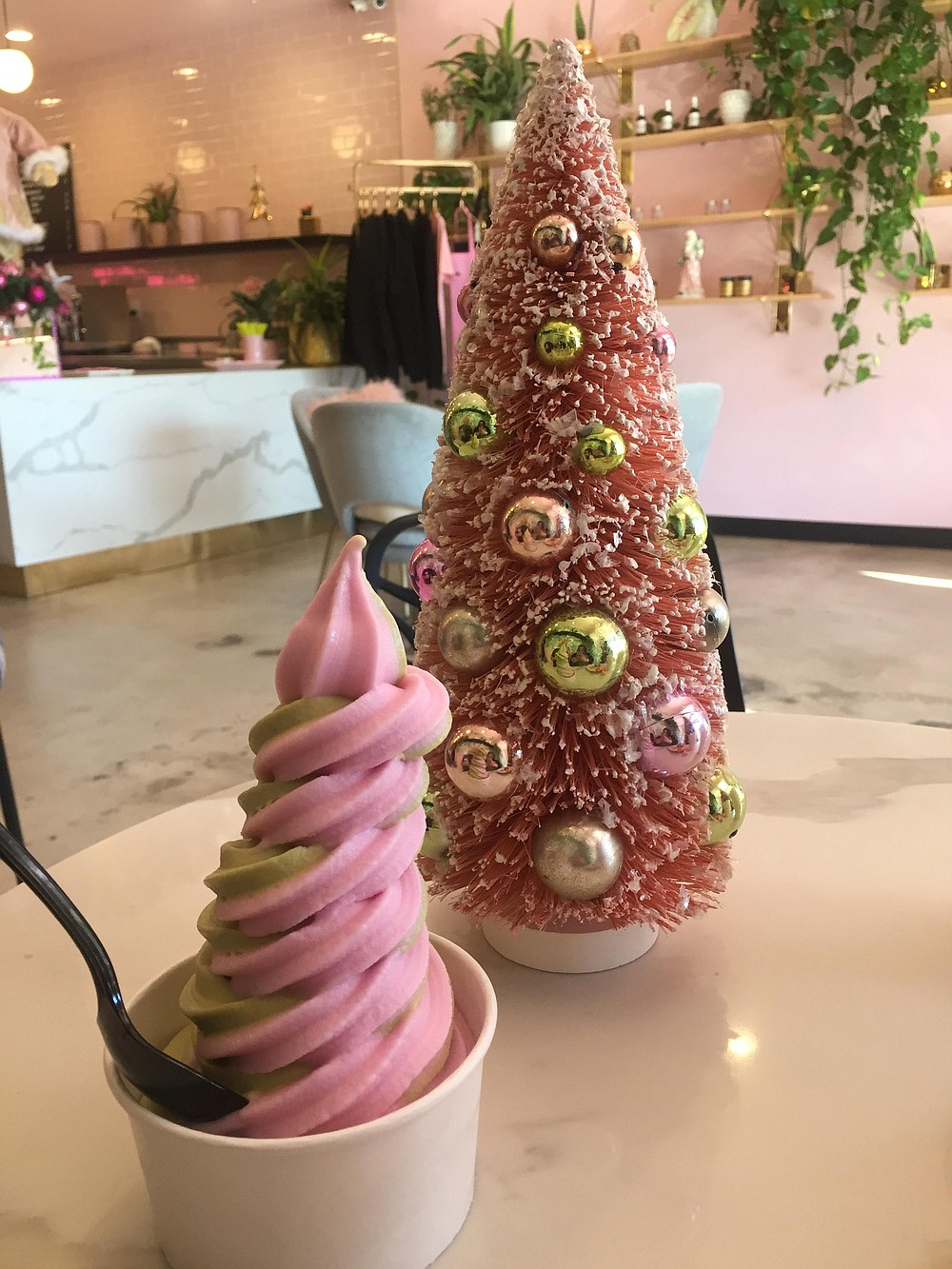 David’s disappointment came in the form of his strawberry-and-matcha-flavored soft-serve ice “cream.” I found it light and refreshing, reminiscent of but not quite as rich as a gelato. But David found it watery and said, “It’s like the difference between chocolate milk and Swiss Miss.”

Strangely, Holy Matcha does not accept cash. Then again, What kind of ancient loser actually carries cash in this century? is what I imagine my niece and her friends would comment in response to a complaint about a restaurant that does not accept cash. A complaint that was probably posted on Instagram, along with a picture of a pretty pink donut.