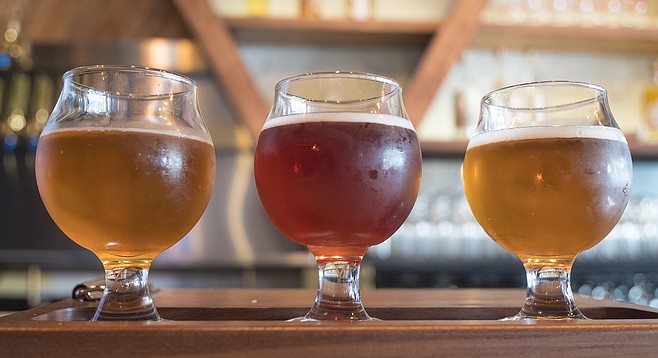 1. San Diego beer's unchecked growth Thirty-two new breweries started operating in San Diego in 2017, the most yet in a single year. Twenty-two of them were new enterprises, and two others returned from hiatus. One, South-Norte Beer Co., shares a brewing location with Coronado Brewing. Three specialize in producing aged ales, and two of them have yet to publicly release beer.

The net growth was 25 brewhouses, and WestCoaster magazine reports the active brewery count at 156.

2. The rise of booze Even as craft beer's reach in San Diego continued to expand in 2017, 17 new local wineries brought the total number to 133. Alternative alcohol producers also entered the market at an unprecedented clip, with mead and cider producers leading the way, occasionally within the same tasting room. With Twisted Horn and Raging counted twice for making both brews, the number of cider producers doubled, to ten; while five new mead producers raised the total to eight. San Diego also boasts two sake producers and a fruit-wine specialist.

Meanwhile, craft spirits made gains of its own, though it's tougher to get an accurate count. While at least five new distilleries went online countywide, bringing the total to 15, several more businesses contract-produced liquor on someone else's still.

3. The domination of aluminum The 22-ounce bombers and growlers that dominated for more than two decades in craft-beer retail packaging started to look out of sync with beer trends in 2017. Cans and crowlers took over both bottle shops and tasting rooms, with many offering 16-ounce four-packs rather than the more conventional 12-ounce six-packs.

In the process, mobile canning operations have become a growing offshoot of the beer business, afford small breweries a chance to release canned beer without having to invest in prohibitively expensive canning machinery. More affordable crowler machines make it feasible for small breweries to sell 32-ounce cans on demand.

4. Beer's battle for independence The opening of a Budweiser-owned 10 Barrel brewpub in East Village was not well received by San Diego's local beer faithful. While a crowdfunding campaign succeeded in physically trolling 10 Barrel's opening party with an airplane banner, most of the back-and-forth arguing difference in value between locally produced and locally owned beer played out on social media.

Ultimately, advocates of small beer businesses sought a marketing solution. Both the San Diego Brewers Guild and national Brewers Association offered their members official logos to distinguish their businesses and products from corporate-owned subsidiaries of the companies behind Budweiser, Miller, Coors, and Corona.

The Brewers Association released an upside-down beer-bottle seal distinguishing independently owned brewery packaging as such. As of mid-December, the trade association reports 2700 breweries in the U.S. have adopted the new seal; that's 45 percent of the estimated 6000 breweries nationwide but reportedly represents 75 percent of the volume produced by craft brewers.