"The first part is our hotline, where we have someone available 24/7." 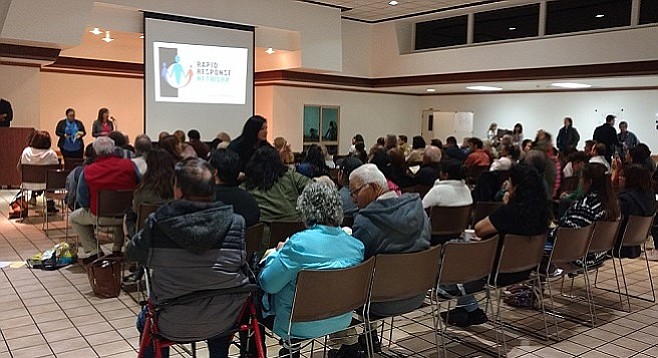 After nearly ten months in the planning stages and contributions from more than 40 faith and community groups, Tuesday (December 19) saw the launch of the San Diego Rapid Response Network, a system designed to fight deportations and immigration enforcement techniques including checkpoints and mass raids.

"We've formed a three-part system," explained Alor Calderon of the Employee Rights Center, one of the groups working on the network. "The first part is our hotline, where we have someone available 24/7 for people who fear they might be facing detention issues — they may be experiencing a raid at work or they may be victims of a crime. You can report any enforcement action in progress, but obviously a lot of the people we talk to will have already been detained or have a family member who is.

"Our trained operators play a big role: they can inform you as to your rights, guide people on how they can respond to different questions they might receive. But let's say you're calling us after a contact — from working with partners who have done this [similar groups already exist in Los Angeles and San Francisco] we anticipate that will be many of the calls — the next step in our process is a legal assessment to address your immigration options."

Calderon said that in addition to providing immediate advice over the phone, a text-messaging network will ping any volunteers within close proximity of the call to verify reports of immigration raids and debunk hoaxes. While the system isn't currently capable of broadcasting alerts network-wide to advise volunteers where to show up or the undocumented where to avoid, these capabilities are being pursued for the future.

"We're still working on setting up alerts to go out to the community. There's been a lot of discussion about this, but our technology doesn't allow us to deploy it just yet."

The next steps in the network's process include contacting those who've been detained and their families with both legal and logistical support.

"You may have a remedy in immigration court," Calderon continued. "This could include a temporary parole, but more importantly we look at a way in which you might legally stay in the country. Some people don't know, but if your grandparent was a citizen, that can be passed on to you. You may be eligible for asylum based on what's going on in your home country — there are a few other obscure things in the law that might be helpful to some people.

"There's also the issue of accompanying the remaining family — perhaps you've lost a father, a mother, a child. Depending on the role of the detained person, a family may need help during this transition to figure out how to move forward, especially if that person is removed and they don't have this family member here anymore. Or the person detained may have medical needs not being addressed that require help in obtaining treatment."

Roughly 150 volunteers have been trained to work on the system, which is about the same number of people who on Tuesday night packed St. Jude's Shrine of the West in Southcrest (off Boston Avenue, just west of 38th Street) for the official launch. However, only a dozen or so were identified as already being active participants. The rest of the group was mobilized to begin community outreach, going door-to-door and posting flyers and information cards around neighborhoods with dense Hispanic populations advertising the service.

Asked whether immigration officials have contacted the organization or expressed concern over what could be seen as an attempt to thwart their efforts, Calderon says no.

"We haven't been doing this in secret; there's been zero lack of transparency about what we're working on here. But so far there's been no contact from [immigration services]."

This should be interesting. Let the red herrings fly and the employers wonder where their illegals are.