Bah, humbug! Seriously. Just once, I wanna be rich at Christmas. Be able to splurge, party, take folks out, presents for everybody, not sweat the lettuce. Already, the holiday thing’s starting to strain wallet, patience, REM time.

I have a little of the green stuff in the pocket as of right now. Think I’ll grab a bite of something before heading back to the ranch. 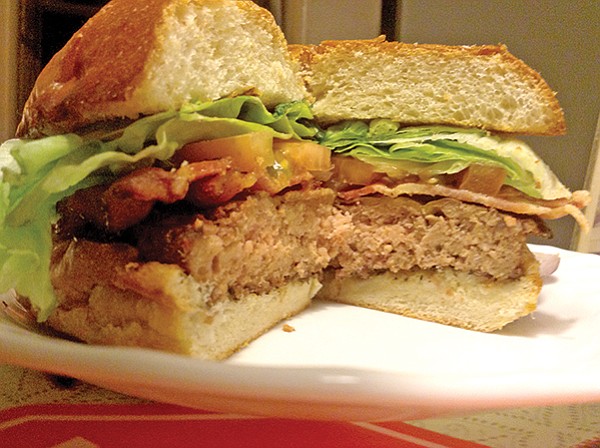 It’s dark, but only six o’clock. The good news? Dobson’s Bar & Restaurant, right here on Second and Broadway, has its happy hour till 7 p.m.

Good memories at Dobson’s. I sometimes drop in here for a Friday HH beer. Five bucks’ll get you a cerveza and the free bonus of sitting among this town’s noisy power elite, politicians, government bureaucrats, downtown lawyers, all letting go after a week’s tensions. This is where I first heard that Groucho Marx joke: “These are my principles! And if you don’t like them — I have others.” 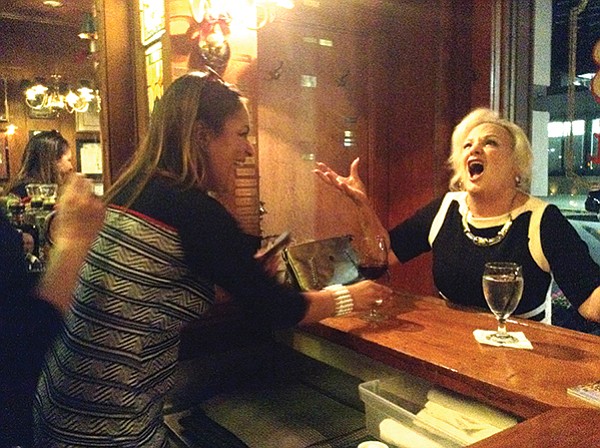 Medina and Jackie show this bar is all about talk... and sometimes even opera.

I’d also watch so many of them order up a mussel bisque en croûte, a bowl of seafood capped by a luscious-looking golden crust. And every time the very proper waiter, Antonio, brought it to the customer, he would take a spoon, bust a hole in the crust, and pour a long squirt of Spanish sherry into it. Watching those pols haul the mussels out of the creamy, winey, orange bisque and into their mouths had me drooling like Tiny Tim in A Christmas Carol. 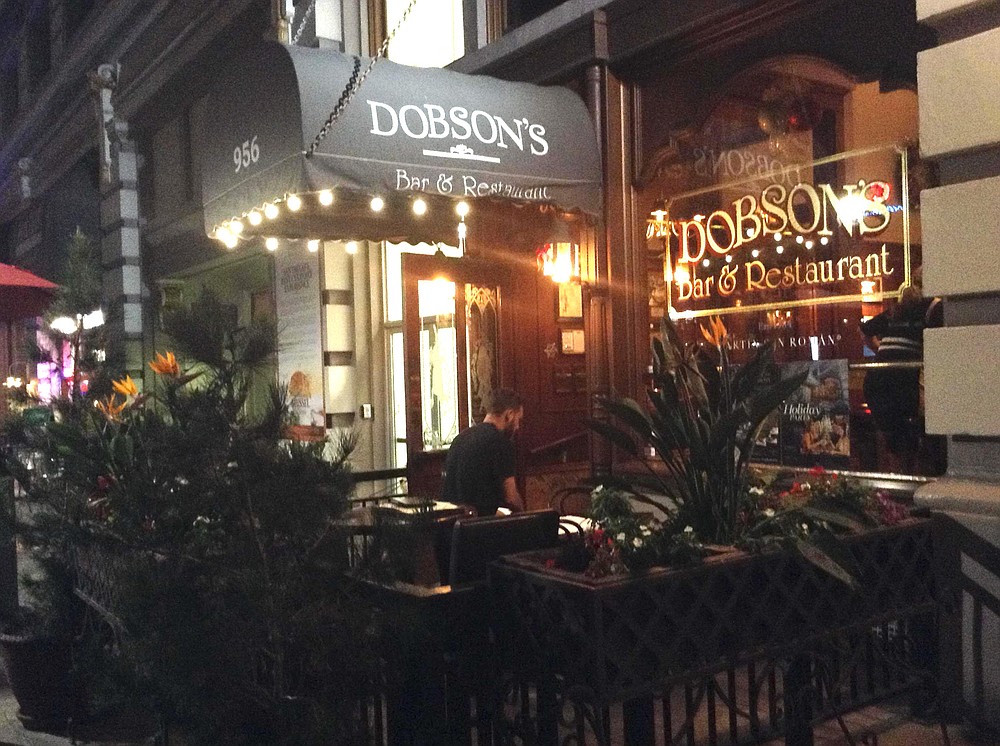 Dobson's, where the guy sitting next to you could be the mayor.

Whatever, it’s plush in here. Pretty much as when it first opened in — get this — 1912, as a “Theater Buffet and Bar” for the new Spreckels Theater. We’re talking lots of brasswork, plus tiger oak and mahogany everywhere, all brought “around the Horn,” as the menu blurb says. 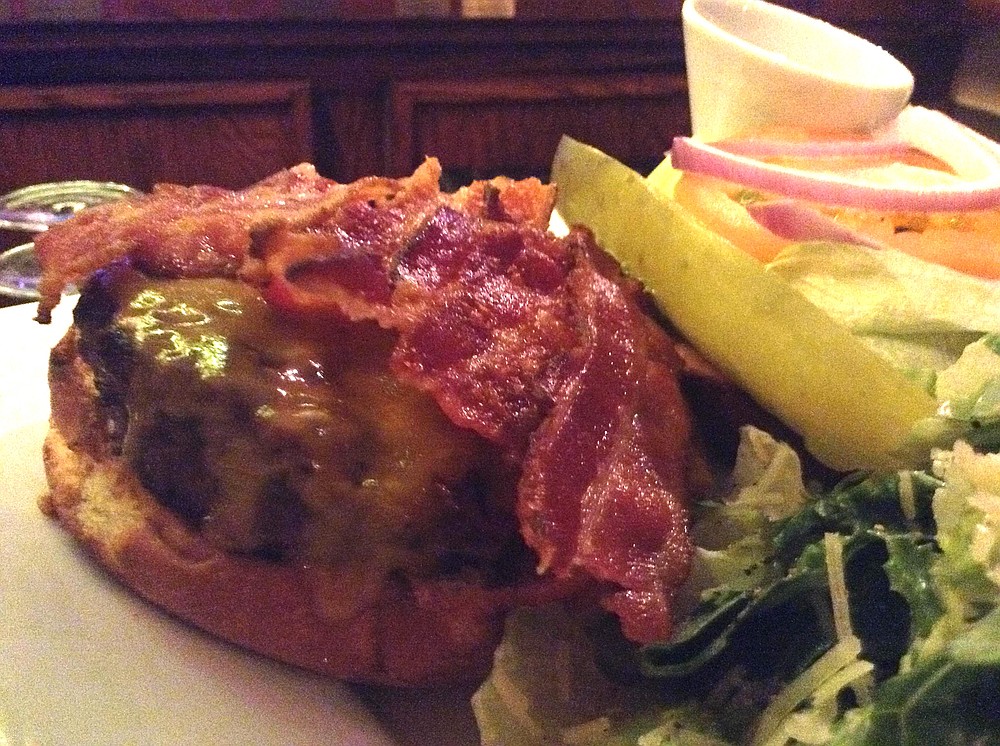 That has to be a half pound of Angus, hiding beneath that bacon.

I haul myself up on a bar stool. On my left, an imposing gent nurses a beer. On my right a svelte blonde lady in a black-and-white dress plays with a glass of red wine (“It’s a Merlot”).

The one thing it takes an age to realize: there’re no TVs and only faint bossa nova music playing.

“This is a talking bar,” says the lady, Jackie. “Remember conversation?”

Then, from behind a giant samovar, a lady barkeep appears with menus. Name’s Shannon. “Something to drink or eat?”

“Do you still have that mussel bisque with the pastry on top?” I ask.

“Absolutely,” she says. “In happy hour it goes for $8. I can get it going for you right now while you decide on a drink.”

Wow. Eight bucks is definitely not bad. But after she heads off, I check the happy-hour menu, see what I missed.

Ah. They have a “Dobson’s Bar Room Burger” for 10 bucks. Down from $14. It comes with “sharp cheddar, maple bacon, French fries.”

One of the cooks, José, turns up with my mussel bisque. Oh, my. Hot, flaky, golden pastry crust roils over the lip of the cup. And now, here’s Shannon with a spoon and a large bottle of sherry with a pourer. “It’s Spanish,” she promises.

“So I’m not the first customer to have one of these?” I ask. ’Course I know the answer.

“More than a million before you over the last 33 years. Something to drink?”

Working tonight, so I order an O’Doul’s ($5). Sigh. A nice $5 house Chard would go so well with this. I start fishing through the pastry for mussels. There are plenty. And man, the orange purée they swim in is creamy, winey nectar.

“Well, New Zealand mussels, and the purée’s lobster, cream, white wine, and we dip it all with shells from the mussels. That adds a salty flavor,” he says. “Then the Spanish sherry wine. It’s very traditional.”

’Course, now I’m thinking I should order something to share with Carla back home. Jackie sees me eyeing the blackboard.

“You should have what I had, the beet salad,” she says. “I think it was $12, and I added a breast of chicken for $5. Of course, I’m a Republican. Bill over there, he’s a Democrat. He’d go for the red-blooded burger, right Bill?”

I go for the burger not because of politics: Carla just ain’t a nuts-and-twigs gal. But I get a Caesar salad as the side instead of fries or soup.

I have to take a bite before I pack it for the voyage home. And, as promised, its meat patty’s crunchy on the outside and tender pink inside. Must be a half-pounder. Maple bacon’s thick and wicked, too.

But nothing will beat that silky sensuality of my bisque. And Paul Dobson, the bullfighter who started this place, nailed something beyond the food. Between spurts of conversation, I find myself looking around, thinking of the political fights and confessions and jokes this counter must have witnessed over the past 100 years. Also, they say a couple of ghosts live here. Gotta get Carla down. She’s pretty psychic.

“Where the hell are you?”

“I’m at your next pit stop, sweetheart. You’re gonna fit right in!”

I head out into the night, much better armed with the holiday spirit. Can’t help thinking of Tiny Tim at the end of A Christmas Carol.