In pursuit of Nirvana 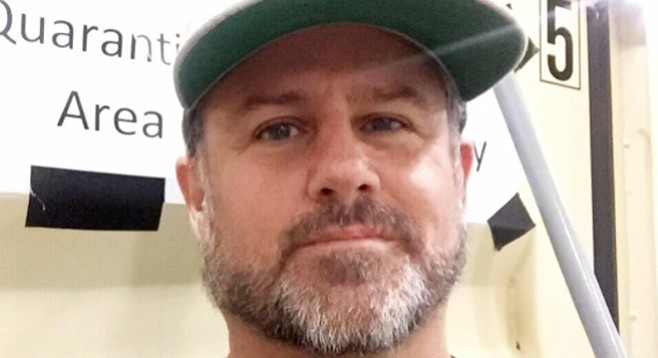 Former 91X DJ Marco Collins resides in Seattle now, but he still rents a storage space in San Diego. The unit is notable because it houses a large amount of unique music memorabilia that he has collected over his long career in radio. Earlier this year, Collins nearly lost all of it when he failed to the pay the rent.

“I’ll be honest with you, I just didn’t have the money,” Collins explained. “Not being gainfully employed can take a toll, and I just haven’t been able to get the stuff from San Diego to Seattle. It’s expensive to rent a van, and I didn’t have the money. I keep coming down and getting it in pieces, but there was probably three months of rent that I hadn’t paid that I was backed up on.”

Collins sent out a last-minute mayday message on Facebook the night before the unit was set to go to auction, and local musician Vanja James set up a GoFundMe page. By the next morning Collins not only had enough money to pay the back-rent but numerous months in advance as well.

The loss would have been déjà vu for Collins, who at one point lost another storage space in Seattle under similar circumstances.

“Years and years ago, I lost a Nirvana gold record. It’s resurfaced several times all over the U.S. and people are always trying to get me to pay for it with some incredible price tag attached to it. So, I’ve never been able to get my hands on it again,” he said.

Collins recently visited San Diego to sift through the unit once again as part of his effort to eventually relocate all of his belongings. While he was digging, he unearthed a digital audio tape (DAT) of an early mix of Nirvana’s In Utero LP, which he received from an unnamed source pre-album release; also a collection of photos of Hole touring in Amsterdam from 1994.

San Diego music historians may be most blown away by an item he ran across from his earliest days at 91X: a cassette recording of an interview with the band Pitchfork, which took place at SeaWorld.

“The guys took me to SeaWorld and we did the interview in front of the seal show! It was one of the first interviews I did with a local band on 91X. They only had a seven-inch single out,” Collins said.

Some of the bounty from Collins’s mining expedition was in his ’90s memorabilia exhibit named Nostalgia Is for Losers, which showed last week in Seattle.