Consumers happy to buy from companies other than Pemex 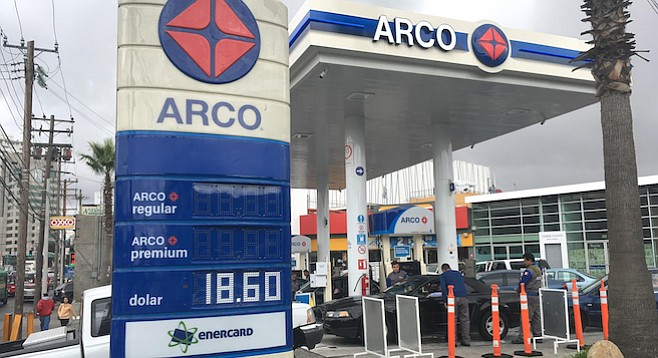 “There’s an Arco by my house. It’s the same thing, just with more people in line because the gasoline is supposedly gabacha,” says Linda Goodman, a Tijuana local. “The gasoline liberation allowed foreign business to administer, distribute, and sell gasoline, but it doesn’t allow them to import; it’s the same gas just under a different brand. I’ve seen white tanks without the Arco or Pemex logo refueling at night and the prices remain the same.”

Following a constitutional energy overhaul, new brands of gasoline are allowed to operate in Mexico for the first time in the country’s history, ending the gasoline monopoly by the state-owned company Pemex. The energy-reform law modifies the 1938 law enacted by then-president Lázaro Cárdenas, also known as the Mexican oil expropriation act, which nationalized all petroleum enterprises, including exploration, extraction, refining, and commercialization.

The energy overhaul caused chaos in Tijuana and Mexico at the beginning of 2017. Protesters sporadically blocked highways, gas stations, and the border, causing gas shortages. The protests over el gasolinazo lasted until late March.

The first foreign gas station to set up in the border region was an Arco in Otay in August of 2017, followed by more Arco stations throughout Tijuana, occupying what used to be Pemex stations.

There are now over 30 gasoline brands in Mexico, both national and foreign, but there is only one provider — Pemex. The state-owned company went from a monopoly to controlling 82 percent of the market, but they remain the main infrastructure operator for importing and distributing fuel. It will be at least two more years until private and foreign gas companies have their own terminals, pipelines, and warehouses.

Arco has stated plans to open 200 to 400 stations in the state of Baja and its neighbor state, Sonora. British Petroleum opened a station in downtown Tijuana near the border in September and another in Otay, for a total of 87 of the 1500 they plan to open in the country. Chevron is the latest to join foreign petroleum in Mexico, opening a gas station near Playas de Tijuana on December 13th.

Social media users shared pictures of Pemex trucks filling the tanks at foreign-branded stations. This has not stopped Arco from enjoying a surge in the market, as Mexican consumers have a long history of claims that Pemex cheats them at the pumps with inaccurate meters.

So, if the gasoline you buy at the ARCO station comes from Pemex and is the same stuff and the controlled price is the same, why go to ARCO? The story mentions the distrust of locals in the accuracy of the pumps at Pemex. Gee, why would they doubt the government owned oil company? LOL Could it be that brand new, clean and bright stations are in stark contrast to the run-down and often-filthy stations bearing the Pemex logo?

In the old days of the US oil business, Big Oil found that the retail marketing of their products was not very profitable at all. They made their money from producing the oil (pumping it from wells) and from refining (turning it into useful fuels or feed stocks for petrochemicals.) But while that may no longer be the case, it is still hard to understand why ARCO is opening gas stations in TJ. The conclusion I reach is that it is the first step in being able to refine its own products and eventually produce them in that country. When that happens the expropriation of the 1930's will be history, and any/all petroleum corporations will be able to operate there. Maybe that will bring some real competition and decent customer service to buying motor fuel in Mexico.

Hopefully the retail gasoline market will begin to establish local ownership of stations. In the U.S., owning a gas station was a good middle class occupation. Breaking Mexican state owned monopolies will benefit the consumer and the entrepreneur. Let’s hope this is progress for Mexico.