Christmas fizz for friends and the fat elf himself 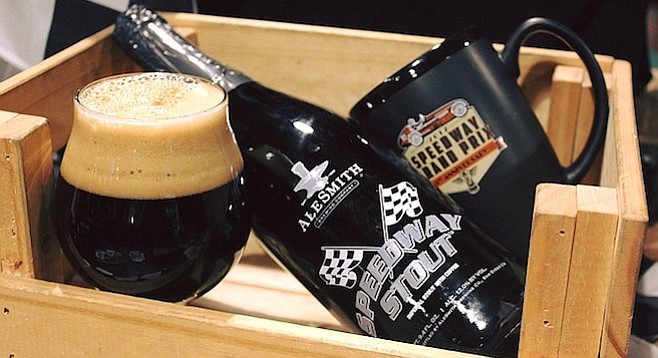 By definition, beer enthusiasts buy themselves beer all the time. So, if you're looking to make the gift of beer count, it has to be a special beer. Here are a few good bets produced locally available in mid-December with a quick stop at the respective brewery's tasting rooms.

AleSmith Brewing The term most commonly applied to AleSmith's barrel-aged beers is "world class," due to the number of awards its nuanced, oak-aged ales have won. Through Christmas Eve, AleSmith offers rotating 750ml bottle releases with special gift packaging and a snifter glass. Even without the packaging, a barrel-aged version of its celebrated coffee stout, Speedway Stout, will prove a welcome gift to any beer snob. For a rarer find, try the chocolaty imperial porter Noble Empire, which pulls hints of toast and vanilla from its time in the barrel. For the collector, opt for Private Stock, a malty English old ale recommended to age 20 years for maximum complexity.

Stone Brewing Stone decided to celebrate the opening of its Berlin brewery last year by inviting friends to visit and create what they're calling the Groundbreaking Collaborations series. Seven or eight of the 750ml Groundbreaking releases may be found at Stone locations around the county. Most qualify as giftworthy, but be on the lookout for Züper Magik W00tstout. Stone cofounder Greg Koch makes this stout annually with former Star Trek star Wil Wheaton and weird-news aggregator Drew Curtis, but the heavier version made in Berlin features almonds, hazelnuts, and pecans, and was briefly aged in German whiskey barrels. Perhaps more intriguing is the Sticks 'n Stones beer made with Lost Abbey. This intriguing dark imperial lager was made with German yeast and aged with wood chips inside granite barrels.

Port Brewing & The Lost Abbey Collaboration or not, anything barrel-aged by The Lost Abbey makes a welcome gift for fans of wild-fermented and sour beers. But since such beers don't really scream holidays, Lost Abbey has come up with a season-appropriate release. Gnoel de Abbey is a brown ale offering notes of espresso, bakers’ chocolate, and vanilla. It'll make a good pair with another holiday favorite from Lost Abbey's sister brand Port Brewing: Santa's Little Helper remains one of the county's best imperial stouts, providing a great adult alternative to hot chocolate.

Rip Current Brewing Named America's very small brewery of the year in 2015, Rip Current has grown since then, but not by much. So it's only this December it's released one of its most popular beers in 22-ounce bottles: Vanilla Storm. The imperial porter is brewed with both Kona coffee and Madagascar vanilla beans, resulting in a dark beer smooth and rich enough to cache for a cool night. The extremely limited quantity makes this beer likely to sell out quickly, despite only being available at the brewery's San Marcos and North Park tasting rooms.