Get out the Blue Guitar case

Shop to close in February after 57 years 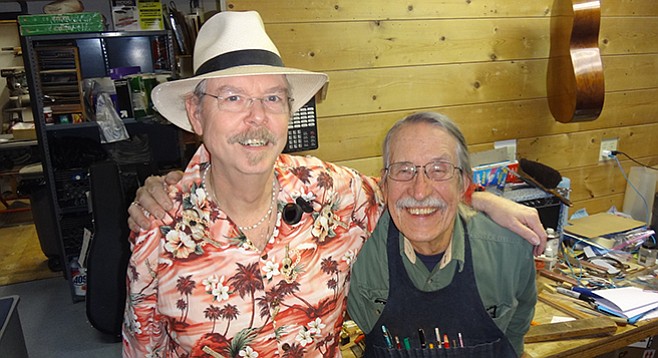 The Blue Guitar has undergone many changes since it was founded in 1961. It appears as if its final transformation may be an upcoming disappearing act.

“Yuris Zeltins was our shop founder, he has now been gone for about a year,” Blue Guitar owner DeForest Thornburgh explained. “I wanted to have the shop go for another year after Yuris left just to pick up the pieces because this place has been around for the last 56 — it’s going to be 57 — years. Myself, I want to retire. I need more time to do things with my family and the house. So it’s about that time.”

The shop shifted location and focus during its long run, sometimes centering on guitar retail sales while at other times functioning as primarily a repair shop that sold a couple of instruments and strings. Thornburgh purchased the shop in 2003 and moved the operations from India Street to Mission Gorge. In its final incarnation, the shop had both a strong retail presence and repair side. Zeltins, who rose to legendary status as a guitar luthier over the years, continued to do repairs out of the back room until he moved to Seville, Spain, last year.

Zeltins isn’t jumping on the retirement wagon just yet, though. According to Thornburgh, he has a small shop in his new digs that is akin to “a boutique or fairy-tale shop that you would see in a book or a magazine article.” He also joked that Zeltins is such a disciple of his craft that he will likely “drop dead at his bench”... and, likely, not anytime soon: it is common for members of his family to live into their 100s.

There is talk of Blue Guitar repairman Scott Quiroz opening a new shop with some of the guitar teachers who give lessons at the shop, but Thornburgh thinks it’s unlikely that they will continue using the Blue Guitar name.

Thornburgh had a long career working with computers before pivoting into guitar sales and repairs. He refers to himself as being "Dilbert" (a comic-strip character) pre-Blue Guitar. For him, the toughest part of retail guitar sales was often “waiting for someone to walk in.” On the flip side, the most rewarding aspect was the relationship that was built between the customers and the shop.

The Blue Guitar will shut its doors permanently by February 14, 2018. Clearance sales are in progress.