Thanks for the food desert, Albertsons 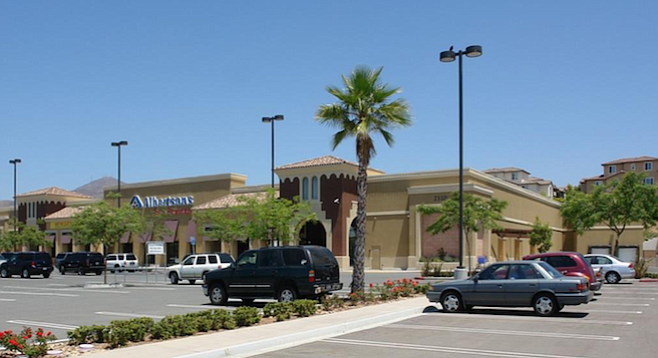 Julie Lee, the owner of Beasley Cleaners, said when Albertsons shuttered its doors her revenue went down, even though her rent continued to increase each year. “I’m trying my best, whatever I can do to survive, but it’s still going down.”

The Shops at San Miguel Ranch, on Proctor Valley Road, opened in 2007 with 28 storefront spaces. Within three years, the owners foreclosed and Merlone Geier Partners bought the outdoor shopping center. Empty commercial real estate remained a consistent problem and then in February 2014 the Albertsons closed.

With no new tenant set to occupy the large warehouse space, San Miguel resident Sara Ramirez took to Facebook and created the “Revive the Shops at San Miguel” page. She recruited fellow resident Mirele Gugger, who explained, “It used to be just the two of us, and then two other moms from the area. We were just very upset at what was happening. We were also in that neighborhood specifically because there was a grocery store there.”

Ramirez said she conducted surveys asking the community what they would like to see in the space. She spoke with the Chula Vista mayor Mary Casillas Salas. She met with District 1 councilmember John McCann, who launched a petition that garnered 1201 signatures; it was submitted to Merlone Geier Partners. 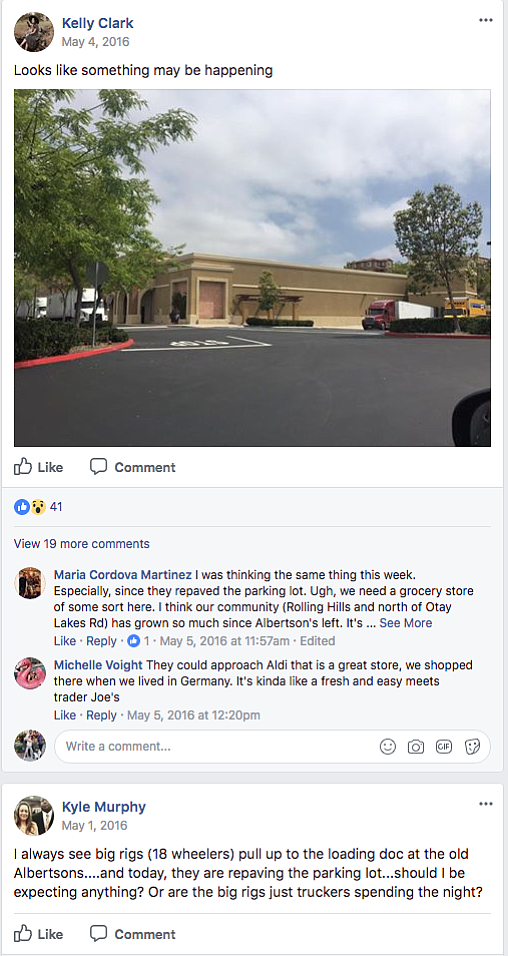 Community members have been watching the vacant store like hawks.

In May 2016 it looked as though a new grocery store might move in. A community member posted on Facebook, “I always see big rigs [18-wheelers] pull up to the loading doc [sic] at the old Albertsons.” Three days later, another community member took photos of trucks in the loading zone. Nevertheless, thick plywood remained shuttering the doors and windows. A sign warned trespassers of security cameras and alarms.

One month later, on June 14, 2016, officers took part in an undercover narcotics investigation at the Albertsons and shot one man dead. Neighborhood residents, including Ramirez and Gugger, said the incident was proof that the building attracted crime and blight.

Nearly four years after its closing, about 30 community members met on Wednesday, November 15th, at the Bonita-Sunnyside Public Library to talk about solutions. Ideas included erecting an art center, having a fun zone, attracting another grocery store, or subdividing the property for a foodie paradise. Ultimately, however, one problem held attendees back from finding a viable solution.

Eric Crockett, economic development director for the City of Chula Vista, explained in an email to community member William Richter: “Albertson [sic] still holds the lease until 2023 and they will not sub lease to another grocery store. They are in essence paying the lease to keep out competition. The owner [Merlone Geier Partners] offered to buy them out but Albertson wanted a restriction that would have prohibited any grocery store to go into that site as a condition of the buyout. This condition was not acceptable to the owner. I don't know of any solution to this situation until Albertson is motivated to either get it [sic] of the lease or subdivide the space for other tenants.”

In a subsequent phone interview, Crockett explained that he received this information on November 5, 2015, when he attended a meeting at Merlone Geier Partners’ headquarters in San Diego. Although Albertsons executives did not attend, a broker hired by the company to sublease the property was in attendance. At that time, Crockett says, Merlone Geier Partners explained that Albertsons would not consider subleasing to another grocery store and would not sub-divide the property.

Kevin Wing, the portfolio manager for the San Miguel Ranch Albertsons, vehemently denies the claim. Wing, whose office is located in Fullerton, says he receives regular calls from Albertsons executives at their Boise, Idaho, headquarters asking when the store will be sub-leased. “We’ve engaged a broker to assist us in marketing the space.”

The problem, Wing says, is that it’s a difficult time in the retail business. Competition in the grocery business is fierce with Walmart, Target, and dollar stores cutting into market share. “We’ve contacted every grocery operator and it’s a difficult space to go into…. This is out in a neighborhood and it’s a sleepy neighborhood. It’s a great neighborhood with a great income, but there’s not a lot of density there.”

Albertsons has fallen on turbulent times. In February 2014 the company closed 26 underperforming stores in eight states, including 11 in California.

A mere nine months later, Haggen filed for bankruptcy and then sued Albertsons for $1 billion, charging that Albertsons engaged in a campaign to stifle competition. Albertsons countersued, claiming Haggen failed to honor an agreement to buy millions of dollars’ worth of inventory after buying their supermarkets. Albertsons settled the case in January 2016, paying $5.75 million and explaining that the complaint lacked merit, but the settlement enabled the company to avoid costly litigation.

During both 2015 and 2016, the San Miguel Albertsons wasn’t their only leased space that had a suburban community upset. Residents in Grand Junction, Colorado, and Schaumburg, Illinois, faced similar problems.

An August 2015 article from Grand Junction quoted the landlord for the Monument Village building, including the vacant Safeway, as saying, “Albertsons will only let go of their lease if [the owner] agrees not to allow another grocery store to move in that may cause competition. [The owner] adds that they are within their legal rights and the terms of the lease, to do that.”

A September 2016 Chicago Tribune article reported that a Dominick’s store in Schaumburg, Illinois, stood dark for three years. Albertsons acquired Safeway — Dominick’s parent company — and then had control of Dominick’s leases. It then extended its lease on the store for another five years, through May 2021, and officials claimed Albertsons was paying rent on dark buildings to block out competitors.

San Miguel community members attending the Bonita-Sunnyside library meeting still wonder how the space can be re-activated. Residents mentioned property-tax incentives or having the city buy the property. Crockett, however, said in a phone interview that the Prop C voter initiative in 2006 removed the city’s ability to use eminent domain for economic development purposes.

Ramirez suggested that if Albertsons has indeed been shutting out grocery stores in order to have residents make their purchases at the nearby Vons, “One of our last solutions was, ‘Let’s just start a big boycott of Vons. Let’s stand out there and boycott Vons and make a lot of noise.’… That’s kind of what it came down to.”

In another phone interview, Wing said he plans to be at the next community meeting. “I strongly believe in a collaborative effort. I’ve always been very successful in this type of approach to our dark stores when they do close. Especially this one. It’s been a head-scratcher because it does look nice.”

Crockett acknowledges that his Merlone Geier Partners meeting took place a fair amount of time ago (November 2015); in an email, he wrote, “Attached is the previous listing and the person we used to contact regarding the Albertsons store on how her efforts were going for a new tenant. Craig Ruiz was my staff liaison with her and it was through Craig that we were previously informed that the Albertsons/Vons was not willing to subdivide the building or put in a grocery store. If that has changed that would be great news and hopefully their current listing (which I don’t have) would indicate what the minimum square footage would be allowed for rent (this would be industry standard for listing a property that could be subdivided). This clarification in the listing will help attract tenants looking for smaller footprints.”

The Albertsons listing — passed out during the community meeting with the later date of April 2016 — does not indicate a minimum square footage allowed for rent.

Merlone Geier Partners did not return numerous phone calls to respond to this article.

Albertson's has been shuttering stores in this county for years. But where they pulled out of spots that I know about the space was taken. On Encinitas Blvd, just east of I-5, shortly after they closed up, Smart & Final Extra moved in.

I'm aware of Ralphs shuttering two supermarkets in Oceanside. The first one to close was on Oceanside Blvd, adjacent to I-5 and the other on South Melrose Ave (the street address of the store was on Cannon Road). Neither space has been taken. I have a real problem believing that any chain that was hurting enough to close stores would keep paying the inflated rent on he space for years after and blocking it from being reused by another food store. But, hey, strange things happen out there. There is no doubt that the county now has excess retail space, and that some of it just will not find another occupant, ever. But a supermarket space in a fairly new center in a new area doesn't seem to fit the idea of "excess."

Wing is correct, in that "the grocery business is fierce" and margins are thin. Amazon has made it even more competitive. Empty supermarket spaces can be used for offices instead, such as for Social Security, DMV, insurance, etc.

carve the space up into a couple of restaurants which we don't have enough of in Chula. just no more crappy taco places please

If you are looking for sit-down restaurants, they are getting scarce, even in some of the more affluent parts of the county. Seems that help, now that the minimum wage is up and going higher is costly, and the prices also have to match. The "fast casual" approach--menu on the wall, order at the counter, pick up your own food, dishes, tableware--is emerging as the norm. I guess there will always be Denny's.

I hate Albertson's. Overpriced, never have any check-out lanes open. (Thank you unions). Their shopping carts need rehab or disposal. Their clerks could take a page from Trader Joe's... 7 lanes open. Albertson's is not doing me a favor by being overpriced, under-staffed and making me wait in line longer than the time it took me to shop. Albertson's is why Amazon will crush them. Albertson's has their corporate heads up their.......

The unions have nothing to do with how many cashiers there are. Management determines the staffing not the union. Albertson's as with all grocery stores are in the business of making a profit. They could care less about "food deserts" or anything else.

You mean they couldn't care less. ;-)

I do. I spent too much time in 4th grade.

Same reason why there were three Wells Fargo's at one intersection in Encinitas, or two Shells across the street from each other on Leucadia Blvd. Keep out competition.

Ken, If there were that many WF branches at one intersection, it probably didn't last long. Back about 1990 Great American folded and WF bought up the branches. Then San Diego Trust sold out to First Interstate which was in turn taken over by WF. So, there was the possibility that none of those branches operated by Wells was actually its own branch prior to the mass insanity and merger-mania in banking. One could have been a former Great American branch (with its distinctive blue tile roof), another a former San Diego Trust branch (they tended to be big), and the third one a former First Interstate office. I do know that after WF took over Great American, they shuttered most of those branches, which is why so many of them are now used by other operations, many of which had the roofs repainted red or brown or . . .

And then Wells Fargo later became quite corrupt, by opening up millions of unauthorized accounts for customers, so the employees could earn big bonuses. Mr. Wells and Mr. Fargo are rolling over in their graves!