270 degrees of unobstructed views with no neighbor in sight

Balinese contemporary, next to the Del Mar fairgrounds 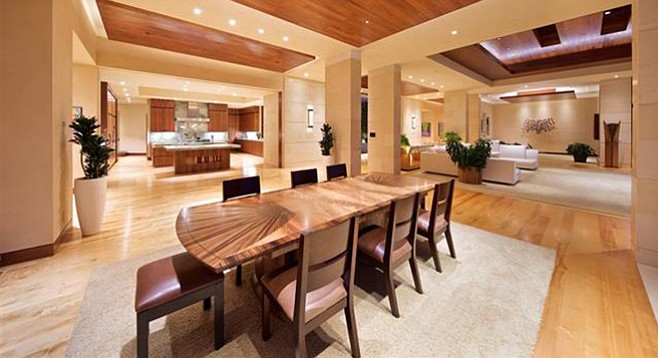 “Welcome to the ‘King of the Hill,’” beckons the listing pitch for 5160 Rancho Del Mar Trail, a five-bedroom, six-and-a-half-bath home boasting more than 9500 square feet of living space situated “within the prestigious, private gates of Rancho Pacifica,” a development located just south of Fairbanks Ranch Country Club and a few miles east of the Del Mar fairgrounds and racetrack.

Built in what’s billed as a “Balinese Contemporary” style, the home features an extensive use of acacia koa wood “imported from the Hawaiian islands” — per the listing “the name ‘Koa’ in the Hawaiian language means brave, bold, fearless, and warrior.” Other luxury finishes include “Onyx Jade Green” kitchen counters and backsplashes, “prized for its exotic and translucent qualities” and imported from Afghanistan; “Monkey Pod Ceilings” in the great room, dining room, and office suite; and birch floors with African mahogany trim (radiant heating is also installed under the entire home’s flooring). 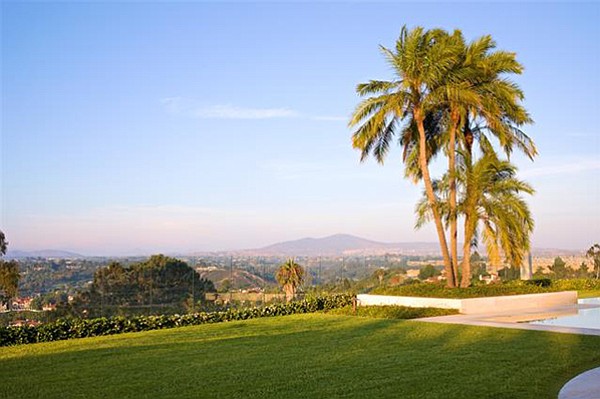 Just under one acre of manicured hilltop grounds

All of the bedrooms, including the 340-square-foot master (about the size of an $1800 apartment downtown on its own) include en-suite baths. The home also features a movie theater with “full Runco theater with aspect ratio flexibility,” Savant home automation system, and retractable glass walls to join indoor and outdoor living spaces. 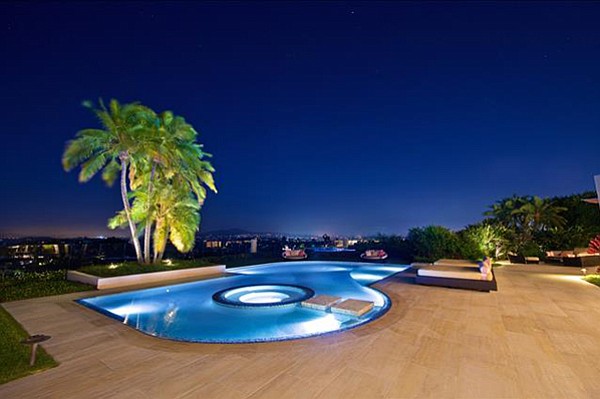 The spa sits in the center of the pool

Outside, the “magnificient estate offers 270 degrees of unobstructed, dynamic views with no neighbor in sight” from the cul-de-sac lot offering just under one acre of manicured hilltop grounds. A side patio offers a quiet gathering place in front of a white stone fireplace, while a unique pool feature is the spa — instead of being sited at the pool’s edge it sits in the center, accessed via stepping stones. 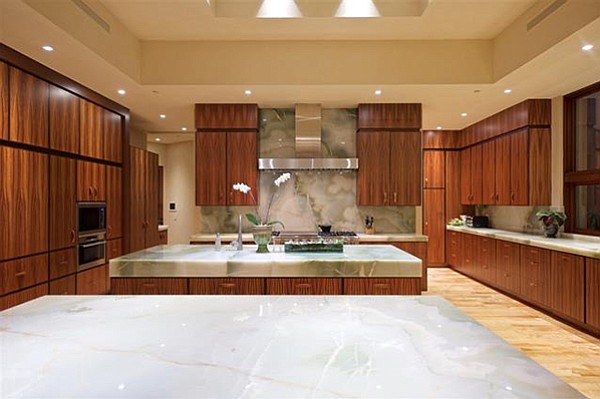 Though the home was built in 2013, this is the first time it’s been offered for sale. Current owners Russell and Zina Geyser purchased the land for its construction in 2012 for a reported $2.7 million, significantly less than the $3.5 million the previous owner shelled out in 2007, when the last housing crash was just beginning to pick up steam. The property, including both the lot and residence, currently carries an assessed value just under $5.5 million, with an annual property tax bill in excess of $107,000.

Mr. Geyser is a noted real estate investor and financier — he’s also dabbled in Hollywood film production and at one point owned a majority stake in the San Diego Aviators, a World Team Tennis club that relocated from New York in 2014.

The Rancho Del Mar Trail estate was listed in early November, with an asking price of $14,500,000 that remains unchanged to date.