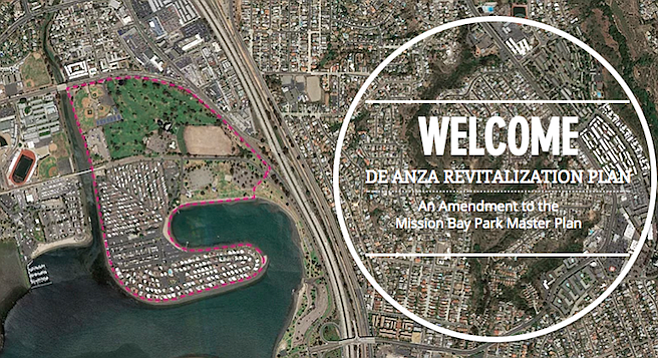 A conflicted, somewhat confused Mission Bay Park Committee voted 5-3 to go forward with a plan for the DeAnza Cove Tuesday night (December 5th) after hours of passionate testimony from people who want different things for the land.

The vote brings to an end the large part of the public discussion — the municipal golf course, Campland by the Bay supporters, the Audubon Society’s ReWild advocates, those who favor the Mission Bay Gateway plan, local tennis players, and a soccer coach all saw their hopes hanging in the balance. 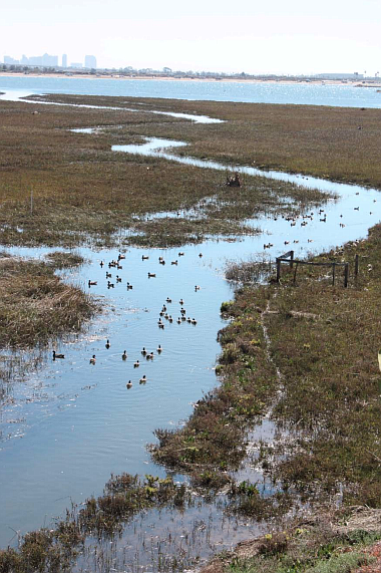 The committee struggled with whether or not to delay their decision for two months (as ReWild members advocated) or to pick one of the two plans so that the environmental impact report could be set in motion. Members repeatedly asked if they could see environmental reports and were told that such reports won’t be generated until the committee selects a plan.

“Without a plan, there’s nothing to study,” chairman Paul Robinson declared.

The eight members of the panel presided over a public process that began almost two years ago, spurred by the city finally regaining control of the land long-leased to DeAnza Cove mobile-home residents, who fought their eviction until the city bought them out.

The plan includes the 76-acre mobile-home property and the 46-acre Campland by the Bay property west of Rose Creek. The city long-planned to turn the Campland plot into marsh adjoining the Kendall-Frost Reserve to the north, and Campland was left to jostle with the other interests trying to hold onto or gain land on the east side of the creek.

The city’s planning team brought two alternatives to the meeting, both of which retain the 18-hole golf course and most of the north portion. The differences are at the south, where guest housing (a campground) gets most of the hook-shaped land. The guest housing is outlined by restored wetlands and a bicycle-pedestrian path. The southeastern tip is separated from the mainland by what’s called a shallow swale, meant to capture and filter water when the bay’s water level is high, like after a rainstorm. ReWild advocates said that plan — different from those on the website — became available at the last minute. 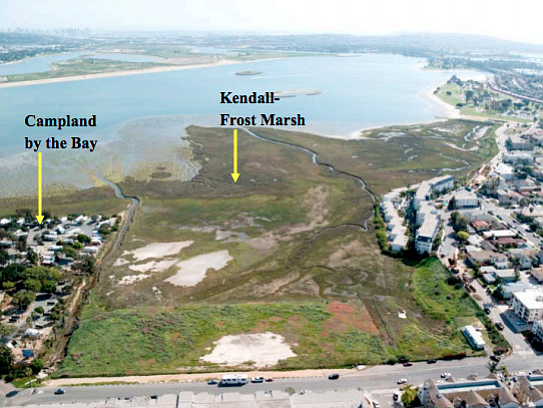 While golf enthusiasts were pleased to see the 53-year-old course remain intact, few of the other people who nearly filled the Mission Bay High School auditorium were satisfied.

The final plan allows for 38 acres of wetland around the perimeter and on the toe of the peninsula's boot. There are 40 acres set aside for “guest housing,” along with ideas for ball fields and a restaurant, and beach access for water sports that don’t rely on combustible engines.

ReWild, led by Bay Area resident and former San Diegan Rebecca Schwartz Lesberg, had asked for far more wetlands (up to 170 acres in 2014 documents) and brought the California Coastal Conservancy and U.S. Fish and Wildlife Service — both people and funding — with them.

ReWild began seeking money for its plans for Mission Bay wetlands in 2013, raising $460,000 from the coastal conservancy and another $25,000 from U.S. Fish & Wildlife in 2014 while the city was still tussling with mobile-home residents.

Over the years, ReWild succeeded in dominating the public conversation, much to the alarm of the golfers, who’d noted that the plans the group presented to the city shrank the golf course and, in one, eliminated it altogether.

Kendall-Frost marsh, Campland by the Bay in the background

The early drafts drawn by the city had the golf course reconfigured but still there. It’s unclear how the golfers were able to hold on to the course at the 11th hour, but they did and they expressed their gratitude. (High school students, a Point Loma High School golf coach, and senior users said it's a fast, flat course that's great for beginners.)

Campland by the Bay supporters — people who said their families enjoyed the grounds through three generations — remain in limbo. About 80 percent of Campland’s visitors are San Diego residents, and Campland currently pays about $3 million in transit occupancy taxes and rent, according to Jacob Gelfand.

The threat of sea-level rise alone should prompt more wetlands as a defense, ReWild members argued.

Even the 2012 Mission Bay Gateway plan came up, with Scott Chipman advocating for more community access. The park belongs to local residents, he argued.

“We should not do this complete redesign without considering the community,” Chipman said. "The plan reduces camping, reduces access to the shoreline. There’s no amphitheater. There’s no skateboard park. There’s no marina.”

After dozens of public speakers were heard over about two hours (allowed a minute each), the panel struggled to decide whether to select a plan.

ReWild had asked that the decision be delayed, and several committee members suggested a two-month delay but were unable to push the idea through on a 4-4 vote.

After a series of confusing conversations in which committee members said they wanted more information and city staff responded they could not generate a study without knowing what they were studying, the panel voted to accept Alternative #2.

Schwartz Lesberg, who led the ReWild effort, decried the panel’s vote, saying that members only voted because the chairman had stood over the other seven and pressured them. The group previously raised the threat of litigation.

But with the choice made, city staff will begin the process of developing an environmental impact report. They do not expect to bring the review back to the panel and the public for a last chance to comment until early 2019, Muto said.

Whether or not public comment can change the course of the plan approved Tuesday remains unclear.

Muto assured the panel that they would see the alternative plans in the review, as required by the California Environmental Quality Act, but the promise they sought that they could change their minds once they saw environmental reports seemed hazy at best.

Just what you need, a mosquito incubator. Say hello to Zika and West Nile fever. Mission Bay was a swamp and dredging it was greatly beneficial to San Diegans. Don't go backwards.