Stay on the Anderson Canyon trail

Watch for beetles, ants, and our friend the Torrey pine 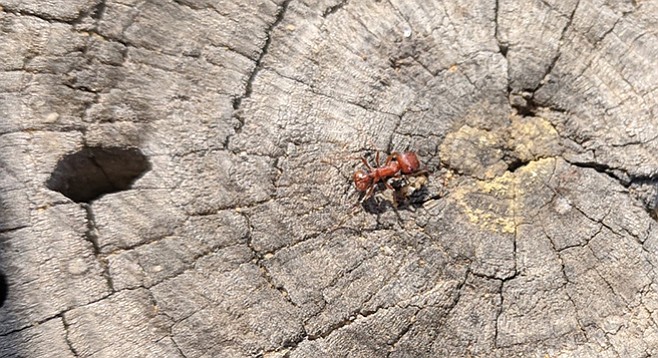 Del Mar Canyon Preserve, sometimes alternatively known as Anderson Canyon, has two of the best elements of San Diego County hikes: stunning views and unique biodiversity. The trail is short and easy, but take time to enjoy the location. From the bluff top, there is access to Torrey Pines State Beach for a longer adventure. 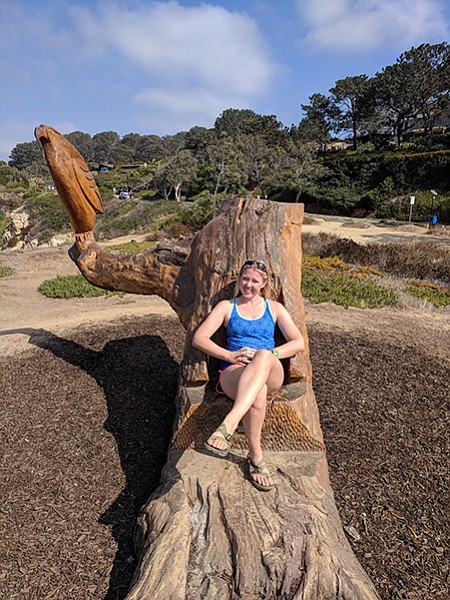 The “Sunset Seat” was designed by Del Mar resident David Arnold and carved by Tim Richards in 2015.

There are many unofficial trails in Anderson Canyon, but they are not recommended because the accumulation of unauthorized use can degrade the habitat quality for plants and animals calling the area home. In some instances, the footing can also be treacherous.

Enjoy what may be the most unique spot in San Diego for ocean views. The “Sunset Seat” was designed by Del Mar resident David Arnold and carved by Tim Richards in 2015. It brought new life to a Torrey pine that was killed by bark beetles. The red-tailed hawk carved into a branch is an impressive piece of artwork. 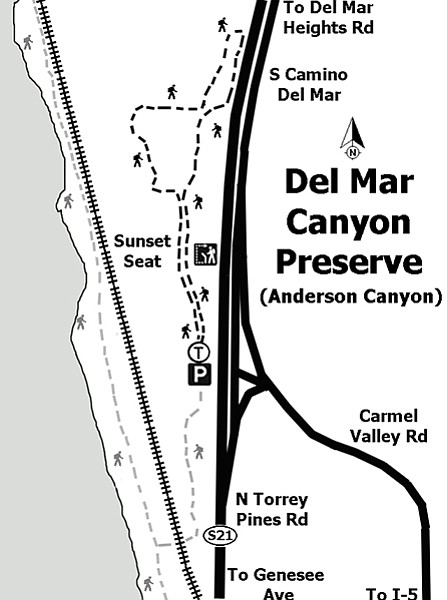 Look closely at the uncarved portions of the tree and notice the small and squiggly trails carved by the bark beetles known formally as the five-spined engraver beetle. The trails bored by the insects are evidence of the larvae feeding on the tree’s cambium. While most of a tree’s woody portions are dead cells, the cambium is an essential layer of living plant cells just under the tree’s bark. A tree’s growth rings are produced by the cambium. Healthy trees usually produce extra sap to push the insects out of the trunk and can survive a bark-beetle attack. 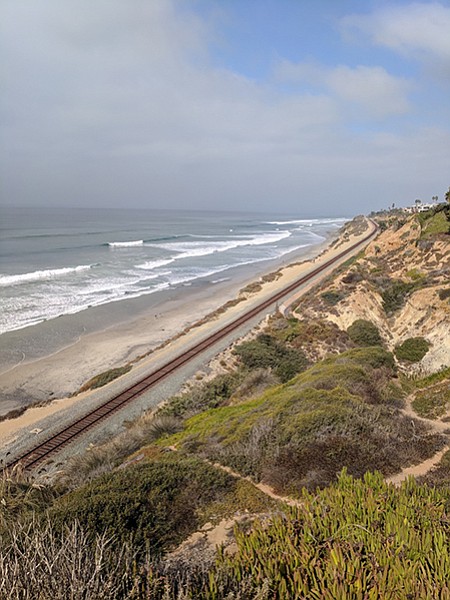 From the bluff top, there is access to Torrey Pines State Beach.

Trees stressed by drought or older trees might have a harder time resisting damage by bark beetles. Look at the series of funnels strung together that attract and trap the beetles with help of an insect pheromone to help reduce tree mortality. Look inside the trap to see what these insects look like.

Torrey pines are the rarest pine in North America, with approximately 7000 individuals occurring in Del Mar. A second subspecies of Torrey pine occurs on Santa Rosa Island with about 2000 individuals. These rare and majestic trees might steal the show in terms of obvious biodiversity.

Can you spot any ants? If they are red and larger than the small black Argentine ants, which regularly invade homes in San Diego, the ant is probably a native harvester ant. Watch them for a minute and notice how meticulously they remove rocks from their nest and bring in forage. Unfortunately, populations of these native ants are getting much smaller. Not only are they competitively excluded by the invasive Argentine ants, but habitat fragmentation and other disturbances have negative effects. This decline in native ants is unfortunate at face value, but it has also been linked to huge declines in the coast horned lizard populations. The coast horned lizard relies on native ants for much of its diet. Argentine ants cannot substitute as a food source as the lizards have trouble noticing their small bodies and the nutritional value of the Argentine ants is poor.

You can even get close to the trail by using public transit! http://www.gonctd.com/trip-planner/