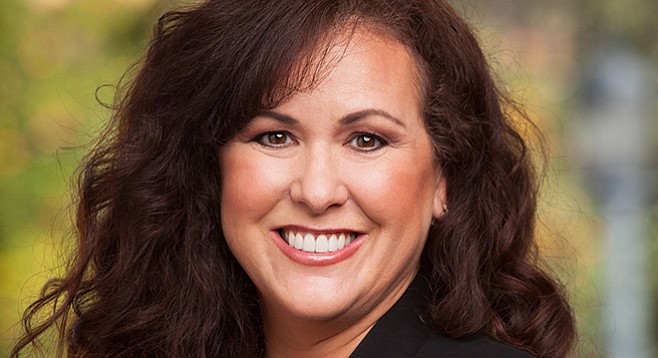 A combination of two of the world’s biggest oil companies has kicked in $50,000 to the California Latino Legislative Caucus Foundation at the behest of Democratic assemblywoman Lorena Gonzalez Fletcher. State disclosure records show that Aera Energy, LLC of Bakersfield, owned by Shell Oil Company and ExxonMobil, contributed the money on August 17. Among its operations in Ventura, Monterey, Fresno, and Kern counties, the company is seeking to sink 141 oil wells on a previously moribund field near Santa Maria and has been spreading its charity money far and wide.

“Our employees served food every week this summer at the Santa Barbara Foodbank’s “Picnic in the Park” events,” per a spokesman’s statement last month. “We donated funds for a new roof for the Boys & Girls Club, and we sponsored The Hancock Promise, a program that gives free tuition to incoming freshmen at Hancock College. We’ve also partnered with, to name just a few, Central Coast Future Leaders (Latino Legacy Awards), Partners in Education, United Way, Economic Alliance of Santa Barbara County, and the Workforce and Literacy Initiative.”

The outfit is also looking to redevelop other unused oilfields around the state but last week lost a major battle when the Newport Beach City Council voted unanimously to rescind development permits for Newport Banning Ranch, a controversial Aera partnership seeking commercial and housing development on 401 acres of played-out oil property. In March the state supreme court held that the city “suppressed” data about the project’s negative environmental impacts. An earlier try for the development was shot down by the state coastal commission on a 9-1 vote in September of last year.

Hypocrisy is the original political sin. How can an elected official tout their environmental credentials, legislation and support from Sierra Club and turn around taking $50,000 from those who want to sink 141 oil wells on a previously moribund field near Santa Maria. There is one offense for which there is no pardon - preaching one thing at the public while practicing another. Incompetence, duplicity, arrogance – each one hurts. Hypocrisy kills.

She and hubby Nathan want to come across as the woman and man of the people. Her labor union record helps that story along. But like so many establishment Dems, they are for sale to the highest bidder, and not only accept big corporate money, they solicit it. Juan Vargas, the border district congressman, has been at the trough of big corporate lobbyist money for as long as he's been in that office. (He was prior to that time, another story itself.) But the voters just think that he's "one of us little people" and mark the square next to his name on their ballots. And know what? That will probably work for lovely Lorena and Nathan, too.

Just another one who will do anything for money.