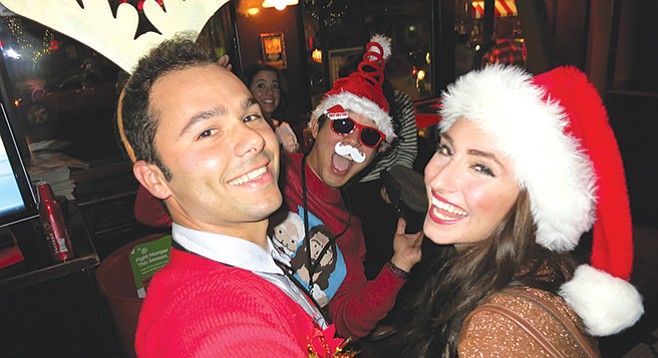 Winter. It’s the five o’clock of the annum. God’s own cocktail hour. A time to rejoice and be merry and say things you’ll later frown about at family gatherings. New year, new you. This is it. Go boldly into that frenetic future. Thrust your glass to the heavens. Sing the dang song. Howl at the yawning void. Be jolly, or don’t. Just don’t be a Grinch. Don’t go Scrooge. ’Tis the season. Get out there and do you some good, pilgrim. Okay now. Let’s be reasonable. Hold on to your drink. Grab me one, too. We’re gonna need ’em.

Sip local craft beers, snack on appetizers, and bid on silent and live auction items to support college scholarships and coaching to low-income San Diego youth. On Friday, December 8, from 7 to 9:30 p.m., Holsem Coffee will host the Third Annual Beer Tasting and Auction by nonprofit Education First (not to be confused with the Midway District for-profit English school of the same name), which has awarded over $800,000 in scholarships to low-income high school students in San Diego and seven other cities nationwide since 1996. Tickets are $30 single or $55 bidding couple. Parking: ACE at 3829 29th Street.

Wear a black tie for hepatitis

Put on your formalwear and join the LGBTQIA-friendly LezBHonest Dragon Boat Team for their annual Black Tie Holiday Party at Brick Bar on Saturday, December 9, from 7 to 11:55 p.m. This dance party with DJ Kinky Loops is a fundraiser for the homeless populations who are affected by the current hepatitis A outbreak, which has infected over 540 people in San Diego and killed at least 20. Bring blankets, socks, gloves, beanies, and other winter items for all ages (toy donations are encouraged) and genders. Tickets are $15 presale or $20 at the door. Formal attire required.

Hop in your yuletide suit and order a sleigh down to Tin Roof at 8 p.m. on Saturday, December 9, to join a holiday walking tour of the Gaslamp’s nightlife. A nonrefundable $25 (tickets with various levels of refundability go up to $40) includes complimentary welcome shot, 50-percent-off drinks at Tin Roof, exclusive drink specials at four bars, complimentary cover charges, VIP entry, and a Santa cap at check-in. Themed dress or a casual button-up shirt, jeans, and “stylish” sneakers encouraged. Dress code enforced. Reservations required at [email protected]

Ya like beer? How about trains? Ironic holiday crap? Well, this one’s for you. Chug your way over to the San Diego Model Railroad Museum on Friday, December 15, from 6 to 9 p.m. for the Ales ’n’ Rails Ugly Christmas Sweater Party. For $25 presale or $30 day-of, you get unlimited tastings from local sud staples such as Mike Hess Brewing, Pizza Port Brewing Company, Benchmark Brewing, and Rock Bottom Brewery while raising funds for exhibits, programs, and operations at the only accredited model-railroad museum in the country. One of the largest of its kind in the nation, the museum is home to 27,000+ square feet of tracks, trestles, and trains.

Drink for a cause at 12 Bars of Charity

A wilder man than me once said, “You can’t always get what you want.” However, you can help others get what they need. $10 of every ticket to the 12 Bars of Charity pub crawl, which includes over 20 downtown drinkeries, benefits the featured local nonprofit of your choice; $30 covers a 12 Bars of Charity T-shirt in your team’s color, a shuttle between participating bars, and drink specials from 2 to 6 p.m. on Saturday, December 16. The crawl is self-guided, so you and your friends can barhop at your own pace. Select your team at 12barsofcharity.com/san-diego.

New Year all over downtown

Can’t decide what to do with yourself when the ball drops? Treat a friend to a blind date with downtown nightlife on a pub crawl starting at Taste & Thirst and continuing to eight mystery locations, which will be indicated on a map at check-in along with hours and exclusive specials. On Sunday, December 31, from 6 p.m. ’til bar close, take $4 drafts and 2-for-$16 premium drinks & champagnes with tickets starting at $33 (single), $55 (group of 5), and up to $60 (group of 7). Or just go to Chee-Chee Club and drink cheap for free. I don’t care. Follow your bliss. This is your year.