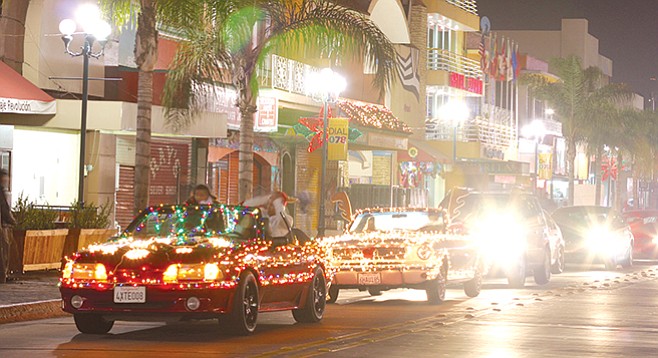 During the holiday season, thousands of Californians head south of the border to join their families for a Mexican Navidad mixed with customary American Christmas traditions. In the Spanglish world, as with the languages, the two nations’ holiday traditions have meshed together. Houses are decorated with nativity scenes and inflatable snowmen. Children write letters to both Santa Claus or El Niño Dios (Baby Jesus) and ask for more presents two weeks later from Los Reyes Magos (the Three Wise Men). Dinner consists of both turkey and tamales. Holiday revelers sip both eggnog and champurrado (Mexican hot chocolate).

Since 1985, the Solo Angeles motorcycle club has hosted the Tijuana Toy Run, a benefit for orphans and children of low-income families. The run will take place on December 17th in four stages set along Avenida Revolución. Hundreds of motorcyclists from both sides of the border meet in downtown to give toys and candy to children. Many bikers dress in Santa Claus outfits, some have real beards and rounded bellies, and others outlandishly decorate their bikes to look like reindeers. It’s a colorful and heartwarming event as burly and tattooed bikers share smiles with underprivileged children.

Help people help others with the sixth edition of Una Noche Realmente Buena, a charity event by Claudia Lomelí, also known as the “Happy Vegan.” Claudia’s vegan store closed in 2017 and is now a humble bazaar called Lapis Lazuli that offers diverse handmade goods, but her annual night to help the homeless remains the same. On Christmas Eve, Claudia and a team of volunteers hand out vegan dinners accompanied with blankets, clothes, and other necessities. Donations are being collected in the aforementioned bazaar, Señor Limon deli, and Happy Pets Store.

Posadas Navideñas traditionally are nine days of religious observance in which families and neighbors re-enact Christmas. But in Tijuana, it’s more about feasting and partying. There are a plethora of posada offerings for the season from humble to extravagant. Besides playing classic and independent Christmas movies, Cine Tonalá will have public and private parties posada style for 12 to 100 people. The one-year-old movie theater will finish the year with a New Year’s Gala with a special menu, champagne, live music by Cumbia Futura, and fireworks on the rooftop.

You could buy a zarape (poncho) in the few curio shops that remain on Avenida Revolución or you could support local artists and designers that sell their handcrafted goods in several “Bazar Navideños.” Pasaje Rodríguez, the art alley in downtown is a one-stop for Tijuana goods with art galleries, cafés, designer shops, comic store, used vinyl and bookstores, as well as a variety of pop-up shops for the Christmas season. La Caja Fuerte, a multipurpose venue in the middle of the alley, has a fashion bazaar scheduled for December 8th and 9th and will host posadas during the season.

Noche Buena is a Mexican brown bock-style beer with seasonal spices only found during the winter time since 1924. The brand was bought by Heineken International in 2014 and got rebranded to “Bohemia Noche Buena” keeping the recipe and seasonal tradition. But local brewers are now offering other options for Mexican Christmas beers. Since 2012, Cervecería Insurgente, one of the leading Tijuana breweries, has released their own “Ale Navideña” called Santa’s Red. Try it or get a bottle in their tap room inside Plaza Fiesta as well as other merch including shirts, hoodies, growlers, and collectible glasses.