Keep those holiday dollars in town 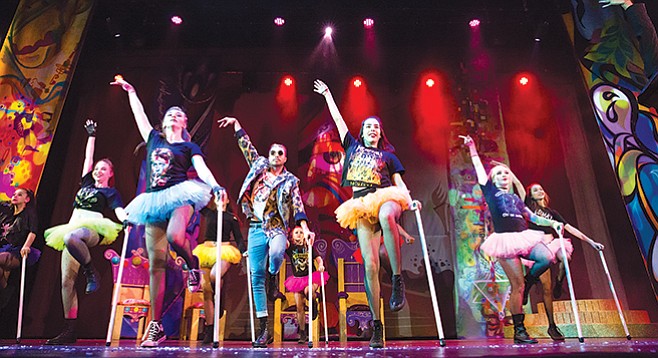 Traditionally, December is a month of buying stuff — whether for yourself, family, friends, coworkers, or whomever else is on that list you’re checking twice. So why not flex your spending power and use those dollar bills to stimulate the local economy and the wallets of fellow San Diegans? There are plenty of local shopping pop-up market events and arts experiences to be had, often occurring simultaneously, in order to keep those holiday dollars in town and to have more than just your credit card bill being the one to make a statement.

Hosted by Por Vida Cafe & San Diego Vintage Co., the monthly Barrio Logan Flea Market just celebrated their first year anniversary this past September. This swap meet features rotating local vendors selling vintage items, jewelry, records, handmade crafts, clothing, art, a variety of food, and more — essentially everything you would want from a swap meet. Past months there were cupcake and vegan pastry vendors present to help fuel the shopping experience. Throw in a great DJ for music, and the fact that it’s family- and pet-friendly, and it becomes something for everyone. Generally held on the second Sunday of the month, this month is no exception. Sunday, December 10th from 10 a.m. to 4 p.m. Free.

Self-described as “the ultimate mash-up of dance genres and theatrical and musical styles blended with a timeless holiday tradition,” San Diego’s Culture Shock dance studio has reimagined the classic tale of The Nutcracker while keeping it appropriate for, and adored by, all audiences. In its fifth year, their version of the story offers something modern and innovative: choreography using dance styles of tap, hip-hop, krump, contemporary, and popping; tapping into a multitude of pop-culture references such as Star Wars and David Bowie’s Labyrinth; and weaving Tchaikovsky’s original score with music from today. Runs January 5th–7th.

Newly opened in July, this family-run boutique outfits the fairy princess dreams for people of all ages and sizes. Specializing in custom hand-made hair accessories and tutus, they also stock Disney character-like costume gowns, superhero cape-and-mask sets, and other fun accessories. Not your run-of-the-mill tutus, these are made with soft layers of high-quality tulle, some with a specialty fabric overlay (think Shopkins, Batman, Star Wars, My Little Pony, etc.). A unicorn headband runs $2 with the most elaborate hair bow being $7. Don’t see what you like in the store? Chances are they can make it for you — or your pet — for way less money than you think.

What a lovely tradition it is to go see a performance of The Nutcracker over the holiday season. This year, try City Ballet of San Diego’s version of this timeless classic. Running annually since 1995, it was awarded “Best Nutcracker in San Diego” by the San Diego Area Dance Alliance. While many Nutcrackers are performed to canned music, here Tchaikovsky’s famous score is performed live by the City Ballet Orchestra during the performances. The show runs December 8th–24th.

Comprising over 50 performers who sing in four-part a cappella harmony, Full Measure has been a staple in the carolers-for-hire scene for over 25 years. Last year, you might’ve seen them rocking around the Christmas tree at the Las Americas Outlets or ringing their hand chimes at multiple breakfast-with-Santa events. Versatility and quality are the keys to longevity here, as some of San Diego’s finest vocal talent are outfitted in one of three different styles of dress to suit their client’s vision — Victorian, modern, or fun formal. If you can’t talk your boss into hiring them for the company’s holiday party, don’t fret; check the website for a listing of their public performances.

Dubbed a “locally curated artisan experience” and occurring biannually, Makers Arcade is essentially a big ol’ arts-and-crafts fair featuring over 100 “regionally local Makers” and happening exactly when you need it the most — in this case, right in time for the holiday buying season. Admission is $5 at the door, which includes live music and access to the photo booth and “make and take” crafts area. There’s even a kids’ area this year and stylized lounge spaces for anyone to take a load off. With craft cocktails, beer, and food trucks on hand, too, it could easily be made into an all-day thing. Saturday, December 9th, from 11 a.m. to 7 p.m.