"It’s a hardship to live but we want to do it." 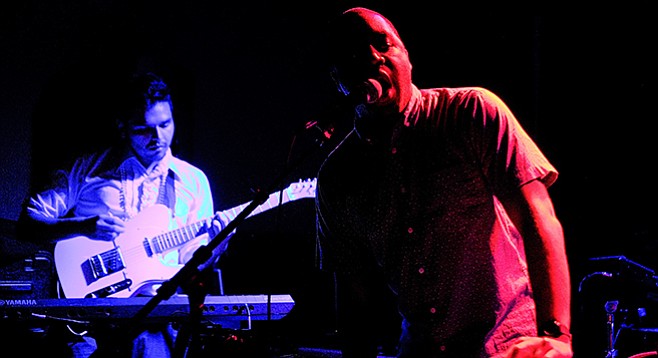 Spooky Cigarette has just wrapped up a full-house set at Space Bar. The show was well-attended and the audience more than enthusiastic, yet frontman Frank Mindingall gives off little more than a sense of calm and possibly bashfulness.

“We’re just doing it to do it,” Frank says as a few bandmates and friends discuss Chicago The Musical in the parking lot. “There’s no hidden agenda.” He lets out a doofy guffaw — hyuh-huh! — that makes me feel like I’ve known him for a thousand years. “If things happen and we’re successful, then fuck yeah. If not, that’s cool, too. I did what I wanted to do and that’s worth something.”

What Frank (who’s played bass with Beaters, Northern Tigers, and Ale Mania, among others) wants to do, it turns out, is gyrate onstage, twist dials on his vocal delay pedal, and occasionally skronk a few lines of trumpet out over his keyboard as the band lurks and lilts its way across the wonky, infectious intersection between no-wave and new-wave.

“This should have been done a year ago,” Frank, a data-entry clerk by day, says of the band, which taps collaborators from the Field Trips collective (Skylar Eppler, Danny Gallo, Jakob McWhinney, and Pepe Gonzales complete the quintet). They’ve recently seen bookings everywhere from a festival in a Baja vineyard to a suicide-prevention benefit in a Rancho San Diego plant nursery.

“Skylar, Frank, and I have actually been in a string of bands together,” says guitarist Jakob, “from Trips to Space Heat to Kooties and, finally, Spooky Cigarette.”

Of all the projects, this is Frank’s baby — the actualization (or at least permutations) of tunes he had written on FruityLoops in high school and shelved for years. I ask him about a chilling darkwave tune they played near the end called “Days in Repented.”

“That one starts off with imagery, space and time themes, but most of the song is about wanting to live long but at the same time being weary about that," says Frank. "There’s this weight and hardship about being a person just thinking about survival. So, ‘I want to get high’ is supposed to be tongue-in-cheek about that: like, I want to be happy and forget about the struggle. Actually, it’s not even about getting high, it’s about getting high in numbers, high in your age. It’s a hardship to live but we want to do it....

“So, a lot of it’s based on these existential themes, like how you’re just living life and there’s shitty things about life so you just do it. ‘Existential Vacuum.’ That song’s based off this book by a psychologist called Viktor Frankl. Half the book’s about his experience in the Holocaust, but the main focus is that you find a purpose in life by stepping outside yourself. So, through all that bullshit he wanted to survive because he had this book, this psychology that he knew would help people. He was surviving for other people.

“So, ‘Existential Vacuum’ is specifically about people doing shit to try to fix that, but it’s not the right shit. They buy shit, they fuck, they have nice jobs, but that’s not going to fix your existential problems. You have to step outside yourself.”

“I love that double entendre of the lyrics, ‘I just get stuff and I throw it in an existential vacuum turned on high,’” says Jakob.

“That’s why I wanted to do Spooky Cigarette,” Frank picks up. “It’s a way to bridge out to all these people. And people have reached out and said they appreciate it after shows.”

“Frank always has the same reaction,” Jakob emulates Frank’s unmistakable laugh, “‘Well, cool!’ It’s always, like, ‘Oh, shucks!’ As soul-baring as Spooky Cigarette has been for Frank, I feel like he still keeps the experience at arm’s length.”