Horton Plaza has gone to seed

Even the Ben & Jerry’s is gone 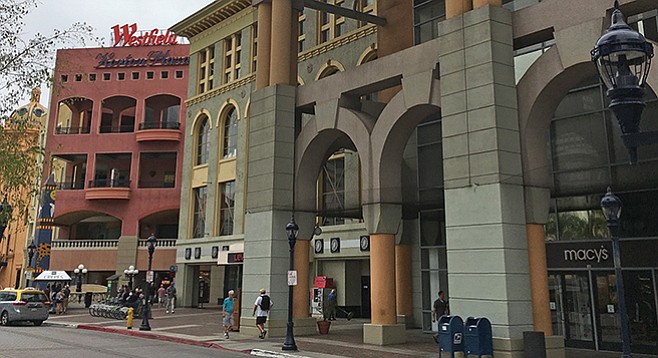 On my first morning in San Diego — July 1995 — I set off walking toward downtown. I was young and I didn’t know anybody, so I went to be where people were. Once there, I saw an escalator rising from street level up into I didn’t know what, so I got on. I wound up at the movie theater atop Horton Plaza for a 10 a.m. showing of Species, a film that taught me that Sir Ben Kingsley was willing to slum it onscreen and that, for a lonely young man, a naked woman can be more soothing than arousing, even if she turns into a murderous alien monster from time to time.

I found an echo of that sentiment in a 1986 Los Angeles Times article from ten years earlier about San Diego’s decline as a Navy town (“all sailors and hookers,” as one local put it). “After you’ve spent four months at sea,” said a petty officer, “you’re going to look for a woman — even if it’s just to talk to.” Or look at. The topless shoeshine on Fifth between F and G was gone by that point, but the Singapore topless bar was still jiggling. And even when I showed up, what is now Urban Outfitters on Fifth was the Kitty Kat adult theater, and F Street Adult Video & Gifts endured on Fourth.

Horton Plaza was, according to the plaque out front, honoring developer Ernest Hahn, “the catalyst for downtown San Diego’s dramatic rebirth.” Gaslamp Quarter project planner Michael Stepner had proposed way back in 1977 to “accomplish historical preservation by making the period flavor of the Gaslamp Era an economic asset,” but the thing got done by installing six blocks’ worth of Italianate architecture by way of Duplos building bricks.

The old sleazy neighborhood is now the Gaslamp Quarter and it's Horton Plaza that’s gone to seed, like some kind of architectural Giving Tree. In 1988, it was the third-most-visited place in San Diego after the zoo and SeaWorld. Now it’s not even the third-most-visited mall. When Max Nash was writing restaurant reviews for the Reader, he favorably reviewed the rooftop Napa Valley Grille, taking particular note of its pork chop. That space is now a comedy club, even the Ben & Jerry’s is gone, and Taco Bell looks like the biggest restaurant. Stalking the mall’s staggered levels, I counted over 30 vacant spaces, their windows papered to hide the emptiness within. “They used to have an FAO Schwartz up there,” said a man to his date. Tenants included a charter school, a dress charity, a hair-and-wig lounge, and a project space for the San Diego Art Institute.

Maybe that’s the future, now that the Kids of Today are shopping online and hanging out there, too. Not remodeling, but re-purposing. A poster declared, “Event Space Available: we have several event spaces throughout the mall, including: rooftop locations with breathtaking views of the downtown sunsets to small intimate spaces overlooking Broadway Circle.” I pictured a three-story rave inside the abandoned Nordstrom, with taco carts parked outside. A place where people are.

Despite all the hype that came out of city government, and especially Pete Wilson when he was mayor, that mall never did rejuvenate downtown. The current residential development is no thanks to the mall, either. Wilson expended far too much time, attention, money and scarce political capital on getting that mall built. In so doing he sold the city's soul to one of the nastiest and greediest developers in So Cal history--and that's saying a lot--Ernie Hahn.

Twenty years ago on a Saturday the mall was an island of retail activity in a sea of indifference. Retail stores on C Street were usually closed on that day; no office workers, no business. So, there was no spillover from the weird mall onto the surrounding streets. Its very reason for being built, supposedly, was to get downtown to come back to life, and it never did that. Heck, the traffic into and out of the mall didn't even keep that uber-fancy retail operation across the street, The Paladion, going during the economic downturn of the early 90's.

More recently, within the past two years, I had occasion to kill some time downtown, and I went into Horton Plaza to get some lunch. What passes for a food court there, a cluster of hole-in-the-wall takeout spots that have little or no seating of their own, does have some communal outdoor tables. While attempting to eat there, I was panhandled six times! Where the heck is security? I saw no sign of anyone who looked like a security agent at all and the homeless and those who wanted to look that way had free run of the mall.

As to whether Westfield will spend a cent on that mall is pure speculation. Why would they when the tenants keep closing? The reason Westfield is refurbishing UTC is that it is/was full and with more tenants lined up seeking space. Malls are on the way out, and UTC is a major exception. We may soon see that only two malls in the county are viable, the aforementioned UTC and Fashion Valley. The rest of them? Meh.

Westfield was under contract to provide lots of entertainment events in the new outdoor space. And there was supposed to be public art: http://www.sandiegoreader.com/news/20... What happened to that? The homeless have moved back into there, too. The whole project, which went way over budget, looks like an expensive disaster now.

...Rooftop locations with breathtaking views of the downtown tents on the sidewalks of Island, 16th Street an Imperial Ave.

This was the creepiest, most disjointed mall I've ever been in. Hated it from the beginnning. (Apparently a lot of people got lost in the parking lot. Used to see security ferrying people up and down to find their cars.)

The place would benefit from a teardown. Make it a park. Downtown doesn't need another building. It needs green space, and to make up for decades of, well, gross.

I was parked there a while back while going to Balboa Theatre. Afterward I had trouble finding the right level in the parking garage, as they don't match the floors in the shopping center. Stupid design, and awful signage.

Jeez dude. Give it a rest.