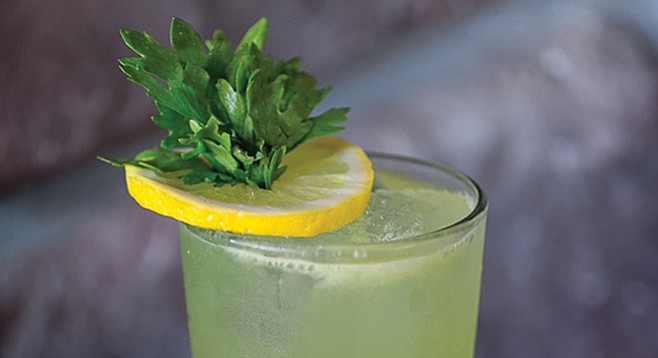 The Stalk Market is Sycamore Den’s newest cocktail, and according to Sycamore bartender Jesse Ross, this liquor-based commodity’s success stems from a portfolio of ingredients — including acid phosphate, the same ingredient soda jerks used to kick up their fountain drinks.

“The phosphate offers a little more acidity without having to increase the citrus taste,” Ross explains. 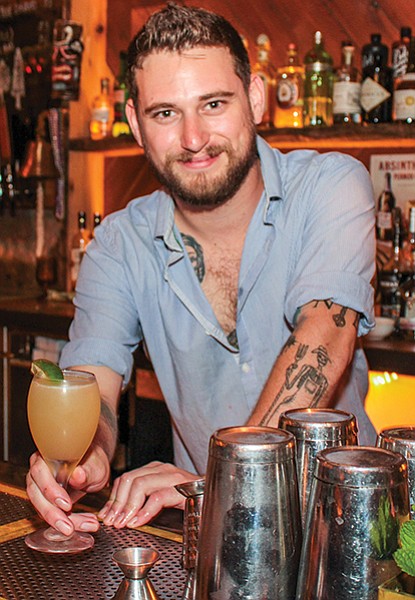 Jesse Ross: “I come from a long line of bartenders who utilize really terrible puns.”

“As I worked on getting the drink right, I wasn’t getting the same effect with lemon juice. When I did the acid phosphate, it twisted things around right.”

“I come from a long line of bartenders who utilize really terrible puns,” he says. “Every time I say the name of this one, I shake my head, look at the floor, and apologize profusely.”

The wordplay took on a life of its own, Ross adds, once the Stalk Market began showing real growth potential.

“When the menu first came out, it wasn’t selling very well, and then we noticed that it slowly but surely picked up,” he says. “So behind the bar we were saying the ‘stalk’ was rising on the cocktail.”

According to Ross, the name’s cringe-worthiness soon gave way to the ingredients’ buzz-worthiness ­— especially the exotically Scandinavian aquavit.

“Aquavit’s been around for a long time, but like absinthe there’s been subpar stuff and exceptional stuff,” he says. “It’s a spirit that hasn’t been utilized much in cocktail culture ­— but slowly and surely you’re seeing aquavit make its way on the scene.”

The byword for aquavit is caraway.

“Juniper is to gin as caraway is to aquavit,” he says. “Some people will taste a little anise, which people typically associate with licorice and so get scared off. But a drink like this is fresh and ripe enough that all those flavors come together. It’s tall, refreshing, and vegetal. It’s cohesive.”

In cocktail tin with ice, pour ingredients, shake, strain into Collins glass with ice, top with club soda, and garnish with lemon wheel and mint sprig.