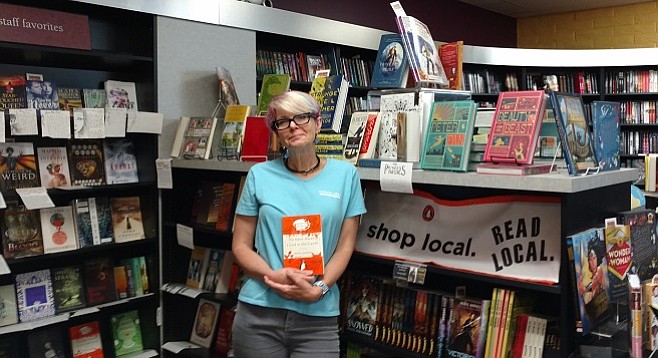 Eat. Sleep. Read. Local. For years these edicts have presented themselves in the form of a bold red-and-white poster gracing the entryway of Mysterious Galaxy, an independent bookshop specializing in science fiction, mystery, fantasy, and suspense fiction.

The store celebrated its 24th year in business a few months ago, and on a Tuesday afternoon in mid-August cofounder and events manager Maryelizabeth Yturralde is making her weekly rounds. Her shop T-shirt repeats the imperatives advertised at the front door, shocks of pink and purple reminiscent of the brightly painted walls (which also feature a healthy dose of lime green) highlight her cropped blond hair.

In an unfinished back room occupied largely by stacks of books and interlocking chairs with memorabilia and office apparatus, Yturralde commandeers the desk of one of her employees and sits to share the tale of her decades-long foray into the book business.

"My book experience dates back to volunteer work I did at the local library in the small Oregon town where I grew up," Yturralde begins. " When I moved to Southern California I worked on and off at B. Dalton back when they ran those 'I'm Books Dalton!' ads, before it became part of the bigger Barnes & Noble corporation."

It was there that she met the cofounder of Mysterious Galaxy.

"My business partner and I kind of have this 'meet cute' story. I was working at the no-longer-existing B. Dalton at Black Mountain Village and Terry Gilman came in once a week because she had a standing date with her kids to get frozen yogurt, and she'd always pick up a book there. I got to know her as a customer while she was working a desktop-publishing job."

When the opportunity to open a store that catered to their particular tastes arose in 1993, the pair, along with third partner Jeff Mariotte, jumped on the chance.

"I actually wanted to name the store 'Martians, Murder, Magic and Mayhem' — Terry and I share a fondness for alliteration, but the initial staff basically told us there was no way they were saying all that every time they picked up the phone," Yturralde says.

The tagline nevertheless appears as subtext to the store's official name on most of its logo manifestations.

After years of facing down challenges to the community bookshop model, Yturralde is hesitant to declare a state of emergency for the industry, as other shops closing locally have done.

"I don't want to make light of the fact that there are a lot of challenges [in being a small bookseller], but I would like to point out that over the last several years more independent bookstores have opened than closed. The dialogue isn't necessarily keeping up with reality.

"First, we were all supposed to be scared of the discount stores like Crown Books," Yturralde continues. "Then it was the superstores — the Bookstars and Barnes & Nobles. There's always been somebody doing something of concern when you're an independent. Maybe it's just the fact that books are available everywhere — big-box retailers or your local gas station."

The numbers bear out her assertions — according to the American Booksellers Association, a trade group for independent shops, membership has grown consistently, with the number of member stores rising from 1651 in 2009 to 2321 this year.

Yturralde doesn't mince words when it comes to the influence of Amazon.

"They're a giant, horrible internet bully," she declares. "They don't want to be your bookseller; they came into the market and were able to leverage their position with books as a loss leader into becoming a much broader purveyor of content. They want to be your everything, to make it easy and effortless to make them the resource for all of your purchases.

"I think one disservice is the portrayal of 'mom and pop' booksellers versus Amazon. A giant internet bully retailer is of concern to everyone, to brick-and-mortar retailers of all stripes."

Still, despite heavy marketing of the company's Kindle e-reader, print remains the preferred medium for most readers to get their books, and Yturralde believes that the role independents play in connecting authors with readers is a large part of their vitality.

"As far as our curatorial role, we retain tremendous influence. It's hard for people to remember, but we made Dan Brown [author of The Da Vinci Code]. Here was a guy with an okay track record — this was something like his third publication, but Da Vinci was a number-one indie pick because independent booksellers were excited about it. It became a very popular item you could find anywhere and everywhere, but we were behind it early on," she continues. "I think the distinction of having a curated section and being able to interact with members of the community who love the genres that we're passionate about has definitely stood us in good stead."

The latest incarnation of the Galaxy, tucked into a strip mall on Balboa Avenue behind a See's candy shop, is the fourth and, Yturralde hopes, the last.

"When we moved here in the end of 2014 it was on a Saturday — we started leaving our previous location at 8 a.m., and we had an author event in-store at two o'clock.

"We started out in Clairemont Square, but after a couple years they literally knocked our building down. After that we relocated to Convoy Street by the Pancake House, where we were very happy. But, for the second time in my bookselling experience, a fish shop opened up next to me. While fresh fish is delightful, the smell of the ice that they pack it in and empty out each day is not. So we moved to Clairemont Mesa Boulevard, where we stayed for 14 years until we outgrew our space there."

The current space is twice as large as the last and employs ten people, many of whom have been around for years.

"Turnover is pretty low," Yturralde says. "The blessing is that people are generally booksellers because it's their passion, it's what they want to be doing."

After ten years spent living in the Arizona desert and managing the shop remotely, Yturralde moved back to San Diego in 2014, about the time of the store's latest expansion. "It was somewhat workable because of the electronic age," she says of her time out of the state. "Working 500 miles away versus five minutes away did have its challenges, especially because I lived in a fairly remote area. Even now, I primarily work from an off-site space because as an event coordinator my primary job is to spend time talking with our publishing partners and authors. It kind of feels unfair to me to try to do it in-store; either I'm not responding to a publicist's phone call — 'Hey, we'd like to send you Mary Shelley [unlikely — the Frankenstein author died in 1851]! That would be awesome, can I call you back?' or I'm with a customer — 'Oh my gosh, let me tell you how much I love Kindred, by Octavia Butler — wait, sorry, I have to take a call…'

"I'm very local now, I live, like, nine blocks away. I don't walk to work as often as I'd like, though, because I'm often carrying a shitload of heavy books."

During the quarter-century the Galaxy has been in business it's developed a devoted following among readers and writers, garnering dozens of five-star reviews from customers across North America who've made a pilgrimage to the shop. Noted science-fiction author and open-source advocate Cory Doctorow pays homage to the store in online editions of his novels.

"We try to be part of our book community," Yturralde says, humbled and, for the first time, at a loss of words when asked about her store's ties to many.

"What's unique about Mysterious Galaxy is the close connection, the friendship we have with our customers," pipes in store manager David Joslin, who's been listening quietly until now at an adjacent desk in the storeroom. "More than half of our customers we know on a first-name basis. They'll come in and it’s, 'Hi, Robert' or ‘Hi, Chris!' If I know them, I'll hand them a book and they'll take it because they know I know them and their tastes. It's really kind of special."

Throughout the year, the store hosts dozens of author meet-and-greet events, writers' workshops, and discussion groups. Despite the store's focus on fiction, exceptions are frequently made for local writers struggling to get a foothold in the industry.

"We've had authors who've written books on sales techniques and other stuff that's not normally going to fit into one of our sections, but we want to be supportive of local writers, especially independently published ones," Yturralde says.

The world's biggest gathering of fiction and fantasy fans, though, means that in retail terms, the Galaxy's Christmas sales season is shifted to July.

"Comic-Con is an interesting exercise in juggling a lot of moving pieces. It's wonderful for us — it's five or six days of incredibly hard work, but it's also a grand party where we're spending time with thousands of our geeky friends," Yturralde continues. "We love it, and frankly it's our Christmas. We do have a strong holiday season and we get a bump from Small Business Saturday, but our scale of holiday sales still isn't as significant as the amount of business we do at Comic-Con."

The weeks leading up to and during the Con are filled with coordinating a host of events, both in the store and on-site at the convention center, where Galaxy workers spend their days shuttling books and promotional materials to authors taking part in discussions all over the city.

One of Yturralde's prouder accomplishments is a recent partnership established with another longtime independent bookseller with a focus on comics and graphic novels, calling it "the perfect storm of things that I aspire to."

"Because Cory Doctorow had been here in May [for the store's 24th birthday celebration], when he came back here in July we partnered with our friends at Comickaze in Liberty Station and he did a reading there. That's the sort of thing I aspire to — it was good to partner [with another independent retailer] and offer a demographic of readers we might not reach an opportunity to interact with Cory.

"Cory had a great time, but he said in the future he'd prepare his readings better for three-minute intervals in which you get drowned out by the passing planes."