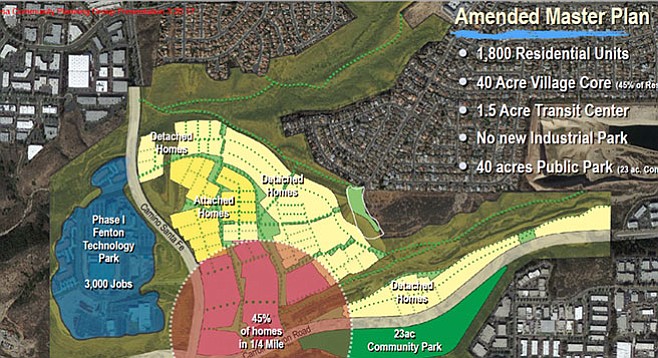 Hanson Aggregates, the San Diego cement giant owned by a giant British-based multinational, has been trying to up its lucrative real estate development game with big changes to Mira Mesa’s Carroll Canyon Master Plan. “The proposed amendment would change the designation of the remaining light industrial/office area south of Carroll Canyon Road to accommodate an increase in residential acreage and park acreage,” per a May 17 report to the city planning commission. “The proposed amendment would allow for 130,000 square feet of retail and office and high density residential units to be located in the mixed-use core.”

Turning the old Carroll Canyon rock quarry into flashy new developments turns out to require lots of costly lobbying juice at city hall. Hanson paid Orange County’s Nuquest Ventures, LLC, $60,000, according to an August 14 disclosure filing. Nuquest president Brian Myers, who has been huddling with the area’s city councilman Chris Cate, is an “advisor and partner” of Hanson’s “on their surplus aggregate mining properties in California and Nevada.”

On June 28, records show, Republican Cate picked up $300 for his 2018 reelection campaign from Myers, a prime player in the controversial development of Orange County’s Great Park in 2013. The same day Myers gave to Cate, Hanson’s San Diego manager Ian Firth kicked in $250. Last year Myers came up with $1050 for the successful reelection bid of mayor Kevin Faulconer, as well as giving $1050 to the failed city-attorney campaign of Faulconer’s fellow Republican Robert Hickey, and $550 for GOP councilman Scott Sherman’s reelection campaign. Vulcan Materials of Birmingham, Alabama, another quarry redeveloper, has given even more to the city’s elected officials, with a total of $90,410 in political money since 2006, city data show.

The biggest recipient, with $35,000, was the GOP Lincoln Club, which distributes its largesse to both candidates and ballot measures. Faulconer’s 2016 reelection campaign took in $4600, and Cate’s first council effort in 2014 got $4400. As of this June 30, Cate’s 2018 campaign has already picked up a total of $1100 from Vulcan employees Michael Linton and Patricia A. Schriebman.

Matt Potter: "Hanson Aggregates, the San Diego cement giant". Hanson Aggregates is a CONCRETE giant not a cement giant. Cement is one of the ingredients in concrete. Concrete is made up of rock, sand cement mixed with water. Cement is a mined and processed powder that is transported in tanker trucks to CONCRETE plants and stored in silos. Sidewalks, tilt-up industrial buildings, driveways, patios etc. are made of CONCRETE.

Alex, the Hanson Aggregates division of parent company Lehign Hanson is a major producer of the rock and sand used to create concrete, but "Lehign Hanson is among the leading producers of bulk cement in North America." Go here for details: http://www.lehighhanson.com/

That is true but the "Hanson" operation that is slated for development was primarily a rock quarry with the majority product being ready mixed concrete.