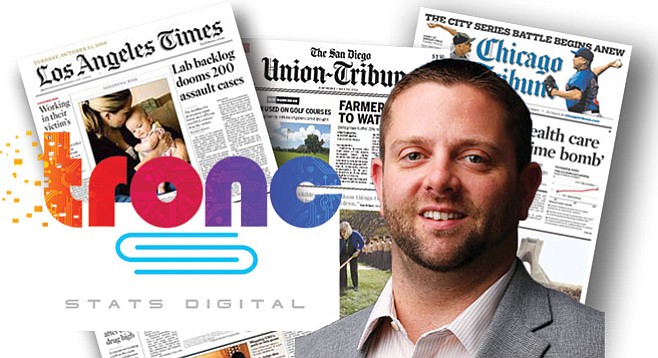 The piece quoted Stats Digital president Zack Watson as saying, “Our data-driven approach to digital marketing has us focused on a client’s key performance metrics, and we optimize campaigns across multiple platforms to achieve the desired return on investment.” Not mentioned was Watson’s ex-role as the U-T’s senior director of digital strategy since February 2016. The piece also omitted the fact that a raft of other staffers listed on the firm’s website are also recent veterans of the newspaper’s advertising department, including Frank Wofford, a U-T research analyst since 2013; U-T advertising digital marketing specialist Elizabeth Sorrell; and Ratmana Insixiengmay, a U-T digital sales planner since 1997, per their LinkedIn profiles.

The mass migration to Stats Digital, a separate tronc operation run out of the U-T’s high-rise downtown headquarters, appears to be a manifestation of January remarks by tronc chief executive Justin C. Dearborn. He told investment analysts that payrolls of the company’s newspapers would continue to shrink, a trend that many fear will ultimately threaten the U-T’s existence as a separate editorial voice from its big sister to the north, the L.A. Times. “Over all, print is attriting,” announced Dearborn. “We are going to attrit with the industry.”

Meantime, U-T publisher and editor Jeff Light has been busy walking back a controversial book promotion the paper emailed to its readers last month. “Basically a screw up,” the paper’s readers representative quoted Light as saying of the online pitch for a compilation of L.A. Times editorials attacking Donald Trump, entitled, “Our Dishonest President.” Added Light, “It’s fine for the L.A. Times to have an editorial opinion, and I’m sure many of their readers might appreciate this sort of rhetoric. But that’s not our approach here.” Light said the email was sent “unwisely” by a tronc corporate marketing group, though he didn’t mention whether he had been consulted before it went out. “Demonizing one side or the other is an ignoble approach,” he concluded.