Capitalizing on ingenuity is lowest of the low 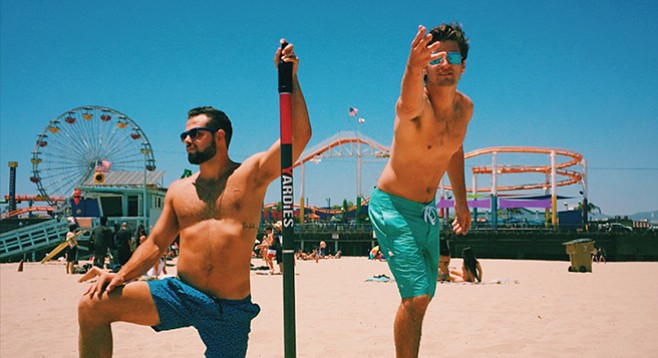 Dear Hipster, I just learned how to play Polish horseshoes this last weekend, and I have to say it’s super fun. Basically, you just hammer some four-foot garden stakes into the ground with about 25 feet between them, balance an empty beer bottle on top of each stake, and then take turns trying to knock the bottle off with a frisbee. Opposing team scores one point if the frisbee hits the ground and two points if the bottle hits the ground. Simple, right? The only thing that bugs me is that name. It’s kinda racist. I’d rather not needlessly mock the Polish people, but I also don’t want to come off as the thought police, telling people what not to say. If you were me, would you protest that usage or let it slide? — Anonymous

Obsessing over the name of a lawn game is probably the hipster, barroom equivalent of spirited debate in the halls of academe. However, from the hipster perspective, we’re dealing with a more or less foregone conclusion here.

When I was a teenage hipster, my group of friends always called beer pong “Beirut,” presumably because explosive firebombing and the cycle of Middle Eastern violence had plagued Lebanon in more-or-less recent memory. These days, I think you’d have a hard time getting people to call the game “Aleppo.” Times change, and people don’t necessarily want to make light of horrific current events.

At the extreme end of the spectrum, people whose memories stretch back to the 1950s and ’60s remember calling little, licorice-flavored candy babies by a name that would now be appropriate only on the Daily Stormer.

So, yeah, sooner or later we will probably all think it’s lame to use “Polish” as a synonym for “stupid,” even in the gentlest fashion, but the only thing to do about it from your perspective is change what you do and know that others will follow in time because, like I said, the point is nearly moot to many of us. frisbeer/beersbee, it is.

What really annoys me, as a hipster, is the fact that you can buy commercial versions of all these DIY lawn games. I Googled “Polish horseshoes” and came up with a handful of $50+ plastic, metal, and otherwise enhanced versions, ready to be shipped to my house. What the shit is this? Last I checked, all these lawn and party games — from bag toss to beer pong, and from beersbee to horsey golf — all bubbled up from the wellspring of human ingenuity as a creative, low-cost response to simple boredom.

Two garden stakes and a couple empty High Life bottles will run you, what, $8? And that’s if you count the cost of the beers! Capitalizing on the ingenuity of the hipsters who came before you is the lowest of the low, and, I believe, constitutes pure anathema to the concept of Good Clean Fun embodied by DIY yard games. Making your own equipment isn’t just half the battle, it’s half the fun. More importantly, material shortages and clever workarounds are how activities evolve and the only way by which new games are birthed into the world of popular entertainment. Call me a hipster fundamentalist if you must, but I say there’s no glory in trying to profit over something cheap and easy that was meant to be enjoyed by all. /Rant.