Penny pinchers and pikers rarely do well at the track

I wouldn't have asked Bob Hope for advice 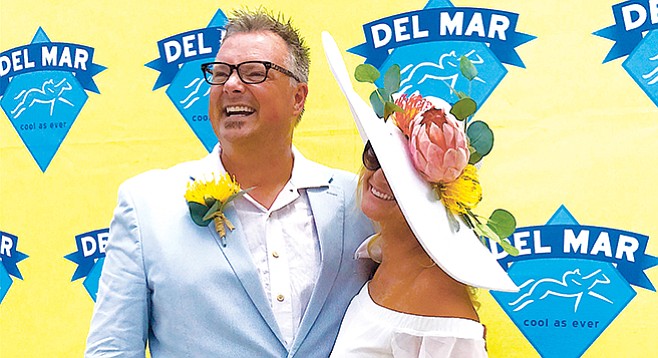 I want to bet on Summer Buddha in the first race and Packin Heat in the third. Call it a lukewarm tip from a half-baked pal back in Jersey. But if his hunches are right and I don’t bet, I’ll be beating myself up for weeks. 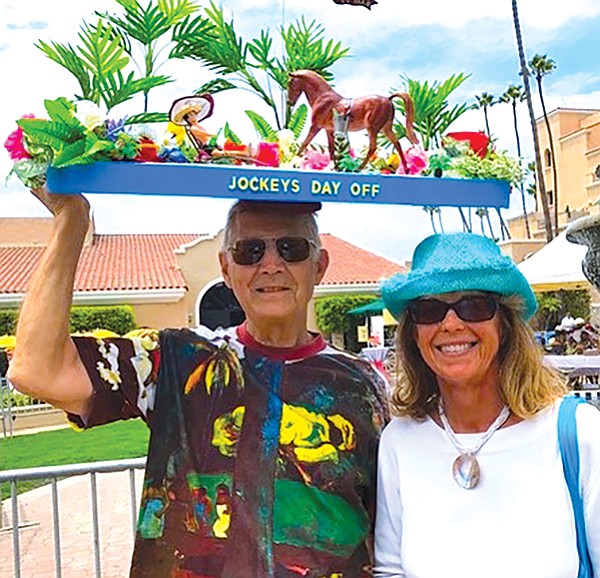 This morning I parked all the way back on South Sierra in Solana Beach and walked the two miles in so I wouldn’t have to pay for parking. But it’s not because I’m a cheapskate. It’s about not being able to spot my jalopy on the dirt at dusk. My eyes are shot. I show my pass at the entrance, the gatekeeper nods, and I’m in the fairgrounds. Four giggling girls in neon hatinators rush by, the short one jabbing my ribs with a wayward elbow. No worries. Wish I were young again and could return to the ’80s. 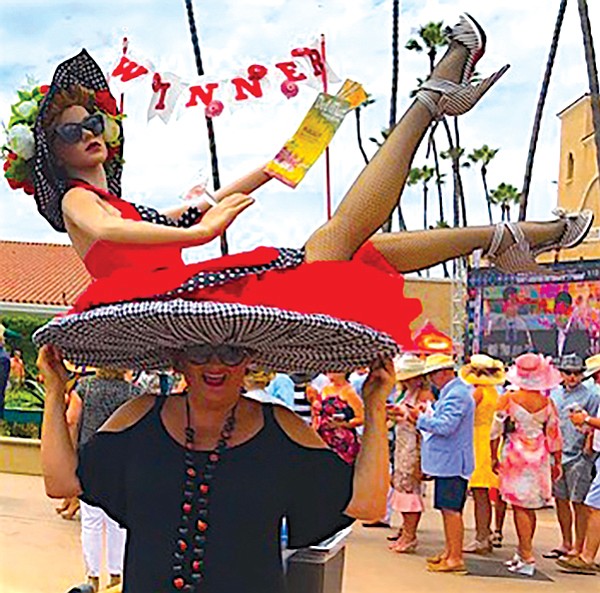 The mannequin hat was so heavy its wearer had to keep a firm hand on it.

I spot the Spanish-style fountain, the palm trees, and the grandstand’s twin towers. Little has changed. I wonder if the toothless man in the pink shirt is still around? He gave the best tips, especially on longshots. I swore he was psychic. Back then, there was a vomit stink in the cheap seats beside the racetrack, and seagulls scrounged for abandoned fries and buns in garbage cans. 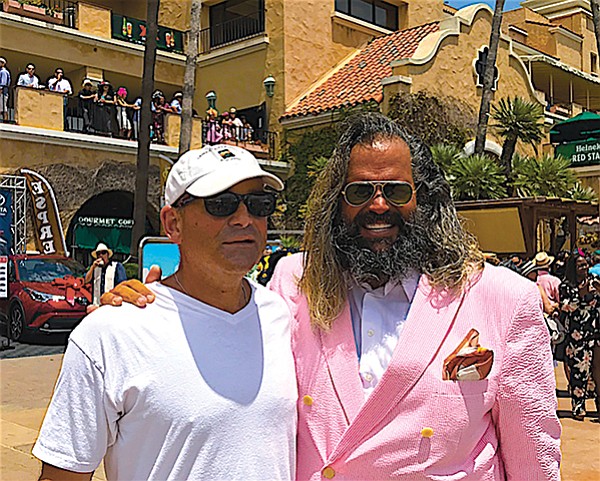 “Been to Woodstock?” I asked the pink-suited hippie. He nodded. “Smoked a doobie with Janis Joplin.”

The infield was off-limits. In my college days, we always bet on horses picked to lose because sure things pay so little. There was this girl who broke up with me for giving her a bum steer. My UCSD buddies and I partied away our winnings at the Fish Market across the street from the track and we even picked up the tab for our loser friends. Then jockey Willie Shoemaker waltzed in with a tall blonde and bought us all a round of drinks after telling us they were naming a street after him up in the hills. He wanted to celebrate. We toasted him and cheered. He blushed. The blonde flashed my pal Malcolm bedroom eyes and Shoemaker refused to sign my napkin. Once we drove to Jake’s and blew our wad in ten minutes on watered-down drinks and overpriced crab cakes. The mayor of Del Mar was there drinking martinis and he had us tossed out for using foul language.

I almost never win big at the track. Women always know the winners, and they’ll get mad as hell if you talk them out of their picks and those picks win. “You bastard,” my girlfriend said.

Whenever I do get on a roll, I consider my winnings expendable and spend every last nickel within 24 hours. Maybe it’s a bad habit. But I’m certain Lady Luck wants you to enjoy the now because she wants to watch all the fun you’ll have. I believe in living for the moment, especially after unexpected scores. The late Frank Sinatra shared this same philosophy.

The only dude I probably wouldn’t have asked for advice was Bob Hope. Hope was supposedly a big tightwad. Penny pinchers and pikers rarely do well at the track because they’re overly worried about losing. You can’t go with a gut instinct if your brain is under the influence of anxiety and fear.

I wander the courtyard looking for changes. No stink of manure. No stench of barf. No scrounging seagulls. Lots of signs with arrows. Signs for everything, from private seats in the Turf Club to the Seaside Cabana to restaurants overlooking the track. I hear the distant beat of techno. People seem to move in circles, as if trapped in an invisible whirlpool. I pull out of the current and bump into a woman wearing a cheesehead festooned with marigolds. “Watch it,” she scolds.

The Plaza de Mexico is mobbed. A gold mushroom hat floats through the crowd. Competing perfumes flavor the air. The local news is out in force, a microphone held by a TV blonde flaunting a green fascinator. Women in hats, skirts, and heels smile for photos with a racetrack logo screen as their backdrop. Mothers pose with daughters. Golden girls with cartwheel hats sip sparkling wine. The “Opening Day Hat Contest” banner looms over the gray fountain. An ebony stallion made of plaster holds a front hoof up as if prancing. A cute mannequin in a red cocktail dress, fishnet stockings, and boudoir cap kicks up her legs on the saucer-shaped hat of her creator. The fountain bubbles. A breeze rolling in off the Pacific carries the aroma of kelp. The one man in the contest balances a jumbo pizza box on his head, now painted ocean-blue with a yellow “Jockey’s Day Off” emblazoned on its side. The top of the box boasts a jockey figurine sprawled on a lounge chair in the middle of a paradise of palms, ferns, and orchids. A toy horse without saddle nibbles a fern.

A bearded hippie with aviator sunglasses and a pink suit checks out the mannequin. “Now I’ve seen everything,” he chuckles. “From San Diego?” I ask.

“L.A., born and bred. But I wouldn’t miss opening day for the world.”

He nods. “Smoked a doobie with Janis Joplin.”

An Asian woman in a red-and-black polka-dot dress and matching headdress flamencos by on stiletto heels. She flips open a polka dot fan and breezes herself while dancing.

“This babe’s got my vote,” says the pink-suited hippie, “hands down.”

I stroll over to a photo backdrop featuring blue racetrack logos on a yellow background. A 40ish couple poses with the screen as their backdrop, as if they’re attending a Hollywood premiere. A yellow protea explodes out of the lapel in the man’s sky-blue jacket and the pink pants make me think of Gatsby. His better half has a white flying-saucer-shaped hat tilting off her head at a rakish angle. Her white camisole drifts over a tan shoulder and her bejeweled bracelet sparkles in the sun. I doubt they’re famous, but most eyes are drawn to the cool ones. Cameras take aim to freeze the moment. Next up is another mother-daughter team, both wearing hats that remind me of what the late Audrey Hepburn wore in Breakfast at Tiffany’s. Then comes a curvy dame in a tight pink skirt holding a glass of white wine. She’s wearing a monstrous peach-basket hat adorned with bunches of fluorescent green chiffon and ribbons of pink silk shaped as roses. The basket-hat babe lifts her glass for the cameras.

I notice a miniature carousel with gold horses rotating on a black sombrero. It must be heavy — the woman’s hands clutch the brim as if she fears it will topple. A girl with a pink-rose print dress has a matching sun hat nesting a family of neon-blue butterflies. Another mother-daughter combo approaches the Hollywood screen. The mom wears a wide-brimmed sailor hat decorated with giant red fabric roses and real yellow roses. Her daughter sports a simple white sun hat with a blue band. Their smiles tell me they’ll be best friends forever.

I get so distracted by the Hollywood of it all that I miss the first race. It’s a good thing, though, because Summer Buddha finished second to last. I follow a river of people over to the winner’s circle, a circle of bright grass surrounded by bars. This is the hangout for the watchers, race-goers who enjoy checking out the winning horses, and jockeys who parade over from the track. A jumbo screen mounted to a panel on the Turf Club roof plays the first race in regular speed and then in slow mo. The screen is flanked by smaller screens, which display the numbers of the horses, jersey colors, and the odds. I order a Del Mar Mule with an extra bourbon shot and gulp it down, feeling guilty for dropping 25 smackers. Were drinks always this high? I think beers were only a few bucks. Sometimes you got free pretzels and popcorn if you small-talked the vendors. When I tried flirting with the ice cream woman she told me to scram before she whistled for Big Tony.

I polish off my mule and stumble through the watchers before squeezing against a railing meant to keep the watchers out. I see a jockey with a white helmet and a mint jersey with gray diamonds. He taps a whip against an open palm during his interview. The winning horse grazes on the bright grass in the circle, oblivious of the money he’s made and the adoring gaze of the crowd. 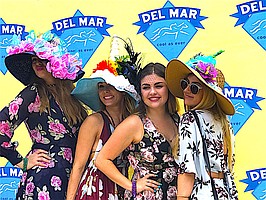 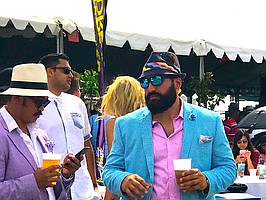 Betting a Hunch by Kirby Wright