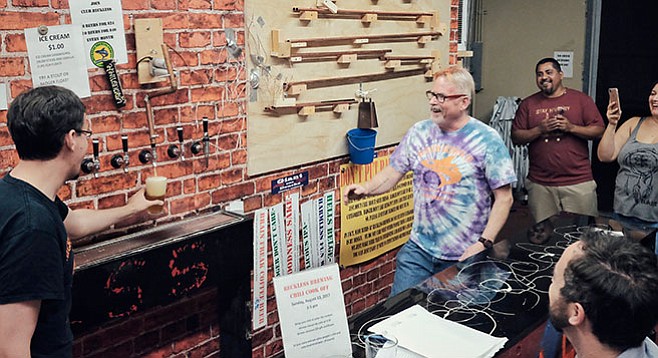 A metal ball rolls down a ramp, launching an RC car into a series of homemade 2˝x4˝ dominoes. Clack, clack, slam! A stuffed bunny hangs from a noose, a baseball glove drops, and a jug fills with water. A suspenseful pause, then, zoom! A racecar rockets down a track, Batman ziplines across the bar, a basketball plops into a bucket, and nothing happens. “Oh, shit,” says Dave. He pivots a toy golf club, releasing a pinball down a copper ramp, completing a circuit that sets off a fallout siren and powers a motor, pulling open a tap. A pint of Golden Boy IPA spills over as the crowd cheers.

It’s the debut of Reckless Brewing Company’s homespun Rube Goldberg machine after an evening of cock-themed trivia at their new tasting room. The brewery started in Mira Mesa in 2011 as Wet ‘N Reckless Brewing, drawing fire from local brewstergensia for ostensibly promoting an activity from which the industry has spent considerable resources attempting to distance itself. Flames from a welding accident brought the brewery down in 2012. Shedding half the name and a 50 percent business partner, owner/brewer Dave Hyndman (a former Marine and biotechnician) reopened in Miramar in 2014 and, four months ago, expanded two doors down into a taproom.

I’ve always appreciated beer’s Dionysian aspects more than the Apollonian, and Reckless is my bed buddy in this philosophy, priding themselves on slaughtering sacred cows and the expectations of stuffy aficionados in the process. In lieu of guideline-approved brews, Reckless trades classification for playful improvisation and irreverent names: Hard Pour Corn, Crazy Stupid Bitch (“Amber in color and profoundly bitter. You won’t understand why you keep coming back for more.”), Badger Don’t Care. Meanwhile, their DIY ethos comes across in spray-painted and Pollock-splattered plywood bar-tops reminiscent of Sonic Youth’s Evol album cover. It feels like something your precocious punk friends pulled together for kicks, and now we all get to play in it.

To be clear, Reckless isn’t pandering to anybody, except maybe other big kids who never grew out of building forts, nachos, and weenie jokes. Every time I come here, I end up in conversations with off-the-clock genomics wizards and wistful robotics programmers, chatting away like how you’d picture an old Irish pub but in the future with free popcorn.

Truth is, Reckless isn’t a respectable bar. It’s what a bar should be — whatever the hell it wants.

Parking: In Reckless lot across the street from Ballast Point.

Events: Trivia every second and fourth Thursday at 6:30 p.m. Winning team gets a pint from the Rube Goldberg machine.

Corrections for the record: Dave's 50% partner split much earlier than the continuity of the story suggests and the cause of the fire was never officially determined.