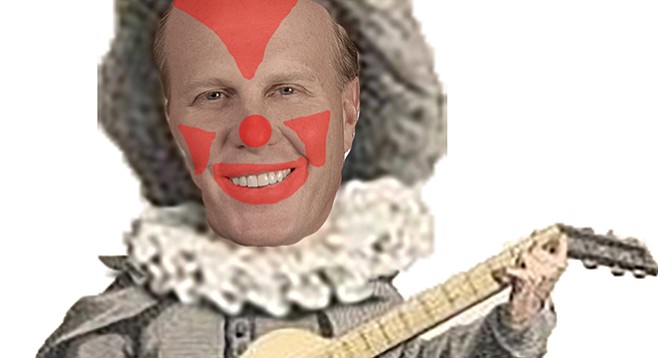 While Donald Trump has made headlines with turmoil in his presidential briefing room, San Diego mayor Kevin Faulconer — seeking to recover face following a rough six months of political setbacks — is taking to the city’s help-wanted web page in search of a new press aide.

“The Deputy Press Secretary position performs communications-related work on behalf of the Mayor’s Office, including writing speeches, press materials and social media posts; communicating with and responding to questions from media; and performing other communication-related duties as assigned,” says the August 3 job posting. Besides a bachelor’s degree in “Communications” or public administration, the successful candidate will have “two years of full-time, progressively responsible professional experience that demonstrates your ability at providing communications, outreach, public relations, marketing, and/or other relevant public service support.”

Talents should include “comprehensive understanding of the principles and practices of public and media relations, including substantial knowledge of the production and dissemination of public relations or public information programs involving social media, audio, visual, or print medium, and related laws, policies, and procedures.”

Then comes a Solomon-like command for the new hand, who must be “highly ethical and objective, with the ability to navigate in a political environment without being political.” Faulconer’s administration has become famous for its heavy-handed politics, including June’s dust-up over the fate of mayoral-favored SoccerCity, during which he slashed funds for the pet projects of Democrats who voted against putting the project on the November ballot.

Following that debacle, chief of staff Stephen Puetz — who had been doing political consulting on the side for the mayor’s 2016 reelection campaign, the Greater San Diego Chamber of Commerce, and county Republicans — departed city employment following revelations of his marriage at the posh bayfront digs of Faulconer campaign donor Morgan Dene Oliver.

Puetz was replaced by longtime Republican aide and chamber of commerce lobbyist Aimee Faucett, for years a political intimate of both Faulconer and chamber honcho and GOP ex-mayor Jerry Sanders. She has been rearranging the mayoral deck chairs in an effort to rehabilitate Faulconer’s policy agenda, including SoccerCity and a foundering hotel-room tax hike proposal. Faulconer’s current PR crew includes chief Craig Gustafson, who came aboard in 2014 after a stint as a reporter for the Union-Tribune, then owned by Republican kingpin Douglas Manchester, and deputy press secretary Christina Chadwick, the wife of the mayor’s chief operating officer Scott Chadwick. She moved into that gig in September of last year from a position as vice president of communications at the Downtown San Diego Partnership as a registered business lobbyist.

Among other previous jobs, Chadwick was a press aide to then-mayor Sanders for three years from 2007 to 2010 before decamping to the state Assembly office of Republican Nathan Fletcher, now running as a big-labor Democrat for county supervisor.

Meanwhile, lobbyist Tom Shepard, onetime aide to fallen mayor Roger Hedgecock, has done well by the SoccerCity controversy, being paid $41,000 in the second quarter of this year, according to an August 2 disclosure, by Public Land, Public Vote.

The group was bankrolled by Sudberry Properties and H.G. Fenton Company to stymie the Faulconer-favored plan by postponing a public vote until November of next year. Tom Sudberry, Jane Sudberry, aide Marco Sessa, and Chelsea Sessa came up with a total of $4100 in campaign contributions, spread among Democratic councilwoman Myrtle Cole, her Republican colleagues Chris Cate and Lorie Zapf, and Democratic city attorney Mara Elliott during the second quarter of this year, per lobbying reports.

What they want is a spin doctor.

I believe the term they now prefer is "twist physician"

Too bad politicians don't try something as simple and clear as the truth. Oh, not their truth, but "the" truth and the whole truth. Is it really too much to ask?

Per Transparent California, Craig Gustafson was paid $118,138.00 in total pay & benefits in 2016. So what is he being paid to do, if a new deputy press secretary will be doing most of the PR grunt work? Meanwhile, the city's Communications Dept. head, Katie Keach, pulled down $153,376.00 in total pay & benefits in 2016. So taxpayers are footing the bill for TWO upper-level city PR chiefs, when one would be sufficient. Something stinks in Enron-by-the-Bay (besides TJ sewage).