Why slow and low cooking is worth the wait 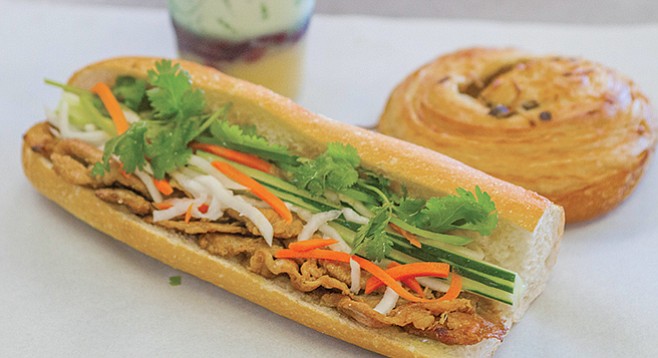 You won’t find a better sandwich for $3.75 than you will among the bánh mì of this low-key Vietnamese deli counter. Bánh mì literally translates as “bread,” and Paris Bakery does well to live up to its French boulangerie inspiration. Ten-inch baguettes emerge from a walk-in oven, delivering warm bread for sandwiches topped with jalapeño, cilantro, mayo, carrots, pickled daikon radish, and protein choices including seven takes on pork. Start with the bánh mì lạp xưởng (sausage and scrambled egg), or the bánh mì ba chi (pork belly with pâté in place of mayonnaise). It’s tough to finish two.

Brad Cooper’s joint has won over the hearts and minds of many a smoked-meat fan, and Coop’s has my vote for best BBQ in the county. Anything coming out of the casual eatery’s smoker will taste great slathered with a complimentary side of thick, brown house BBQ sauce. However, none of the dishes need it, as the smoke and seasoning are enough to attract regulars willing to wait 45 minutes to more than an hour for decadent, tender brisket, jerk chicken, hot links, or spare ribs. Consider those ribs a bucket-list item, but start with the pulled pork; it perfectly illustrates why slow and low cooking is worth the wait.

Given how labor-intensive making tamales can be, it’s amazing you can find them for $2.15 apiece. But that’s how it goes at Ancira, where handmade, non-GMO corn tamales feature ten fillings. They’ll sell you a hundred for $189 if you’re so inclined. Personally, I’m satisfied to stuff myself with a mere five or six at a time, particularly the chicken, pork, and picadillo (stewed beef with peas and carrots). I’m also weirdly partial to the bean-and-cheese, and pairing the pineapple tamal with the chicharrón, which is stuffed with rehydrated pork rind in salsa verde. Point is, an abundance of delicious options makes this place special and, frankly, these succulent masa-bound treats should cost more than they do.

Upscale wood-fire cooking has been trending in food-fashionable cities such as Portland, Los Angeles, and New York, but I never expected to find it in Carlsbad Village. Since opening last fall, this spacious and campy indoor-outdoor spot has packed in North County foodies with terrific roasted fish, grilled steaks, and charcoal-infused cocktails. It’s also garnered an unlikely reputation for firing up especially tasty vegetables, in particular the roasted broccoli, which boasts crispy florets and oh-so-tender stalks elevated by candied peanuts and a savory Middle Eastern ​sauce. At first glance, I worried the tables were placed too close together, but after bonding over the delicate oiliness of the branzino with table neighbors on both sides, I realized social eating IRL is more fun than Instagram.

The most off-putting restaurant name in the county represents one of the most unique and enterprising dining experiences anywhere. Chef Davin Waite’s hands never stop moving behind his “unorthodox” sushi bar, plying his traditional training with bouts of creativity never dreamt of by conservative sushi chefs. Sustainable sourcing practices inspire unlikely pairings of seasonal fruit and prized sashimi; a constantly evolving mix of deconstructed produce; and fish cuts served raw, fried, fermented, smoked, or scorched with a blowtorch. Order omakase for guided courses veering from proper edomae to experiments featuring anything from tangerine oil to beet relish. With endless exploration at work, the experience may prove inconsistent, but the hits will be sublime and the misses likely to include dishes few others on the planet can claim to have tried.

Someday, I hope to have fully explored the unfathomably broad spectrum of traditions we Mericans lump under the single term “Chinese” cuisine. This new addition to the Convoy Street landscape should help. It employs three chefs who bring with them varied culinary specialties — southern, barbecue, and northern styles — and a vow not to Americanize their recipes. Consequently, the endless menu offers fried, grilled, stewed, steamed, and hot-pot dishes featuring fish, chicken, beef, lamb, pork, and myriad vegetables including chilies, eggplant, and lotus root. As a starting point, go for the restaurant’s delectable top draw: a from-scratch noodle dish pairing slightly sour fermented cabbage with rich pork belly. Then make your way through a hundred other dishes before trying the fish over pork intestines.

South Park couldn’t contain the city’s love affair with Italian import Buona Forchetta. For four years it turned a sleepy neighborhood street corner into a bustling urban destination for people thronging for its homemade pastas and wood-fired pizzas. Finally, this new Liberty Station location opened in March to take the pressure off its original property; the same food livens up a much larger space, with courtyard dining and the quirk of a vintage red Fiat convertible configured into a two-person booth. Nothing disappoints, but the restaurant’s simplest dishes prove among its best, such as a Margherita pizza topped with little more than basil and mozzarella, allowing the sumptuous tomato sauce and charred crust to make it sensational. Word has it, Encinitas gets the next expansion.

Finding great baba ganoush in San Diego has become something of an unhealthy obsession of mine; except, of course, that eating eggplant is actually quite healthy. Years of searching turned up my favorite at Aladdin Café. While it shares a name with a related Hillcrest restaurant, the two separated more than a decade ago, and dipping warm pita into this one’s smokey, garlicky, sesame, and olive-oily goodness proves it’s worth heading to the ’burbs for this Aladdin’s superior dedication to quality fare. Its Mediterranean menu employs healthy ingredients, aromatic seasoning, and impeccable preparation throughout, and while succulent lamb, chicken, and gyro meats ably satisfy carnivorous cravings, there’s enough joy to be had without them that vegetarians in particular should take note.