A slice of Chicago 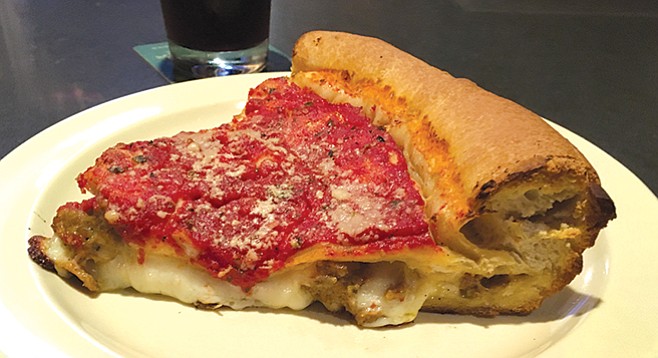 You don’t “grab a slice,” you order it and then settle in. Check your phone. Read a novella. There is no getting around the time it takes until — as the Regents Pizzeria reheating instructions put it — “the cheese is re-animated.” No one of these is “best”; there are few enough that there is no need for that sort of thing. What they are is different, despite their common form and topping (sausage).

Slice: $4.31. Besides pizza, Chicago is famous for pretzels, and durned if you don’t pick up a hint of that in the crust here: slightly stiff, even more slightly bitter. This is not a criticism: the bready crust, with its even, aerated consistency throughout, is the big deal here. It gets support from a smattering of sauce showing good acidic tang, chewy (and gently salty) cheese, and wonderfully porky sausage.

Slice: $5.25. So much cheese — buttery, stringy, weighty — between those two layers of dough. Great flowing gobs of cheese, studded with great gobs of sausage — seriously big chunks, with a correspondingly big grind, and the most sweet-fat flavor in the meat of all those tried. Sauce up top is plentiful and roasty but unexceptional. What is exceptional is the crust down below, blessed with an ironclad crispness that bears its cheesy load with ease. Yes, it explodes into a mini-loaf of supermarket Italian bread at the edge, but by then its work is finished.

Slice: $3.75. They bake a couple of deep-dishes for slices each day and that’s it, so maybe call ahead. And even so, you run the risk of time taking its toll. Fresh out of the oven, Chicago Bros. crust is a crisp pastry marvel, practically snapping under your teeth as you bite down, but showing a becoming flakiness at the edge. A dinnertime slice may show a touch of sog in places, the generous layer of gooey cheese having its way. Sauce is sweetish, sausage is spongy but plentiful.

Slice: $4.25. It says it right there on the sign: “Radical pizza, made with fresh local herbs.” “This is not your Establishment Midwest deep-dish pizza, okay, man? We’ll put one lonely sausage chunk on top of the sauce as a distraction and embed the rest below, like an underground movement. We’ll back off the cheese and load up the sauce with diced tomatoes and fresh basil, like some kind of Italian salsa. And we’ll put it all on a pastry crust, the kind you might expect to find under a spinach quiche.” Not that there’s anything wrong with that.

Slice: no slices here, but a six-inch personal deep-dish one-topping is $13. (It’s more like two-personal.) Thick rounds of dense, complicated, fennelly sausage, curled and crisped by the oven’s heat. Cheese is more creamy than buttery, creamy and thick. The sauce has a dark, tomato-paste intensity to stand against the relatively heavy dose of oregano in play. It’s good, but what’s great is the cornmeal-dusted crust. More than any of the others, it manages that delicate balance of firm but tender, chewy but not tough — though it does get overwhelmed at the pie’s center.

Lefty's is the real deal if you like Chicago style: friendly people as well. Regent's is an OPEC pizza-full of grease. Avoid Berkeley delivery: they "forget" to inform you that they deliver by bicycle, it takes nearly two hours to get to your home and your pizza is a pile of cheese and dough resembling the makings of a pie but not an edible pizza.