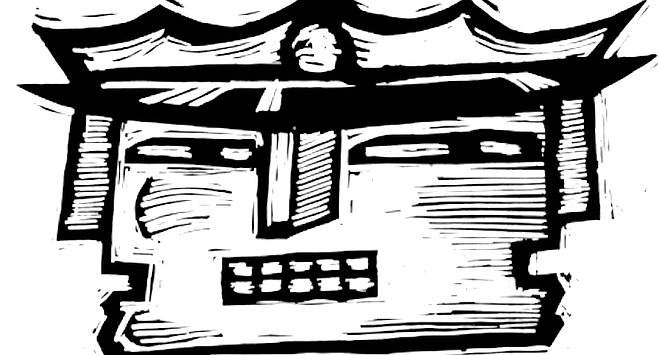 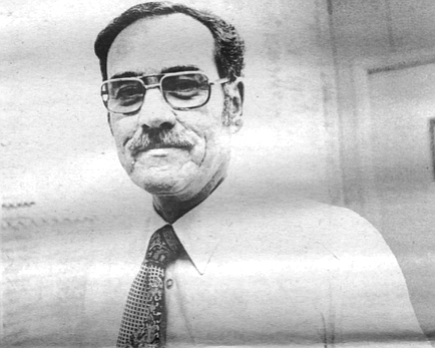 The coroner’s longest day on the job was, of course. September 25. 1978, the day of PSA Flight 182. When the airliner crashed at 9:04 that morning. Stark was in his office, finishing up his usual paperwork. More than fifty ambulances responded to the crash, but it took authorities about twenty minutes to decide there were no survivors, so it wasn’t until 9:24 a.m. that Stark learned that he was suddenly the busiest man in San Diego. 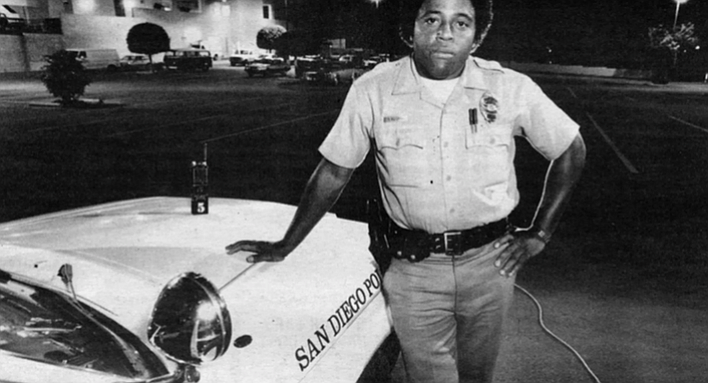 Dan Hawkins: ‘‘Finally the driver got nervous and started looking around."

The Guns of San Diego

“My wife is a police officer, too. One night up on Market Street she saw this guy lying on the sidewalk, having a heart attack. She called the paramedics. When I showed up, I said, ‘Oh, that’s Reverend So-and-so. He’s got a church not far from here.’ The guy died at the hospital, but when they took his pants off they found the reverend was carrying a loaded .38 in his pocket.” 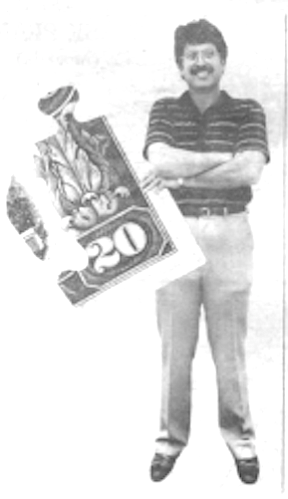 Balistreri can estimate the value of a dumpster’s contents by standing downwind from it.

Balistreri has fond memories of the Jack in the Box trash. “They have really beautiful trash. It’s about fifty percent cardboard, about twenty percent white paper, and a little aluminum. I loved their trash. I could make money with their trash.” Not only was he making money, he was taking a business that is often cited as the worst example of waste in the packaging of consumer goods — the fast-food business.

I saw this mangled bicycle and a crumpled figure lying on the side of the mad. We jumped out and ran over to the guy. According to witnesses, he had been walking his bike along the side of the road when someone hit him. As he fell, another car hit him, and then another car hit him, too. This guy was run over by three different cars, and not one driver bothered to stop. 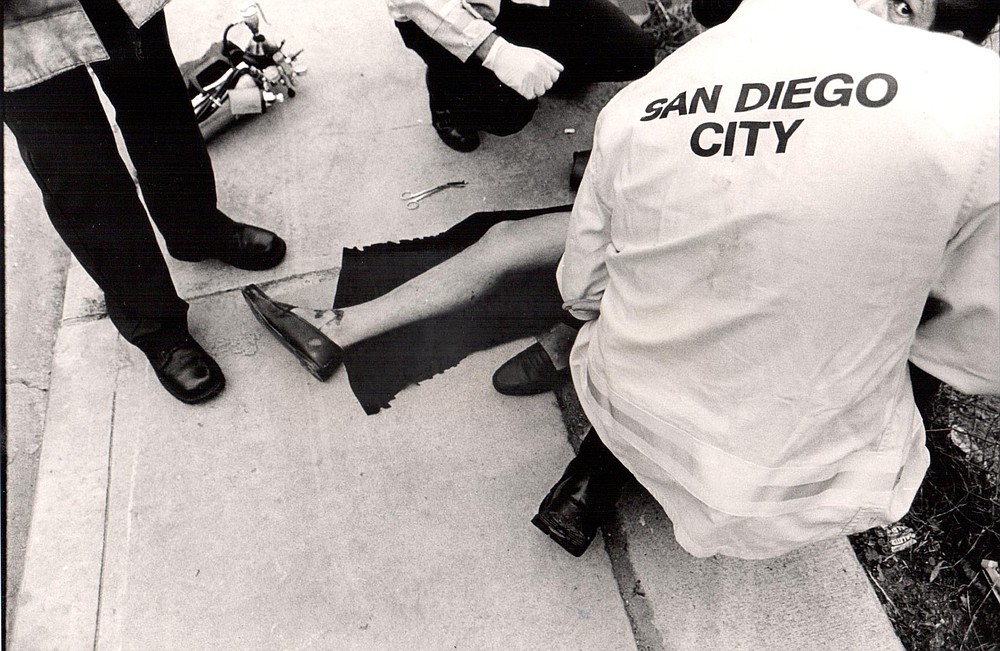 Moped accident. Because there are only 17 paramedic units compared to the 40 fire stations in the city of San Diego, firefighters almost always arrive on the medical scene first.

The Men on Engine 12

After the medics lift the young guy from the stretcher to a metal bed, Harris tries to calm him. The curses intensify. People peek out of doors, around curtains. Every face is turned his way, staring, as if the volume of his voice has caught them, holding them until something pops. A nurse rushes by me. She is blond, short, and tough, wearing a lab coat over her own clothes. "I won’t have this filth.” 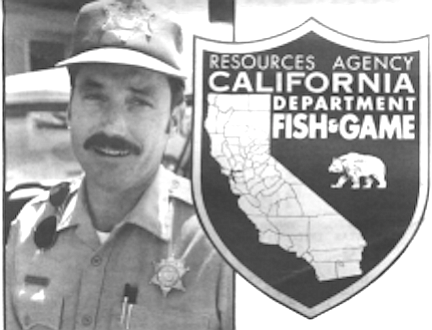 Bob Turner: “I’m not going to tell you my personal feelings about trapping."

"A gray fox is a small animal, so usually the trap breaks their leg bones, and the only thing holding them in the trap is the skin that gets pinched between the bones,” he says. "You leave a fox in that trap for very long, he’ll pull or chew himself out and leave his leg in the trap. Bobcats will thrash around a bit but usually quiet down and huddle up after they’re trapped.” 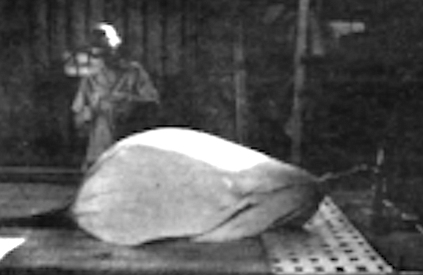 Inflating weather balloon. The flesh-covered balloon is made out of neoprene, a type of latex, and dusted with talc.

800 people around the world send balloons into the sky. At 3:30 p.m. Pacific Daylight Time in San Diego, a technician begins balloon preparation for a 0000 launch. Surrounded by computer equipment on Kearny Villa Road, he checks out and loads the battery-powered radiosonde that will send back weather information. He lays out an eight-foot-long balloon and attaches its tip to a gas jet, which is hooked in turn to one of many canisters of hydrogen. 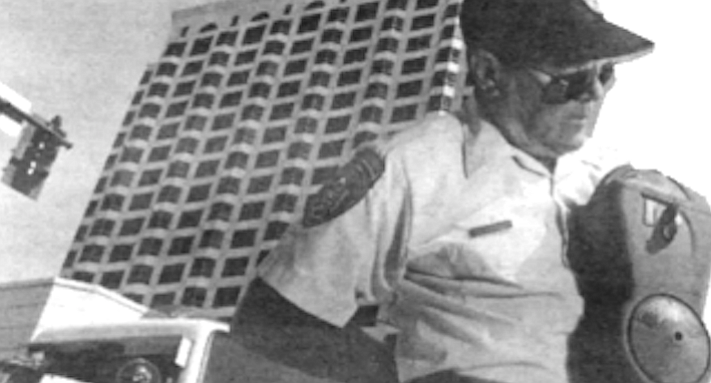 "People don’t think, they don’t bother to read the sign, so they put four or five quarters into the slot thinking it will be good for an hour when they only have 30 minutes.”

“Business is down, not as many people working, more parking garages. You walk around and you’ll see that even the parking lots aren’t full.. And fines have gone up, it costs more for meters; people don’t have as much money, so they don’t take a chance, play the games they used to play. Used to be it was a game. You come by and mark the tire; later, you see them out there rubbing it off.” 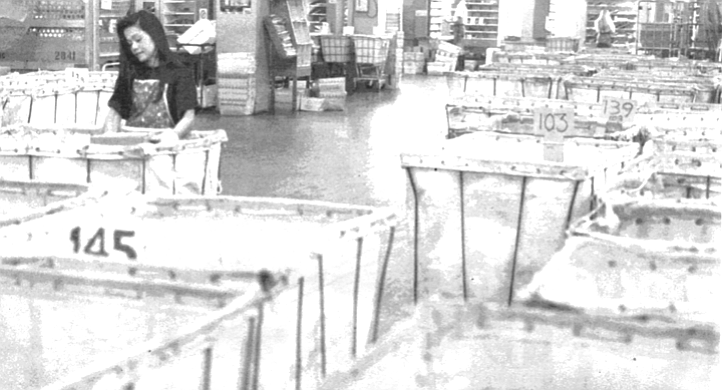 Downtown post office. What is it like to be part of the largest civilian work force in the United States?

As John starts across the lawn toward the mailbox, the dog hops up, barks, trots over to him, and bites him on the calf, breaking the skin but drawing no blood. He turns to me smiling and says, “I guess he does have teeth.” Letter carriers are required by post office policy to report all dog bites, so we make our way back to the Jeep, return to the store, and call John’s manager.

We pull up to a tin garage. Inside, a grizzled-looking man with long white hair framing his bald skull is listening to a rock station with another male friend, who's sitting in a chair. A yellow hot-rod truck is on blocks, looking years away from completion. The older man calls out to Smith, using his first name. When Smith asks what's wrong, he says, "They left the goddamn gate open again! This is private property!”