Do growlers count as open containers?

Law-enforcement agencies weigh in on a commenter's question 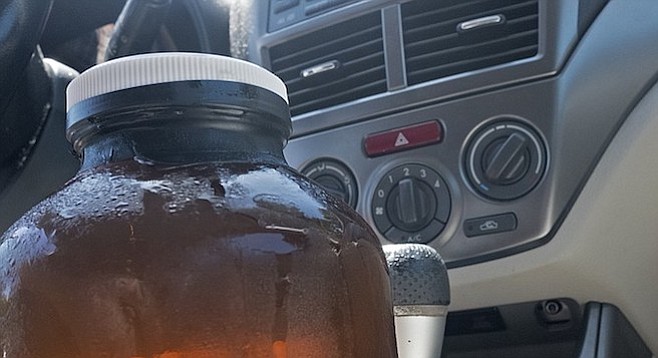 Following a recent story I wrote about the growler concept taking hold at an urban winery, a commenter asked whether filled growlers can be considered open containers during a traffic stop.

Good question. I posed it to local authorities to get a better understanding of how the state's open-container law might be enforced.

Specifically, California vehicle code section 23225 calls for a citation to be issued to anyone driving with "any bottle, can, or other receptacle containing any alcoholic beverage that has been opened, or a seal broken, or the contents of which have been partially removed, unless the container is kept in the trunk of the vehicle."

Basically, if an open container is anywhere within reach of the driver or passengers — including in the glove box — the law says you get a ticket. However, because growlers are designed to be reusable, even a full growler could be considered to have been open, or have a broken seal.

According to the San Diego district attorney's office, only 101 defendants have been charged with open-container violations in the city of San Diego since the beginning of 2014. Of those, 70 percent were concurrent with a DUI charge, meaning 30 percent were sober drivers in possession of open containers; the DA does not keep records on whether any of those charges involved growlers.

California Highway Patrol public information officer Ray Payton wasn't aware of any statewide policy with regard to growlers. "Sometimes the law has to catch up," he said. Payton further suggested that, "If the officer can prove you are heading back from a brewery and coming home," and "as long as [the growler is] completely full and still sealed the way they seal it [at the brewery], you should be okay…as long as you haven't been drinking."

For the San Diego County Sheriff’s Department, Ryan Keim said it “would be a judgment call on the police officer's part." He said most sheriff’s deputies would likely consider "the totality of the circumstances" before issuing a citation, so being able to cooperatively show that the growler has not been opened may be enough to avoid a citation. "That's how we deal with most things," he said. “We look at the whole picture."

Hernandez, who owns a few growlers himself, offered the best advice: "Carry a roll of electrical tape. When you get your growler filled, tape the top and seal the growler yourself. Place the growler in the back seat or trunk of your car. Now that you’ve brought this to my attention, this is what I’m going to do."

The solution seems simple to me. Just put it in the trunk of the car. If your car doesn't have a trunk, such as a pickup, put it as far out of reach as possible. A totally full growler with the cap tightly cinched down is about as "sealed" as you can get.

Ian, your attempt at public service might have the opposite effect. Your fundamental error is asking a cop the intricacies of a law that he will never be arrested for. No cop gets arrested for open container - nor DUI, for that matter - unless there is an accident. Even then, there are many exceptions. "Hogwash!", you say? This week there is a video going viral of a cop assaulting and kidnapping an on-duty Emergency Room Nurse, while three other cops stand by and watch. What makes you imagine the cops who find this acceptable, when witnesses abound, will finally be moved to act when they find one of their buddies on the side of the road with a half full growler? Billy Hernandez of the SDPD even confirms that cops have complete disregard for the law. The law states that containers with a broken seal or, lacking a seal, with contents removed, will be stored in the trunk. Billy says he has no problem putting these items in the back seat of his car, a clear violation. "But how do I prevent getting arrested?" That's the point, isn't it. The truth is, just like the ER Nurse who broke no law, you can't. Billy Hernandez even confirms this. He says, even if police know that your growler has had no contents removed, they can "technically" arrest you. Since a citation is a sworn statement, Billy is admitting that the police can lie. And there is nothing you or I or anyone else can do about that.