“The last thing they want is to hear a jack hammer all day.” 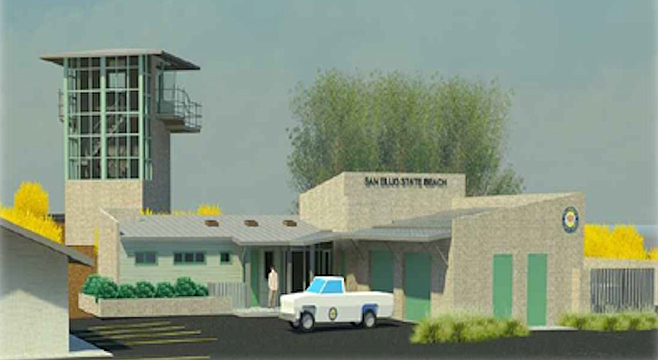 Since the 1970s, Mira Mesa’s Dave Timms has been camping for a week, once a year at the San Elijo State Beach campground. Recently when he tried to make his usual reservation, he found his regular site would not be available later this fall. Nor perhaps into the 2018 spring months. “We just gave up for this year,” said Timms. 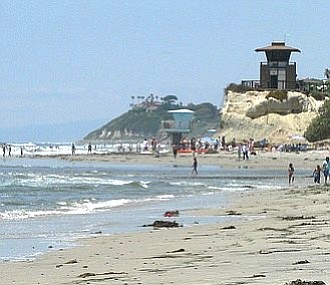 The project replaces the 1960s-built lifeguard tower that was taken down in late 2014 due to threatening bluff erosion.

A major portion of the popular campground, spaces 40 – 93, will be closed as of September 5 for major trenching and construction for Cardiff by the Sea’s new lifeguard tower and safety center. The five-million dollar project won’t be fully completed until July 2019.

“We want to have the maximum number of campsites available to the public,” said project manager Lisa Urbach. The park plans to add individual sites back into the reservation system after construction in those areas is clearly competed.

“The last thing our campers want is to hear a jack hammer all day,” said Urbach. “And we don’t want to have to cancel reservations due to construction delays.” Campers are advised to check the reservation web site frequently for opened up sites.

The project replaces the 1960s-built lifeguard tower that was taken down in late 2014 due to threatening bluff erosion. The lifeguard headquarters will improve response times, access to medical aid, and protect the safety of visitors with views along the entire Cardiff beach from Seaside to Swami’s, say the promoters. It will serve a command center for the state’s two other North County jurisdictions, Torrey Pines and Carlsbad’s state beaches.

During the construction, the campground store and the Bull Taco restaurant will stay open. However, campers making future reservations will now experience another big change, this one positive.

All California state parks and campgrounds are now on a new reservation system. Previously handled for decades by a private firm, ReseveAmerica, all reservations are now made through a new firm, ReserveCalifornia.

The new system was launched without incident statewide on August 1.

Once fully up and running, the new system will allow expanded opportunities for campers and locals to make on-site reservations at a kiosk in the campground, or expanded services like having firewood, ice, or rental surfboards delivered upon arrival.