Surprised by ceviche in City Heights 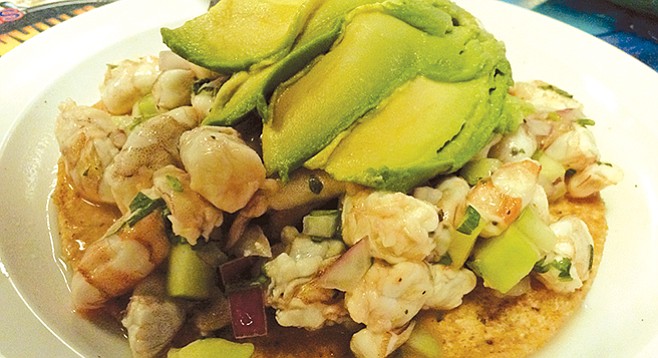 All I wanted was a poke place. Because poke places are popping up like mushrooms. They’re the thing. 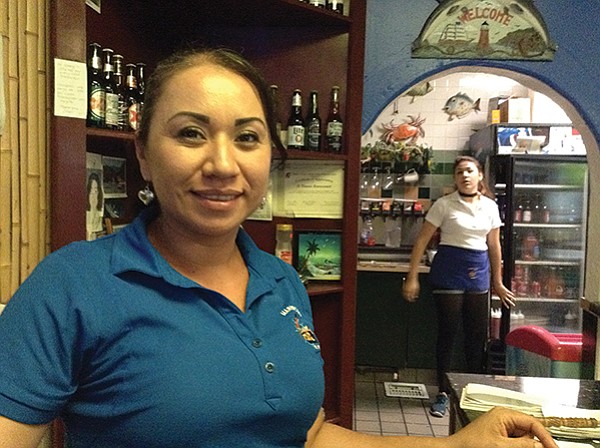 Adriana says the Titanic has been here 18 years.

I mean, raw fish makes it into the cool crowd’s diet? This I gotta see.

That’s what I thought, anyway. Spent the afternoon looking for raw-fish eateries in all the wrong places. Somehow ended up at 47th and Federal. No sign of the 13 bus. Decide to hump it north to University. 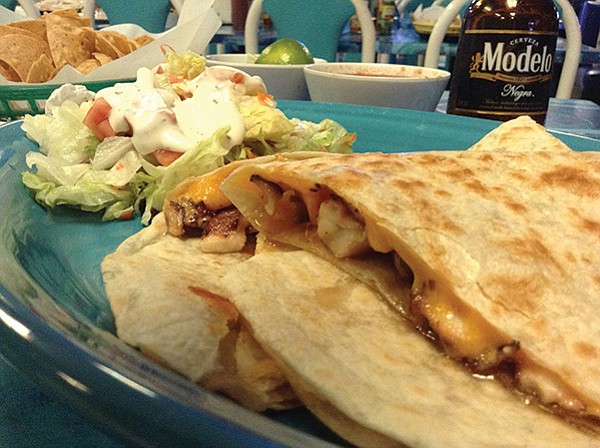 My quesadilla bulges with melted cheese inside and has big chunks of octopus.

Big mistake. Suddenly, the sidewalk runs out on this side, civilization disappears on all sides, and I’m heading down into a wild, uninhabited valley where the smells of manzanitas and other desert plants flood my nostrils. Cars zoom by, but then in the semi-dark, it’s a big, empty silence. Except for the ringing of a million cicadas. Amazing. 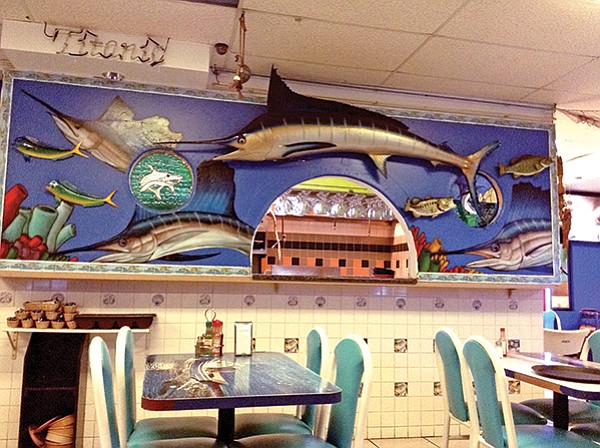 Way below, I see a dry river channel snaking like a Caesarian scar through the dark belly of the valley. We’re on a long, sloping, curving, way-high bridge. Oh right. Chollas Creek. Feels like an aerial view of ’Diego, 200 years ago.

Finally leave the crickets behind and — street lights! The first houses. Oh, brother. Checking the time. It’s heading for 9 p.m. Have walked maybe four miles. Then, at Dwight, ta-dah! Lights! Action! I see four red funnels coming at me right off a wall. It’s a picture of “El Titanic.” “Mariscos. Sea Food,” says the sign.

So, not a poke joint, but, any port in a storm (heh-heh). It’s all palapa-style palm-frond umbrellas on the blue-fenced patio, dolphins, speckle-backed manta rays, orange parrot fish swimming on the blue walls. And inside, Mexican music pouring forth, with tables full of people, chowing down.

The Brazilian Roberto Carlos is belting out that rousing song “La Montaña” as I set down. “Voy a subir la montaña.” “I’m going to climb the mountain and be nearer to God…”

Whatever. My eyes race over the glossy pages, searching for something I can handle. Not even thinking of fish in the raw anymore. First off, a cerveza to cool down. Get a Negra Modelo ($3.75).

I look around while I’m waiting. Lot of families fill long tables, some at the other end are watching big screens showing a life of Jesus in Spanish.

Adriana comes back with my tostada. And here’s where I get this funny feeling. Because I’m not looking at what I expected, curled up cooked shrimp, but little balls of, uh, raw shrimp, with a bunch of cucumber and a kind of vinegary brine, sitting on a flat corn tortilla. And on top, four big slices of avocado.

Of course, I should remember. Ceviche gets “cooked” in the acids of lemon or lime plus some heat from peppers.

Adriana sees me looking at it. “You don’t like it? I can get cooked shrimp if you’re not used to this.”

Because, ceviche, poke, both raw seafood, right? ’Course, the irony is ceviche has only been happening here in the States since the 1980s, a bit like the poke boom. Poke’s kinda just off the boat from Hawaii. Only started there in its current form in the 1970s. Popped up here around 2012. And yet both aren’t just old ideas. They’re ancient.

Ceviche may be new here, but south of the border, and back in Spain, we’re talking at least 2000 years. The word ceviche probably comes from the South American Quechua language. Back in the day, before the Spanish, they called their marinated shrimp “siwichi.” Or some say it came from the Arabic. Moorish women who came with the Conquistadors and Spanish colonizers brought a dish that might have looked just like what I’m eating. And they called it “assukkabag,” “meat cooked in vinegar.”

Whatever. The simplicity is the genius, and the corn tostada tortilla is the perfect foil for the sharpish taste of the shrimp. And a heck of a deal for $4.25. Plus, the magic is to eat it with a Mexican beer.

Problem: I’ve already given in and asked for another of the reasonably priced items — my first-ever octopus quesadilla ($8.75). It bulges with melted cheese inside and has big chunks of octopus everywhere. I give it some heat, like Cholula, to compete with the slight fishiness. But I like that the pulpo is tender and not rubbery, which means it’s nice and fresh.

But “Titanic”? Adriana says this restaurant has been here 18 years. Say, 1999. So, it had to have been inspired by the 1997 movie they shot at Fox Studios South, near Rosarito.

So far, I’ve spent $17.74 and learned something: maybe a sea change is happening, foodwise, in our fair country. America’s learning to eat raw fish. Not just sashimi from Japan, and now poke from Hawaii, but revived ancient local “cooking” traditions like ceviche.

And as for poke? I’ll keep trying. Meanwhile, gotta get Carla back for a raw breakfast on this great palapa patio.