The best part about being a bookstore owner

You buy a book new, and you have a new baby 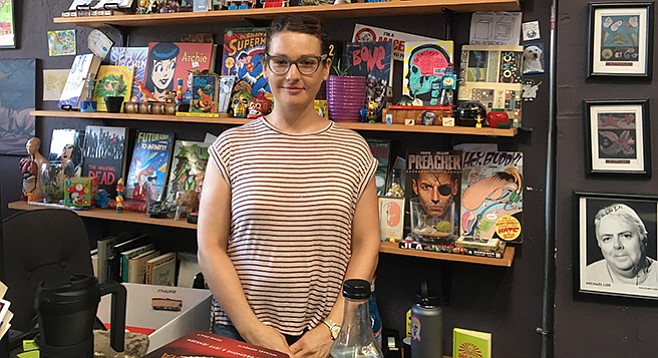 “Some Ross MacDonald short stories about the private eye Lew Archer. They’re kind of noirish. I really like Raymond Chandler and Dashiell Hammett, but I exhausted them a long time ago. This is post-Chandler, late ‘60s into the ‘70s, but very much the same style.”

“No, a little bit earlier than that. But in the same style — making it darker, like Parker did. I’ve been going back to that genre a lot lately. It’s fun and it’s light, but they also try to get into the psychology of the people — why they would run against the law — in a scary way.”

Why that particular book of short stories?

“It came through here; it was falling apart and I took it home. A lot of the books I read are things that I wanted to read but are also on their last legs and not salable. I think books have a life cycle. You buy it new, and you have a new baby, and it’s really precious. Maybe you take the dust jacket off to keep it nice. By the end of its life, which is usually when I get it, it’s very delicate. I usually end up having to recycle it.”

It’s speaking its last words to you.

Is one of those guys you favorite author?

“Oh, no. If I had to pick one off the top of my head, I’d say Nathan Rabin. He’s more of a film critic, and he’s really funny. He wrote for the websites The A.V. Club and The Dissolve, and he’s written a few books. He has two memoirs and a nonfiction book about following the Juggalos and Insane Clown Posse. He also has one that’s a collection of his online articles called My Year of Flops, and it is so great. I read it about eight years ago, and I’ve been reading it ever since.”

I’ve read those; at the end of his write-up, he decides whether a movie is a fiasco or a secret success. Have you ever watched any of his secret successes?

“Jamie Kennedy’s 2013 New Year’s Eve Special. Have you seen that thing? It’s ridiculous. I think he called it a secret fiascocess. I watch it every year on New Year’s Eve. It’s a tradition for me, and I never would have discovered that wonderful piece of anti-comedy without him.”

“A lot of books make me think about the world differently. I read a lot of novels, specifically because they give you a character with a different viewpoint. Even if it’s somebody you can identify with, it can be a situation that you haven’t experienced.”

Has an author ever made you identify with someone you didn’t expect?

“I really liked Jonathan Franzen’s novel Freedom. I guess that’s Franzen’s thing, making you really interested in characters who are not positive: they’re not role models, they don’t do anything heroic. They’re not necessarily the best people, and sometimes they’re lame people, but you definitely still identify with them. Most novels are told from the point of view of someone you want to win, because they’re good. He’s kind of mixing it up. He does nonfiction as well; I’ve got How to Be Alone on my bookshelf. I took it on vacation with me, and then brought it back. It’s close.”

Who do you talk to about reading?

“That’s one of the best parts of being here at the store, getting to talk to people about books all day. I always ask what people are reading. It’s a great way to find out something about a person, and also, to just see what might be good to read.”