A cornhole by any other name 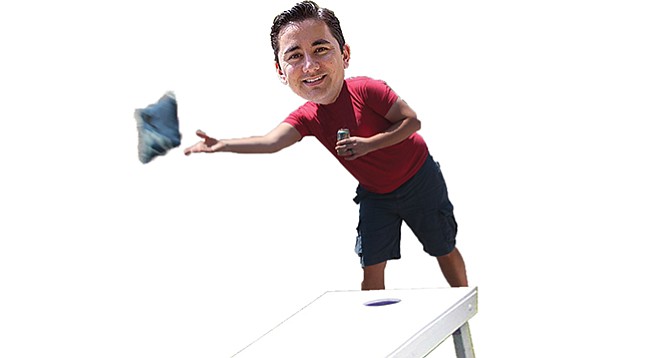 The name may have been changed to shield a city councilman from off-color jokes, but big money is still being provided by a lineup of city hall’s favored corporate special interests. Such is news about the annual summer event formerly known as Chris Cate’s Charity Cornhole Tournament — this year redesignated as Councilman Chris Cate’s D6 Charity Toss Tournament — set for Saturday, August 19 at Mira Mesa Community Park.

As reported here last September, “Cornhole or Corn Toss is similar to horseshoes except you use wooden boxes called cornhole platforms and corn bags instead of horseshoes and metal stakes,” per the American Corn Hole Association. Adds the group’s website, “The biggest reasons to play Cornhole or Corn Toss instead of horseshoes or other similar games is that Cornhole can be played anywhere and everyone can play Cornhole. If you can aim and toss a corn bag 30 feet, you can master the game of Cornhole — It’s great for family outings.”

But city hall wags drew attention to the word’s more common sexual connotations, with the joke being on San Diego Gas & Electric, provider of $5000 of the cash to host and promote the tournament bearing Cate’s moniker. The title cosponsor of this year’s contest, along with SDG&E, is Arkansas-based retail giant Walmart, which on April 30 forked over $5000 for the honor, according to a so-called behesting disclosure report filed by Republican Cate with the city clerk’s office July 14.

Gold sponsors, per Cate’s city website, include AT&T, Dart Container, AMR, COX, Hanson Aggregates, the San Diego Association of Realtors, California Strategies, Sudberry Properties, and Responsible Solutions, city-hall influence-seekers who have had repeated lobbying contacts with Cate and staff. Other spots of recognition are still for sale, according to the website.

There has to be a good joke in there, but I can't think of it. I bet Colbert would come up with a zinger or two.